Hello, and welcome to my second ever blog tour, celebrating Riptide Publishing’s release of my second ever novel, IRON & VELVET. Yay!  Thank you so much to That’s What I’m Talking About for hosting me. And, to you, dear reader, for stopping by. If you’d like to come with me and keep me company on my virtual wanderings, you can find a full listing of when and where I am here.

There’s also some kind of contest type thing happening.  I had a bit of trouble choosing a prize for this one because most of the things Kate likes (booze, cigarettes, knives, women) are illegal to ship internationally. I thought about a fedora, but then I remembered people had differently shaped heads and there was no point sending somebody an item of clothing they wouldn’t be able to wear. So, basically, that leaves coffee and Bovril and nobody likes Bovril except people from the North East of England. I’m therefore going offer 250g of Jamaican Blue Mountain, the nicest coffee in the known universe, purchased from a wonderful speciality shop, ground or beaned to your specification. If you don’t like coffee, I’ll replace it with an equivalently lovely tea. And if you really want to try the Bovril, I could probably be persuaded to throw that in as well.

If you’d like win this distressingly perishable souvenir please answer the three questions below (clues in the book) and drop me an email. I’ll announce the winner a handful of days after the end of the tour.

I’m told that one of the things that romance writers often have to field from people outside the genre is the “hur, hur how do you research your sex, hur hur?” question. Thankfully, nobody has ever dared ask me this, and now I suspect they never will because the answer is: “the same way I do fight scenes: with my partner.” Sad to say, this is a lot less exciting than it might sound.

Maybe I’m just an irredeemably unsexy person, but for me writing sex and writing violence are basically pretty similar: they’re complex physical manoeuvres involving two or more people, frequently enacted in low lighting, and a lot of the time the most important thing to keep track of is where everybody’s hands are.

There’s a weird contradiction at the heart of any physical scene in that intensely physical actions are, by their nature, not particularly verbal. But, obviously, in a written medium you have to communicate a lot of what’s happening to the reader in a way that you absolutely wouldn’t articulate it to yourself if that was happening to you. To put it another way, you need to create the sense of being in a fight or having sex using an experience which is nothing like being in a fight or having sex. In practice, I tend to go in slightly different directions for the two. In sex scenes I get quite flowery because language to me is erotic in itself and this is the best way I know how to transfer that sensuality from medium to another. For fight scenes, I try to be as precise as possible because, whereas in a sex scene, you trying to communicate how something feels. In a fight scene you’re trying to communicate how something looks. But, in both cases, what’s important is the reader being able to read the scene without their tripping up and going “hang on, what’s actually happening here, could he really reach that, how many hands does she have anyway?”

The best description of a fight I’ve ever read comes from Chapter Five of The Maltese Falcon in which our hero punches out a gay man.

“His right shoulder raised a few inches. His bent right arm was driven up by the shoulder’s lift. Fist, wrist, forearm, crooked elbow and upper arm seemed all one rigid piece, with all the limber shoulder giving them motion. The fist struck Cairo’s face, covering for a moment one side of his chin, a corner of his mouth and most of his cheek between cheekbone and jawbone.”

Damn. That’s a good punch. I think what I like about his paragraph is that firstly it’s a technically accurate description of how you’d deliver a right hook to somebody’s face, but secondly and more importantly it manages to be clear at every stage about what is happening while at the same time only creating a full picture at the end. There’s a kind cold detachment that saturates Hammett’s writing, and very often you’ll have quite a specific idea of what Sam Spade is doing but no idea what it actually means.

I don’t write like Hammett. In an early draft I tried but it really didn’t work. You just can’t alienate the reader that much in a book with strong romantic elements. Also, to an extent, it just wasn’t fun. I hope Kate retains a bit of Hammett, and she’s not the most forthcoming protagonist, but compared to Sam Spade or the Continent Op she’s a bag of kittens and rainbows. And I also tried keep a style of writing that created a strong, clear sense of physical reality.

As always, it’s not my place to say whether this worked or not but, for all the time I spent standing on one leg to see if you pull a knife out of a pair of tight jeans or blocking out fight scenes with wooden spoons, I damn well hope it did. I was probably a bit anal about this because I have a vague interest in historical armed combat but I tried to make sure that most of the things people did in the fight scenes were things it more or less made sense to do in that situation. So things like, what openings you’d attack into, how your opponent would cover those and how superpowers would play into the whole mix.

And all this really wasn’t something I could have done on my own. Many times over the past year, my partner was just settling down to watch TV only to be hoiked up and asked to take the role of a five foot four lesbian vampire or a terrifying sewer monster armed with, well, with the plastic mop.

Alexis Hall was born in the early 1980s and still thinks the 21st century is the future. To this day, he feels cheated that he lived through a fin de siècle but inexplicably failed to drink a single glass of absinthe, dance with a single courtesan, or stay in a single garret. He can neither cook nor sing, but he can handle a seventeenth century smallsword, punts from the proper end, and knows how to hotwire a car. He lives in southeast England, with no cats and no children, and fully intends to keep it that way. 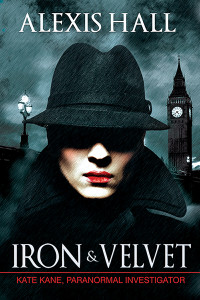 First rule in this line of business: don’t sleep with the client.

My name’s Kate Kane, and when an eight-hundred-year-old vampire prince came to me with a case, I should have told her no. But I’ve always been a sucker for a femme fatale.

It always goes the same way. You move too fast, you get in too deep, and before you know it, someone winds up dead. Last time it was my partner. This time it could be me. Yesterday a werewolf was murdered outside the Velvet, the night-time playground of one of the most powerful vampires in England. Now half the monsters in London are at each other’s throats, and the other half are trying to get in my pants. The Witch Queen will protect her own, the wolves are out for vengeance, and the vampires are out for, y’know, blood.

I’ve got a killer on the loose, a war on the horizon, and a scotch on the rocks. It’s going to be an interesting day.

You can read an excerpt and, y’know, cough, buy the book, if you want, at Riptide Publishing.

Thank you, Alexis, for stopping by the hosting another fun giveaway! Readers: please check out B.’s review of Iron & Velvet HERE.