Hi everybody and happy holidays! And thanks to Twimom and Book Nympho for having me here!!

I thought it might be nice for the secret agents of the Association to use their devious and dirty minds on something PG-rated and non-violent for once. So I gathered them for a holiday cocktails and asked for wholesome suggestions on how readers can cope with the holidays!

Here are their suggestions.

Set up your exit strategy on the front end.

Are you going to a holiday dinner or party that you might want to escape early from? The secret agents of the Association suggest you set up your exit when you walk in – let your host know how much you wanted to come but you have [a meeting with a source, need to decode something, have to kill somebody and they are leaving the country tonight!]. That gives you a chance to say something nice at the beginning, and you can slip out without your host feeling like you are leaving because the party was bad. Er…okay, that’s sort of helpful, I guess.

Some things are best forgotten.

Like milk. Cereal. Eggs. I was surprised at this suggestion until the secret agents explained that it is impossible to have sex in a houseful of people. Out of milk? Time to go to the store with your woman, and if somebody ends up against a wall in a dark alley or parked on an overlook, well, all the better. I stopped the discussion there and informed the agents that I was looking for wholesome suggestions in the holiday spirit.

Here’s a fun secret agent hint! Nothing prevents closet snooping like wrapping up some random item and putting it under the tree. Also recommended if you either haven’t gone shopping, or something about the real gift will give everything away. Finally, a wholesome suggestion!

Have the right candy.

I was surprised how intense the secret agent were about candy canes. I guess they are festive! What with their red and white stripes. It was here the hunky guys started looking at each other uncomfortably. Riley said something about “the candy cane trick.” Some sort of magic trick, I wondered?

Not. Cole explained to me that the trick is where a person bites off a piece of candy cane and sucks it, getting her mouth super minty. Then she tucks it into her cheek and proceeds to give an awesome blow job with a wild mint rush. I was appalled! I informed them that this was not the holiday spirit I was hoping to display on Twimom’s wholesome blog!

Use knowledge to destroy the villain.

Will your politically annoying brother-in-law be  at Christmas dinner with his enraging political opinions? Will your pretty cousin be there making mean comments? According to the Associates, when slitting throats is out of the question, the best way to stop annoying conversations is to ask them about what they love. How are the Corgis? How is that needlepoint going? What’s new in the world of stamp collecting? Congratulations, you’ve destroyed the conversation while looking like the good guy.

Ruthlessness 101: Give toys you want to play with.

I thought this was cute. Like the time I gave my sister the Barbie Penthouse I needed for my Barbie. No, no, the agents explained. I narrowed my eyes. What? Maybe I shouldn’t have been too stunned when I learned that the most popular gift secret agents give their significant others is sex toys and lingerie that they have specific dirty plans for. Yeah, that’s nice. That is some generous holiday spirit.

Techie-minded Fedor came up with this one: when doing online shopping at a shared computer, disable the cookies. He even offered a good website: http://www.wikihow.com/Disable-Cookies I thanked him for this non-sex-obsessed hint. The secret agents then went on to have a long conversation about how annoying it is for people to use the computer and expensive lingerie and high-heeled shoes are showing up in the sidebar ads.

Be open about the no-go zone.

According to the secret agents, the best way to keep people out of a room when booby trapping is inappropriate is to announce that you will be wrapping presents in that room. This seemed reasonable. Who wants their surprises to get wrecked? A great holiday suggestion! Until it became clear that my secret agents often found themselves ‘wrapping presents’ in various rooms with significant others often during the holidays. Yeah, yeah, yeah, okay, I get it.

Have the right tools for the job.

Plenty of ribbon on hand! This seemed like good advice. A present isn’t really that pretty when it isn’t wrapped with a pretty bow! Especially that thin ribbon that you can curl…at this point, the agents started shaking their heads and grumbling. What? What the hell is wrong with thin ribbon? It was here Dax explained that the thin ribbon can cut into a woman’s wrists and ankles when you tie her to the bed posts. The agents all agreed that fat ribbon feels better, and it’s also incredibly strong if an actual dangerous person comes around. O-kay.

The holiday tradition is rich in fun holiday characters, and the Associates had surprisingly strong opinions on them. Macmillan felt that Santa was “too obvious” what with the whole “have you been naughty or nice bit,” and the other agents agreed. They felt elves seemed too “tiny and cute” and therefore were “a no go.”  Huh? What’s wrong with tiny and cute? A few of them reported that Grinch sometimes had “interesting possibilities,” whatever that means. I asked about Frosty and they were all like, “no way!” I asked about my favorite character, Rudolf, and they all looked at me weird. And somebody made a joke about furries. It was here I realized they were talking about sex role playing characters. Niiiiice. The most popular sex role playing character for the secret agents is apparently “Santa’s bad, bad helper.”

Well, needless to say, I stopped the conversation at this point. I’m sorry, Twimom, these are not the wholesome holiday suggestions I had hoped for, but maybe your readers can get something out of them! 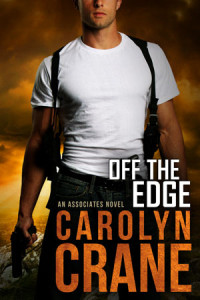 SHE MAY BE HIS WORST ENEMY…

For deadly secret agent Peter Macmillan, language is a weapon—one he uses to hunt criminals, destroy plots, and charm enemies. Seducing information out of a beautiful singer in Bangkok hotel should be easy…except this particular singer has the power to destroy his cool façade, and with it, his last defense against a dark past.

HE MAY BE HER ONLY HOPE…

He tricked her. He helped himself to her body and her secrets. He has enemies everywhere. Laney Lancaster should hate Peter, but when she discovers him shirtless, sweaty, and chained up in the hotel’s dungeon, all she can think about is freeing him. Because she knows what it’s like to be trapped and alone. And she could use a dangerous friend.

You can find Carolyn on the web at:

Carolyn is offering up one (1) digital ARC copy of Off the Edge to one lucky commenter. To enter, just leave a comment letting Carolyn know one of your own holiday tricks to get through the season or which secret agent trick you might use and fill out the Rafflecopter form, below. The giveaway is open internationally, where not prohibited by law. Winner will be selected at random from the eligible entries. Giveaway open from December 13 to December 18, 2013 at 12:00 AM EST. Open to all readers, 18 years or older, who are legally allowed to participate in such a contest as allowed by their local laws. All federal, state, local, and municipal laws and regulations apply. Void where prohibited. No purchase necessary. By participating in the contest, participants agree to be bound by the decisions of the contest sponsor.

Please email me at twimom227 (at) gmail (dot) com if you have trouble entering.

Now, head over the THE BOOK NYMPHO to see today’s feature with Jodie Griffin.