Cory stared through his windshield at the decorated house before him. He clicked on the radio attached to his uniform.

“Has anyone been by to see what the Linford’s have done this year?”

There was a crackle on the radio before the voice of Colin, the Deputy Police Chief, came over. “Saw him working on it today when I drove past. From what I saw it looked like Christmas Vacation and that one with Tim Allen and Jamie Lee Curtis collided.”

“Don’t forget that one with Arnold and Matthew Brodrick.” Cassi piped in.

Cory tuned out the chatter on the radio, they conversation taking him back to the night before after Averie had helped him decorate his tree.

“So which movie do you want to watch first?” Cory asked, placing the tray of hot chocolate and Christmas cookies his mom had sent over on the coffee table.

Averie held up a dvd, he didn’t recognize the cover, and he was certain he had almost all the Christmas movies ever made, except for those made for TV movies, in his collection. A fact that his brothers and friends teased him about mercilessly, and yet every one of them had asked to borrow most of them every year. 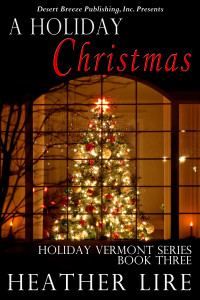 “The Forgotten Carols. My roommate in Phoenix introduced me to it. It’s actually a play that is put on every year by the creator. He travels around the west coast doing, and when he was in Phoenix she took me to see it, it’s become one of my favorite holiday movies.”

Cory put the movie in a settled into the corner of the couch, Averie curled into his side. The feel of Averie’s body pressed against his distracted him the story about a nurse and a patient telling her stories about some forgotten carols.

The kisses they’d shared throughout the day had fueled a fire that had started months ago. Averie tipped her head back, he didn’t resist the temptation and pressed his lips to hers. Her mouth opened under his and he took full advantage of it and swept his tongue.

The combination of chocolate, peppermint and Averie was going to drive him insane, but what a way to go. He lost all interest in the movies and shifted their bodies so they were stretched out on the couch, her beneath him. The press of his cock against her core, even through two layers of jeans had him ready to blow.

“Officer Evans answer the goddamn radio.” The angry sound of Colin’s voice jolted him back to the present. He had to adjust his suddenly tight uniform pants, the memory of Averie’s body had caused.

He cleared his throat and prayed it didn’t quake as he answered, “I’m here, what’s up?”

Cassi’s chuckle rang over the air waves, “Ten bucks he was dreaming about a certain school teacher.”

“Mrs. Hutchinson called reporting hearing noises across the street go check it out.”

“On it,” Cory pulled away from the Linford’s house and put away the memory of the night before. Mrs. Hutchinson called the station at least three times a week to report suspicious noises, and it was almost always nothing, but this time of year you never knew what to expect, so he’d go in cautiously, verify it was nothing, and then swing by Averie’s place as it was a couple of blocks from Mrs. Hutchinson’s and talk her into parking in cop car.

Want to know more about Cory and Averie? Discover their story in A Holiday Christmas book 3 in the Holiday Vermont Series.

There’s magic in the air this Christmas Season in Holiday.

Averie Baldwin wants nothing to do with men. But her family and friends are determined she won’t spend her first Christmas back in Holiday, Vermont alone. So far she’s managed to avoid all their attempts to set her up on dates. Until she’s chosen to represent the school district in the town’s annual Christmas play…with the sexiest man she’s ever seen.

Corey Evans has a job he loves, great friends and a loving, if interfering family, but something is missing. When Averie shows back up in town he knows exactly what he needs in his life. Her. Getting to know her however has proven difficult, until they are thrown together on the annual Christmas play.

Connect with Heather on the web:

Now, head over the THE BOOK NYMPHO to see today’s feature with Cecy Robson.