In the crisp night, perfect rare snowflakes fell over Santa Monica Boulevard, and traffic two blocks down either direction had miraculously detoured, when I felt a gentle tug on my right wing. I huffed out an annoyed sigh and glanced down, meeting Gunna’s big blue eyes. Cherub cheeks, rosy from the sudden freezing temperatures, plumped as her cute smile widened.

Dropping my gaze further, I found one of my still-attached feathers between her fingers. Her tiny thumb brushed down its coal-black length.

“Skorpius, can I have one?”

I snorted. “Can I pluck a blond ringlet from your head?”

Indignant, she dropped the feather. “No! You canna have my hair!” She glanced at Connell then back to me, the three year old incredulous at the suggestion.

I smiled slowly, a single eyebrow arching. “Then no, you may not have a feather.”

Young Connell stepped a foot onto the glistening street, but I placed a hand on his shoulder, stopping him. Although I’d shrouded us to avoid direct attention, proceeding with caution around scurrying last-minute shoppers seemed prudent.

“C’mon, heathens. We’ve a mission to accomplish. And my babysitting patience wore thin an hour before it began.”

“What’s a heathen?” Connell grasped his sister’s hand as I released him, and we finally crossed. The four-lane street, peculiarly absent of motor vehicles, suddenly teemed with pedestrians gaping up at the miracle of snow in California on Christmas Eve.

“You are.” A smirk curled my lips. “Feel free to share the insightful revelation with Brigid.”

“Brigid! We’re seein’ Brigid again?” The children simultaneously squealed in a decibel only detected by dolphins. And apparently angels.

“Only once we finish our task. Rewards go to the focused. Prove your worth, heathens.” It took immense strength to press my lips into a firm line before I burst into laughter. Even if the little ones didn’t get my humor, the trip needn’t be dull.

A twenty-first-century shopping excursion may have been a poor choice for medieval toddlers dressed in cloak-covered bedclothes, but strong intuition suggested the main item on my list existed only in this time, in this place. Next stop, however: treats.

The pink neon Sprinkles sign lured dozens of shoppers in dire need of a sugar hit, but the line snaking down the sidewalk conveniently parted upon our arrival. No one looked directly at the spectacle in their midst; they were unable to.

If they saw the reason they’d been compelled to step aside, pandemonium would break loose, likely with paparazzi popping out of the woodwork—an enormous angel with eight-foot midnight wings didn’t make appearances in the Earthly realm often. Instead, due to my ability to vibrate oxygen molecules around us, their vision grew unfocused when it strayed our way, and they unconsciously gazed elsewhere.

The children had their faces pressed to a glass display case housing a confection-filled wonderland, drawn by rainbow-colored creations designed to make mouths water on command.

Connell glanced up at me as I, too, surveyed the selections. “That’s a cupcake?”

“Indeed, an actual cupcake. Brigid and Isobel like to poke fun at the dragon.”

Her gaze drifted down the span of my wing, and I imagined her small mental gears turning.

“In a manner of speaking, yes.”

I gestured to several choices and paid the cashier. The woman carried out the transaction, never looking at her customer and forgetting to collect payment.

I’m forever amazed at the voracious appetite of humans, and the heathens were no exception. We ventured off to our next destination, but the cupcakes were devoured in silence before we rounded the first corner. Gunna refused to give up the wrapper until every last remnant of dark chocolate frosting had been sucked off the wrapper edge.

As we trespassed onto a golf course, I asked a soft-spoken question. “Want to ride the dragon?”

The response was the barest whisper from Gunna. “Can I?”

To my begrudging dismay, time around the heathens had turned me into an oversized teddy bear. Although no permanent damage had yet been done, I’d have to watch my melt factor.

I knelt down. “Connell, hoist your sister up. Gunna, grab my neck tight.” Before I instructed the boy where to go, he’d already climbed aboard, hugging Gunna into place between the bases of my wings and gripping his legs to my ribs.

Barely detecting their weight, I altered the air molecules surrounding their bodies, creating a pressure seal, joining us as one. No need to chance an accident if one of them threw a hand outside the ride.

From my crouched position, I burst up, spread my wings wide, and caught an updraft of heat above the expanse of manicured grass. We soared.

When I leveled off, I heard gasps and smiled, appreciating their amazement at flying while city lights twinkled in the darkness, like millions of diamonds scattered to the night. I’d been born the creature I was, but I still reveled in rare moments of happiness.

Our destination soon appeared, modern apartments with floor-to-ceiling bay windows coming into view on the horizon. I hovered outside the correct second floor unit, popped open a window, and rotated, positioning my cargo nearest the entrance.

By the time I maneuvered my body and wings through the narrow window frame, I felt like Santa after shimmying down a damn chimney. “Next time, the front door.” I muttered.

Isobel’s abandoned apartment seemed peaceful in the moonlight-dappled shadows. A kept time capsule due to her ongoing family trust fund, everything remained exactly as she’d left it that fateful morning when she slipped through time.

The children split apart and gravitated toward all the sparkling wonders the twenty-first century had to offer, silent on the beige carpeting in their leather-booted feet.

My growled command stopped Gunna from lifting the TV remote. No need to wake the neighbors in the middle of the night after eight months of utter silence.

On Isobel’s bedside table, I located my intended target. Secured within a black leather cover was her Kindle Fire, still plugged into its charger. I pressed the power button, flicked through the screens, and verified she had an extensive unread library. “Perfect.”

I glanced over and let out a sigh as Gunna clutched a limp-limbed stuffed lamb to her chest. “Sure. Why not? Connell, see anything you like?”

The boy appeared from the hallway with an object partially hidden in the folds of his cloak.

Fabulous. Not only would I smuggle a Kindle and a Radio-Shack-lifted solar charger to medieval Scotland, but I’d transformed the kids into thieves on our holiday jaunt.

Connel pulled his hands out and held up an antique magnifying glass. An intricately carved brass handle supported its convex lens. Although no antiquities expert, I knew the invention appeared long before clans existed in Scotland, so neither of their objects would wreak historical havoc.

Our ragtag crew of Santas-turned-cat-burglars huddled together. They gripped their found treasures, and I held the children in my arms as unbidden tears sprang into my eyes.

And reappeared in the great hall of Brodie Castle, right as its residents began to wake on Christmas morning…

(Read the holiday adventure Bound by Wish and Mistletoe for more Christmas at Brodie Castle!) 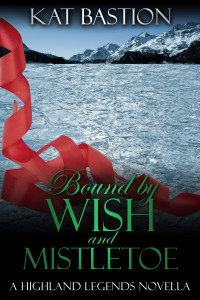 Desperate to honor a life-long promise, Susanna MacEalan escapes her abusive clan with the fierce determination of never falling under the power of a man. Ever.

When magick transforms Brodie Castle into a Christmas wonderland, the two despondent souls find solace in a most unexpected place . . . each other’s arms.

Amid a whirlwind of escalating events, Susanna’s traumatic past threatens Robert’s ability to protect the one woman meant for him. In a harrowing moment, as her fears and demons coalesce, will hope, faith, and love be enough to save them? 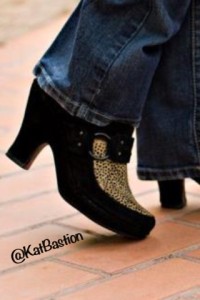 Kat Bastion is an award-winning paranormal romance writer, poetic warrior, and eternal optimist who loves getting lost in the beauty of nature.

On a never-ending, wondrous path of self-discovery, Kat throws her characters into incredible situations with the hope that readers join her in learning more about the meaning of life and love.

Her first published work, Utterly Loved, was shared with the world to benefit others. All proceeds from Utterly Loved, and a portion of the proceeds of all her other books, support charities who help those lost in this world.

Kat lives with her husband amid the beautiful Sonoran Desert of Arizona. Visit her blog at www.talktotheshoe.com, her website at www.katbastion.com, and her Twitter account at https://twitter.com/KatBastion for more information.

Kat is offering up a signed paperback copy of both Forged in Dreams and Magick and Bound by Wish and Mistletoe to one lucky commenter. To enter, just leave a comment letting Kat know where you will be spending the holidays and fill out the Rafflecopter form, below. The giveaway is open internationally, where not prohibited by law. Winner will be selected at random from the eligible entries. Giveaway open from December 10 to December 16, 2013 at 12:00 AM EST. Open to all readers, 18 years or older, who are legally allowed to participate in such a contest as allowed by their local laws. All federal, state, local, and municipal laws and regulations apply. Void where prohibited. No purchase necessary. By participating in the contest, participants agree to be bound by the decisions of the contest sponsor.

Now, head over the THE BOOK NYMPHO to see today’s feature with Kelly Meding.