Christmas, huh? It’s still kind of a thing, even with the human race spread out across the galaxy and travelling even further. Things like gifts take a little creative planning.

Oh, it’s not about the cred. Got enough saved up for decent gifts. It’s what to give.

Skuld would probably appreciate a nice set of spa things like shampoos and conditioners and soaps. Girly stuff. The rest of the crew doesn’t really exchange gifts. It’s kind of awkward. But Skuld, Skuld’s always been different. So we all exchange with Skuld because she always thinks of us.

But I’ve got a friend now. Someone off the ship. I’ll need to think of something for Boggle. Hard to figure out something he’d like that he couldn’t get for himself. He is the man tapped into all the connections.

And there’s Rygard. Skuld says I should send him digital stills of me. But what could he want them for? Not sure. But she mentioned it to Dev and he said something that makes me think harder on it.

He said a soldier travels light and sometimes wants more than a memory to look at.

Rygard and I … we keep in touch via holo when we can. But we both have blackout times, when we’re running missions. We can’t always be ready to answer the call. And I’m guessing the whole long distance relationship thing hasn’t changed much over the centuries back when humans did this on Earth. Continents and oceans apart, or galaxies and light years. It’s still a challenge.

But if I let Skuld take the pictures she thinks Rygard will like, this is going to get awkward again.

Look for Fighting Kat, due for release from Carina Press on January 13th 2014.

Interested in reading more about Kaitlyn? Comment for a chance to win an ecopy of Hunting Kat, Book 1 of the Triton Experiment series. Details of giveaway are below.

In the meantime, check out my most recent release: Sing for the Dead, Book 2 of the London Undead series. 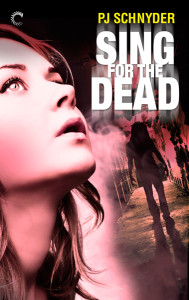 Kayden, a lone were-leopard allied with the London werewolf pack to keep the zombie infestation in check, is used to working solo—until he discovers a beautiful fae woman surrounded by the aftermath of battle. He’s immediately drawn to Sorcha, but quickly discovers she’s much more than a pretty face.

Half Bean Sidhe and half berserker, Sorcha trained over centuries to become the perfect warrior. She agrees to work with local weres to investigate a new type of zombie capable of coordinated attacks—and is partnered with Kayden. He’s strong, darkly handsome and completely unafraid of her. And his kiss fills her with insatiable desire instead of bloodlust.

As Kayden and Sorcha work together, their attraction grows and their deepest scars are bared to each other. But with the force behind the deadly new zombies poised to overwhelm the city, Sorcha can only pray that the next time her bloodlust strikes, Kayden isn’t among the fallen…

Available at Carina Press and Amazon.com and Barnes & Noble and All Romance eBooks

PJ is offering up one (1) digital copy of Hunting Kat to one lucky commenter. To enter, leave a comment for PJ telling her your favorite holiday drink in the comment section below and fill out the Rafflecopter form.  The giveaway is open to all, where not prohibited by law. Winner will be selected at random from the eligible entries. Giveaway open from December 3 to December 10, 2013 at 12:00 AM (midnight). Open to all readers, 18 years or older, who are legally allowed to participate in such a contest as allowed by their local laws. All federal, state, local, and municipal laws and regulations apply. Void where prohibited. No purchase necessary. By participating in the contest, participants agree to be bound by the decisions of the contest sponsor.

Please email me at twimom227 (at) gmail (dot) com with any problems using the Rafflecopter form.

Now, head over the THE BOOK NYMPHO to see today’s feature with Jessica Scott.