A Breath of Winter 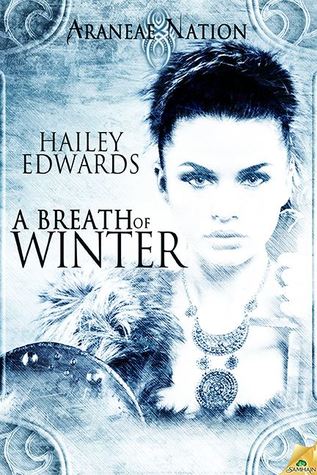 I have to start by saying that it’s difficult to categorize Haley Edwards’ books into a genre. I enjoyed A Breath of Winter and basically read it in a day, but I feel that others might find this title problematic if they’re not avid readers of the Araneae Nation titles.

Here’s what new-to-the-series readers may find lacking in this title: original information that moves the plot forward. The reason this wasn’t a problem for me was because I found the info provided valuable to the backstory and cleared up some things left over for me from other titles. This is the ONLY reason I’m not giving it an A or A+ rating.

I felt, while this was a transitional book in the series, that Ms. Edwards moved the plot arc forward, which is critical in all titles of a series. I really liked the use of the harbinger as a plot device, and especially the way Ms. Edwards tied up loose ends toward the end of the book. I wasn’t sure why the harbingers had been introduced in Book 3, but now I completely understand why, even though I still have more questions that I’m sure will be answered in Book 5 of the series.

As far as minor characters, I really enjoyed Zuri’s brothers. They were important to the plot, and moved things forward. They were typical brothers, and wanted nothing more than to protect their sister. Even though she didn’t need it, most of the time. The importance of the Ursas cannot be down-played, however. I felt that by giving Zuri’s Ursa personality and emotion that we learned more about this domesticated animal, and their purpose within the plot.

Henri, Maven Lourdes’ brother (several steps removed from the possibility of taking the throne) entered the story as a doctor/alchemist/herbologist. What really drove the plot for Henri was searching for a cure for the ‘plague’. While the romance simmered under the surface between Zuri and Henri for, like, ALL of the book, I found that I was rooting for them to take things further from nearly the beginning. Henri was, however, a character steeped in guilt because of his reasons for bringing Zuri and the harbinger to their nest. Even with his sister’s blessing, he still felt as though he were entirely responsible for the outcome. Which I didn’t like.

The ‘plague’ seemed to be given enough characteristics and details in A Breath of Winter to give it life. We learned several details about it that I don’t recall from the previous novel, and that made it more realistic, ala The Walking Dead for me. (Keep in mind, I’ve just recently watched seasons 1-3 of TWD and we’ve started season 4…)

Zuri, the main character, is telling the story. Powerful characters telling a story are one of my faves. This first-person perspective, while leaving out a bunch of stuff that could have come to light with an omniscient point-of-view, was perfect for this story. Without revealing too much, Zuri’s take on everything hinted at the budding romance between her and Henri, as well as the conflicts that underscored the plot. I liked her voice and was really entranced with her story-telling. What wasn’t said, during her sleep/coma episodes, was something I really want to know, however. What did her brothers **really** do? How did Henri behave? There were a couple other aspects of Zuri’s perspective that left me guessing as well, but by the conclusion of the story I was satisfied as a reader. For now.

While we didn’t see much of prior characters, we did see the over-all plot arc progress significantly. I’m interested to see what Ms. Edwards does with the harbingers in the future, and how things with Zuri and Henri go, as she’s pretty much tied to him for the rest of her life (yes, that’s all I’m giving you…). I’m also very interested in seeing whether Henri’s ‘vaccination’ against the plague is effective and whether Mana’s ‘cure’ is valid in subsequent titles.

All-in-all, I really liked A Breath of Winter, the fourth title in Hailey Edwards’ Araneae Nation series. I always look forward to her new titles in this series, and can’t wait to see how she creatively and purposefully moves the over-arching plot for the series forward with her next book.

Zuri and her mercenary brothers had a simple mission. Transport a captured harbinger to Erania and collect the bounty. But this job turns out to be anything but easy.

Their welcome to the northland is nothing short of frigid. A scuffle with border guards and her prisoner’s attempted escape leave Zuri injured—and she and her brothers stuck in quarantine. Worse, the bounty comes with silken strings attached. Strings held by a scientist with a daring, dangerous plan.

Because Zuri and her prisoner barged in before his fail-safes were in place, Henri had no choice but to lock them all down until he’s sure there’s no risk of spreading plague. He’d planned to study the harbinger, but it’s the mercenary holding the leash who intrigues him the most.

When Henri’s experiment goes awry, they learn they’ve all been pawns in a plan with one goal: bring the Araneae Nation to its knees. Zuri is forced to make a choice that could sign her death warrant—or sacrifice everyone she loves.