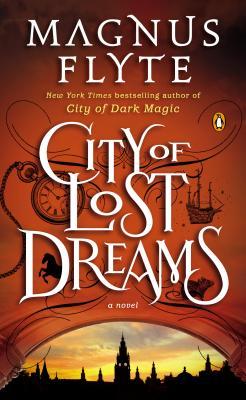 I was excited to read City of Lost Dreams, sequel to City of Dark Magic, by Magnus Flyte. What I wasn’t counting on, however, was the time it would take me to savor this beautifully written novel that reaches my classical artistic and musical sides that are so frequently tucked into a tiny drawer, waiting to be let out to play. However, this title is so skillfully written, I fear that others will become as entranced with the music and art mentioned as I have been. Which means that the websites I usually visit to feed the art monster are going to load a bit slower.

The story opens with a great summary of the previous title. I’m not  counting the Prologue – I’ve not figured out how that piece fits in quite yet. I like the way Flyte recaps Pollina and her delicate medical condition and her history with Sarah. How Nico is so old and little and about his gregarious attitude and demeanor (as well as his alcoholic tendencies). We also see Max again. And that familiar spark between Sarah and Max sparks. Helga? Helene…Harriet. Yes, It’s Harriet.

“He was about a half step away from seeing Rudolph II on a piece of toast.”

Sarah was talking about Max here. I laughed-out-loud remembering the GLEE episode where Finn has a grilled cheese sandwich that he believes has the face of Jesus on it. I thought this sentence totally captured the essence of Max. He’s a dreamer that is looking for his Holy Grail – one day, he’ll find it. I was a little sad that we didn’t see more of Max in this title. I surely hope that there’s a third book that will fill us in on what’s been going on with him!

What I like most about Pollina – Pols – is how direct and honest she is. Her observations about a situation seem to be spot-on, and while she can’t see – due to her blindness – she seems to be quite intuitive. And she’s more self-aware than others realize. I cried at how beautiful her soul is.

Sarah says this to Harriet, Max’s new girlfriend when she talks about writing a historical fiction novel about Elizabeth Weston, a contemporary poet of William Shakespeare, prior to Pols concert. Foreshadow much?

Phillipine Welser created an alchemal blend – found strictly by chance – that Nico was sure would help Pollina’s illness. Driven by the need to boost her immune system, Nico’s preoccupation with saving the petite musical genius was at the forefront of most of his thoughts. Nico, however, was turning senile. Or having memory lapses due to his intoxication. I think that his longevity played part, but surely his altered state-of-mind aided in his confusion. At the beginning, I became worried about Nico. Eventually, however, everything worked itself out with Nico.

Alessandro, Sarah’s former roommate, was decked out for an Austrian ball when Sarah arrived in Vienna. She, too, would wear the appropriate costume after chiding from Alessandro – and becoming privy to his charms and plan – for Pols, and for Alessandro’s promise that he wouldn’t post pictures on Facebook. Maybe. I love Alessandro. His pure sensuality and his reverence for Sarah as not a conquest but an equal make him lovable for me. Alessandro is an integral player in the story, but not really important. Without him, things would have been weird for Sarah, and she wouldn’t have had a support in place for several key events.

The mysterious Dr. Muller, whom Sarah believes holds the key to saving Pollina, becomes the center of intrigue as Sarah’s brief meeting with her at a ball leads Sarah on an ominous errand that begins a flurry of activity that drives the novel. All. The. Way. To. The. End.

Sarah Weston, the main character in this title, seems to be in the thick of things. The time-altering drug, Westonia, makes another appearance in this book, and we learn new things about Sarah and her use of the medication. Sarah learns things about herself, and her relationship with others. Just. LOVE.

One thing I love about the Flyte books is the way they bring alive music and art. I found the descriptions of Klimt’s Beethoven frieze, based on the master composer’s Ode to Joy, beautiful and haunting. As though I were actually there, in the museum, gazing upon this masterful artistic interpretation of one of Beethoven’s best-known pieces. I also am enamored with the fact that the authors have combined two things that make my heart complete. Okay. More than two. But the way music and art are infused throughout the title are important to me, reaching me on much more than a superficial level. With a B.A. in music as well as nearly a minor in art, I’m that person your mother warned you not to travel to European countries rich in music and art history with.

While reading, City of Lost Dreams was rather slow-going for me (because I kept hitting Google Images to refresh my memory on a piece of art, or pulling up music mentioned because those “Oh! I haven’t heard that in YEARS,” moments happened. Often.), I do love stories that infuse history (especially history that is familiar to ME) into present-day. It’s difficult to define the genre of this title, and by doing so, I think that pigeon-holing may exclude some readers. But even if someone isn’t versed in the art and music history of the Romantic and Classical eras, there’s some fabulous descriptions that may pique interest in pieces mentioned. While it is recommended that City of Dark Magic is read prior to picking up this title, Flyte does a good job with infusing backstory and reminding the reader of what happened enough that someone could jump in with this book. Although, I’m pretty sure that after getting a taste, readers would probably want to pick up the first title.

Rating: A — Loved It

In this action-packed sequel to City of Dark Magic, we find musicologist Sarah Weston in Vienna in search of a cure for her friend Pollina, who is now gravely ill and who may not have much time left. Meanwhile, Nicolas Pertusato, in London in search of an ancient alchemical cure for the girl, discovers an old enemy is one step ahead of him. In Prague, Prince Max tries to unravel the strange reappearance of a long dead saint while being pursued by a seductive red-headed historian with dark motives of her own.

In the city of Beethoven, Mozart, and Freud, Sarah becomes the target in a deadly web of intrigue that involves a scientist on the run, stolen art, seductive pastries, a few surprises from long-dead alchemists, a distractingly attractive horseman who’s more than a little bloodthirsty, and a trail of secrets and lies. But nothing will be more dangerous than the brilliant and vindictive villain who seeks to bend time itself. Sarah must travel deep into an ancient mystery to save the people she loves.