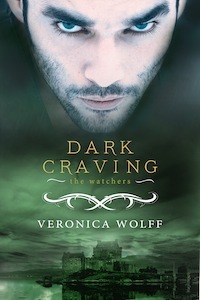 Gikany and Una are still recovering from finishing Dark Craving, the latest in the Watchers series.  Wow!  Since it is a novella, we were curious as to why it was given a full number in the series progression instead of the usual .5 – denoting it as a filler or extra between two novels.  Well, though it is novella length, Dark Craving packs the punch of a full novel with an ending that continues to blow our minds.

The Watchers series follows Drew, the main character and only point of view to date, as she finds herself on a desolate island run by vampires.  She was recruited and is being trained to be a Watcher, if she doesn’t die first.  However, all is not what it seems, and for the first time, we read things through the eyes of Ronan, and we find out a little more backstory and a huge plot twist.  Ronan was the Tracer charged with bringing Drew to the island, but his duties didn’t stop there.  Through his limited time with her, he finds something he thought never to dream of: hope.  It may not seem like much, but when you are a slave to the whims of the ruling vampires, hope is blessedly rare and infinitely precious.

Our only compliant is that Ronan is a Tracer; he grew up knowing about these vampires.  It stands to reason he would know considerably more than Drew about the island and the vampires.  However as we read a portion where Drew confronts Ronan about a discovery she made at the end of the previous novel, it felt a little anticlimactic.  Although Tracers are different from the Trainees, we thought Ronan would know more about what goes on in the Keep, things that Drew had just discovered.  Moreover, we thought he would know more about the status of Emma – whether she is alive, dead or something else.  As we read his point of view of this conversation, we are not rewarded with anything from his private thoughts or subconscious.  This seemed rather cryptic and odd.  As much as Tracers are given much responsibility, they would naturally have seen more and know more.  We understand Ronan keeping Drew in the dark (for her protection) but why not ponder such things to himself?  It just struck a sour chord with us.

If you haven’t tried the Watchers series, it is really a well written Young Adult series.  Please do not start with Dark Craving as it will completely spoil the previous novels.  The journey is amazing and it is worth starting from the beginning since each book builds upon the last.

NOW IT’S TIME TO HEAR RONAN’S SIDE OF THE STORY.

Tracer Ronan has cared for only one person in his life: Charlotte, his sister. With her death, a consuming desire for revenge and destruction ignited in his heart. But when new recruit Annelise Drew arrives on the island, Ronan finds he craves more than revenge. She is a threat to his mission, his sanity, and his heart. Now Ronan will need every ounce of will and strength to avenge his sister and prove where his true allegiance lies.

Tracer Ronan shares his secrets with no one. But will he survive his darkest cravings?