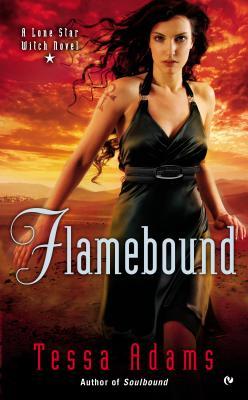 Tessa Adams’ second book in her Lonestar Witch series, Flamebound, had promise for me. I absolutely adored the blurb, but when I actually got to the meat of the book, I was left feeling meh. I was actually kinda geeked about the whole love-triangle thing with Xandra, Declan and another of Declan’s ex-girlfriends, and this trope managed to materialize for a hot minute.

I did receive an ARC of this title, so I’m hoping that several things that made me cringe were taken care of with a last pass prior to publishing. I also wasn’t keen on Xandra’s voice. She seemed whinier than in the previous book. More needy, dependent on Declan. I can see where it would be integral to the plot, to create this co-dependence to strengthen the soulbond. I just wasn’t a fan.

I did absolutely adore several things about this title. The first was the way Ms. Adams crafted the very dimensional conflict in the title. We were treated to conflict at every turn. Seriously. Xandra’s ‘gift’ for finding dead people hauled her to some gristly scenes. A new ‘talent’ for reaching people in trouble – especially a small girl named Shelby – provided some delicious tension between Xandra and Declan. The conflict is layered so well that I didn’t actually know who the bad guy was until very nearly the end. I may have missed a clue earlier on, but it was one of those OHMYGOSHNOFREAKIN’WAY things. Also, I still want Nate to get a HEA.

I thought that the way Xandra and Declan’s relationship evolved was super fast, I thought it was a natural progression and there were natural reactions to different situations. Well, as natural as it can get for witches and all the crazy stuff going on. This was one of the most endearing things about the story for me. It wasn’t all wham-bam, I love you, man. The characters actually grew and evolved.

Ms. Adams did an excellent job writing in first person point-of-view, as well. I think the fact that Xandra and Declan are soulbound helped with understanding Declan better. Excellent plot device. We got to get a bit of insight about Declan through their bond versus outside observation-only.

I have to talk about broody alpha-male Declan. I thought he was positively delicious throughout the story. I thought that in the first book he was a little too wishy-washy. I needed him to take a stand. He definitely did that in Flamebound. I loved the way he was able to give Xandra the time she needed. **delete spoiler*delete spoiler**

Overall, I liked Flamebound. It should definitely be read after reading the first title in the Lonestar Witch series, Soulbound. I do look forward to reading subsequent adventures of Xandra and Declan!

After Xandra’s nasty run in with the Arcadian Council of Witches—where she was almost killed and her boyfriend, Declan, was almost framed for it—her plan is to lay low and figure out why its members would torment the people they are supposed to protect. Declan, temperamental and protective warlock that he is, doesn’t feel so reticent. And when violence erupts again, there’s no stopping him from pursuing revenge…

When a council member is murdered in a fashion that screams dark magic, Declan claims someone else beat him to it. Xandra doesn’t want to believe he could commit such a brutal act, but she knows he has a dark side—one that his former love interest Tsura understands better than she ever will. With Tsura back in town, Xandra doesn’t know whom to trust. And a killer targeting witches and wizards is still at large…

One response to “Review: Flamebound by Tessa Adams”