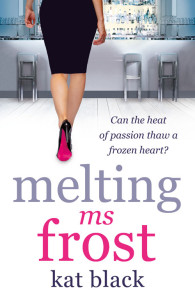 Author Kat Black, based in the United Kingdom—not to be  confused with the children’s author of the same name based in Massachusetts—has recently released Melting Ms. Frost, a contemporary romance with very light domination and submission themes.  Unfortunately, the title of Melting Ms. Frost is basically the entire plot.  The whole book is devoted to the conquest and submission of Annabelle Frost by Aidan Flynn.  That’s not entirely bad.  I don’t mind the occasional book that focuses solely and intently on a single pairing. In this case, however, the weak secondary plots only serve to emphasize the lack of significant growth or change in Annabelle and Aidan.  To me, Annabelle’s eventual letting go isn’t a fundamental change in her personality, but rather giving in to what was already there.  She gets unstuck, but doesn’t really change much.

I didn’t really enjoy the secondary characters, especially Annabelle’s mother.  Her weakness inspires a relentless rigidity and coldness in Annabelle that seems, at times, to be overdone.  She is in her mid-twenties, has a successful career, but no friends of any kind.  It seems to me she would have found someone, even in her college days, with which to vent and share a bottle of wine.  Unfortunately she doesn’t come off as likable and after two-hundred pages of sexual tension with no satisfaction, I was left wondering why Aidan was continuing to bother. There’s a slow burn and then there’s barely glowing embers.  Get on with it already!

But bother he does.  Aidan has an endearing Irish accent and a very clever ability to banter.  I was surprised by how often he was able to trip Annabelle up on her own words of logic and practicality to shock and disturb her well-ordered world.  With his constant pursuit and relentless efforts, we do eventually see a softer, more likable side to Annabelle, but it’s a long time in coming.  I think this book would actually make a better movie so that we could see the facial expressions that turn crude and raunchy dialog into naughty in a good way.  As a reader I felt I had to bring a lot to the story that wasn’t written in.  Thankfully Black was eventually able to convince me that Aidan was using his directness with intent in order to get through Annabelle’s personal fortresses and not just because he is that crass.

I was disappointed that after all Aidan’s effort and Annabelle’s risk to let go, Melting Ms. Frost did not have a strong HEA.  I wasn’t even sure if it was a HFN.  I felt slightly let down.  For me it was a good store that could have been more.  At least two very minor characters would do well with their own books if Black chooses to spin this into a series: billionaire playboy Damien Harcourt and the lead singer of a heavy metal band Balthazar Hunt. Perhaps their strong personalities would make for a book with stronger action and a stronger ending.

Rating: B- Liked It — But I had a few small issues

When Aidan Flynn walks into Cluny’s Restaurant, he can’t take his eyes off his new boss, Annabel Frost. With his heart set on winning her over, Aidan can think of nothing but getting beneath her cold exterior.

Known as one of the toughest women in the business, Annabel is impervious to Aidan’s many charms. His compelling grey gaze and persuasive Irish lilt do anything but captivate her.

But Aidan senses there’s more to Annabel than meets the eye. And he’s not going to stop until he reveals all…

Want a chance to win Melting Ms Frost? See Kat’s interview with the main characters in the Mistletoe Madness event.