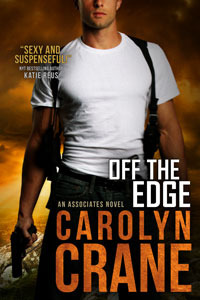 Laney, a sexy American nightclub singer, has been successfully hiding out in Bangkok for the past two years. She helped the FBI put away her abusive, monstrous ex, Rolly. Staying under the protection of some of Bangkok’s underworld figures, the Shinsurin brothers and their sister, Rajini, Laney has managed to keep isolated and safe.

Macmillan (aka Dr. Peter Maxwell) is a linguistics expert who works for the Agency, an independent and underground “world police force.” By listening to crowds and individuals, he is able to pull out who the bad guy is based on speech patterns. Macmillan is emotionless; he plays the game, but it holds no meaning. Yet hearing Laney sing stirs up all sorts of unwanted emotions from a time ten years ago when his parents and fiancé were killed in a train bombing.

Off the Edge was such an enjoyable read! Immediately, I was sucked into the book–craving to experience more and more of the story. Whether it was the spy antics and actions of Macmillan and his fellow Associates, Laney’s desperate attempts to stay free and remain true to herself, or the pair’s open and honest love story, I simply could not put down the book.

Right off the bat, the author does an amazing job helping the reader understand Macmillan. He is a different fellow with a unique job. Yet Ms. Crane manages to create a three dimensional character that I adored. When Macmillan first sees Laney, she is singing at the hotel where he is attempting to find out more about the Jazzman, a clever criminal who is planning to sell a deadly weapon to the highest bidder. Through his deconstruction of Laney’s singing, he is in fact, doing the same of himself. He was breaking apart before the reader, allowing us valuable insight into his inner workings. And then further, when Laney’s music causes Macmillan to recall the details of the accident that killed his loved ones, the description of his memory of pulling out the hand from the bombed train wreckage is phenomenal. The entire scene is laced with heavy emotion, especially disdain that he still recalls the details. Perfectly done.

The connection between Laney and Macmillan is fabulous right from the start. I love that she just opened herself to him, recognizing him as another lost soul. I love that Macmillan is scared by how hard he is falling for her. Although the pair connect, there are a few bumps along the way that make their road to romance more interesting and satisfying.

As wonderful and enjoyable as Laney and Macmillan’s romance is, the action and suspense of Off the Edge is phenomenal! I am not even exaggerating when I tell you that my heart was racing while reading the book. At about the midpoint of the story, secrets are revealed, and the stakes are raised for MacMillan and the Associates. Ms. Crane does a fabulous job spinning a tale that is exciting, yet not too over the top. And while some of the twists probably should have been more obvious, I was so caught up in the storyline that I didn’t even see the signs until I was hit in the face with the truths. It was an intense reading experience that left me white-knuckling my Kindle while desperate to continue reading. And with such an intense storyline, I am happy to report that ending did not disappoint. It is the perfect conclusion without compromising the integrity of the suspenseful storyline.

I also enjoyed meeting some of the other Associates. Even though this is the second book in the series, it can be read without the first story, which was more self-contained. In Off the Edge, we get a good look at a few other key players, whom I hope will be featured in upcoming stories (please!!)

In conclusion, I love Off the Edge and how Ms. Crane pulled me into the world and kept me engrossed. Laney and Macmillan probably shouldn’t be, but they work so great together. The story is a perfect mix of suspenseful action, enjoyable plot, and wonderful romance.

SHE MAY BE HIS WORST ENEMY…
For deadly secret agent Peter Macmillan, language is a weapon—one he uses to hunt criminals, destroy plots, and charm enemies. Seducing information out of a beautiful singer in Bangkok hotel should be easy…except this particular singer has the power to destroy his cool façade, and with it, his last defense against a dark past.

HE MAY BE HER ONLY HOPE…
He tricked her. He helped himself to her body and her secrets. He has enemies everywhere. Laney Lancaster should hate Peter, but when she discovers him shirtless, sweaty, and chained up in the hotel’s dungeon, all she can think about is freeing him. Because she knows what it’s like to be trapped and alone. And she could use a dangerous friend.

Purchase Info:
Off the Edge (The Associates #2)

Reviews in the Series:
Against the Dark by Carolyn Crane (The Associates #1)

5 responses to “Review: Off the Edge by Carolyn Crane”