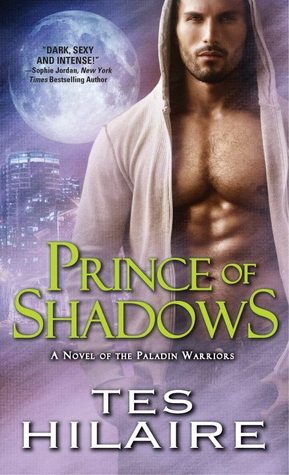 I really like Tes Hilaire’s style of writing. She’s consistent, and I know what I’m in for when I pick up one of her books. The Paladin Warriors series is something I look forward to yearly, and I can’t WAIT to read the next installment – pleasepleaseplease tell me Bennett & Annie are the next book! There. Now that the whining and begging are out of the way… let’s hit the good stuff!

First, I want to talk about Camp Half Blood. Well, not really. That’s a different series, but it kinda works! See, the humans with ‘gifts’ were all congregating under Jacob’s leadership in an old school. They’re training to fight the ‘good fight’ and be victorious over evil. Yay for exterminating baddies!  Of all the people hangin’ out there, Annie was the most important, in my opinion. She’s what they termed a ‘null’ – she could nullify the powers of anyone, including the Paladin. Pretty cool trick, huh? A lot of the story took place here, and around this pretty militant gathering. I liked. It was structured, but not insanely so. Annie also has eyes for Bennett, one of the Paladin. Ooh la la!

We were introduced to Gabby and Valin, our main couple, in previous titles. I was ecstatic to read their story. The chemistry between these characters is pretty stellar. I was also glad to hear a bit about Logan – even though he’s not doing too well *sadface*. Seeing Roland and Karissa was awesome as well…and speaking of them, they’re part of a pretty cool plot twist! I am standing mute on the bad guys, however. I don’t want to be spoiler-y. Ms. Hilaire did a great job developing the nefarious plot, and I gotta respect that. Y’all are going to have to pick up Prince of Shadows and say a whole lotta ‘oh, HECK no!’ just like I did! Even though this is the third book of the Paladin Warriors series, it could probably stand-alone. Although I wouldn’t advise it. You’ll most definitely be intrigued enough to read the next title, and heck, probably want to go pick up the first two titles, as well.

Alpha male fan? Valin’s your boy. When I read PNR, I really like my males alpha. Practically beating their chests with overloads of testosterone. When one of these drool-worthy hotties finds his other half, the one that makes him feel complete, I love watching the transformation, and Valin’s road to happiness was no exception. When the story opens, Valin is searching for something. Or rather, someONE. But, it was business-as-usual for a Paladin. Find the merkers, kill the merkers, rinse, repeat. As the plot progressed, he knew that Gabby was HIS. That whole ‘Me Tarzan, you Jane’ thing. Giving the stink-eye to any guy that showed the slightest interest. You get the picture. He had to win her over though, and that was one road filled with pot-holes (think Michigan dirt road in the spring). What was the most intriguing about Valin, though, was his ‘gift’. He was able to disappear into the shadows – an unusual talent for one born of light. The little catch with Valin’s talent was that he couldn’t take any possessions with him. No clothes. No weapons. No. Nothing. One of my favorite descriptions was of Valin and his irreverent version of Hide and Go Seek:

…Valin had made a game of wagging his naked jangles in the universal taunt of the ages…then hiding and ghosting in time to avoid becoming a crispy critter. At least mostly un-crispy. More like the original recipe perhaps.

Valin’s naked jangles make several appearances throughout the title. I’m not going to apologize for my glee.

Gabby is a unique one. Her mom’s a succubus, and we’re not quite sure who’s her daddy. For a while, anyway. Poor girl was turned into a vampire, and her diet is less than optimal. She’s got physical evidence of her poor diet – much like that friend that eats only junk food. So much so, that Valin barely recognizes her when he sees her the first time. The awesome thing about Gabby is that even though she’s been dealt a crappy hand in her (after)life, she perseveres. She keeps trying to do the right thing, even though it’s really not in her best interests. Some might say she’s a bit of an adrenaline junkie. I really like how spunky she is – sassy, even though she’s completely messed up in the head. I should also add that even though I like Gabby, she’s got the lowest self-esteem in the world. I felt sorry for her most of the way through the book. Makes me sad to see someone feel that way about themselves. I was a bit giddy when she hooked-up with Valin, though. I … well, I suppose I shouldn’t spoil the epic hotness of their consummation, huh? (but seriously, me likey!)

Tes Hilaire’s Warrior Paladin series is definitely on my auto-read list.  Prince of Shadows definitely didn’t disappoint. Fans of alpha males and spunky heroines will adore Valin and Gabby. Can’t wait to read the next title in the series!

Valin has never quite fit in with the rest of the Paladin warriors. His power to manipulate shadow has always put him at odds with their purpose of using heavenly Light to eradicate evil. His warrior brothers have no idea how close he is to being lost to his dark nature.

But Maybe He Was Never All That Light to Begin With…

When Valin meets the vampire Gabriella, she awakens within him something he thought long buried. But as he watched Gabriella’s need for vengeance to drag her down into the same dark hell that he’s living, he knows his only chance at redemption is bringing her out of the dark…

One response to “Review: Prince of Shadows by Tes Hilaire”