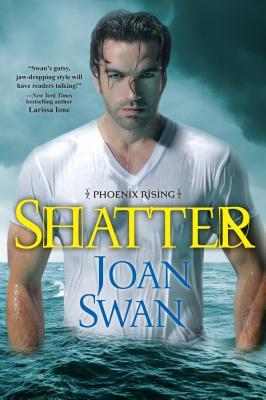 I have enjoyed Joan Swan’s Phoenix Rising series since the first book, Fever. The series is a sublime mix of action/adventure and strong, palatable sex appeal. Each book chronicles the adventures of a close-knit group of friends who is being hunted by a power-hungry US senator. The long-awaited conclusion of their trials culminates in Shatter. Due to this fact, and that there is a complex back story, I do not suggest a new-to-the-series reader start with Shatter; however, if one really wanted, it could be read as a stand alone.

The story opens just after the conclusion of the third book, Rush, when Mitch Foster discovered that the one woman he ever loved (who left him for her Russian husband seven years ago), was intimately involved with his nemesis, Senator Schaeffer, and the project that ruined his friends’ lives all those years ago. Now that he knows their past was a lie, he tracks down Halina to recover any information she has that will help him put away Schaeffer for good.

I enjoyed the opening of the story. I laughed as Mitch spied on Halina and Halina spied on Mitch (not knowing who he was). There was some mistaken identity humor that made me smile. Much of the early part of the story is told from Mitch’s POV, so we know she is the only woman he’s ever loved and that her lies shaped the lonely man he is today. Mitch’s hurt and the feelings of betrayal are well documented, allowing me to feel sympathetic towards his situation.

However, I did not feel the same of Halina’s plight. Although she left Mitch for his own protection, I honestly could not connect with her reasoning. She really did a number on Mitch, and although she may have “had the best intentions,” we all know the road to hell is paved with good intentions. Her actions were near unforgivable, and I found little sympathy for her. For me, her cold-hearted behavior damaged the relationship and made it difficult for me to connect with the pair as a romantic couple. While they did share some steamy sexual moments, I felt that their actions and behavior overshadowed the romance. In addition, there is a possible pregnancy subplot that didn’t sit well with me.

The story is also a bit overwhelming to read at times. With so many characters and voices all together, it is easy to get lost. Unfortunately, this caused a feeling of discontinuity within a few key action scenes. I felt a disconnect because I could not envision the scenes… The descriptions are good, it’s just that there is too much going on.

With that said, the action and suspense of the story is par for the course for the series. And, I enjoyed the side story with Owen, a reoccurring supporting character who is determined to find out the truth and bring down Schaeffer in a legal way. He finally discovered that Jocelyn had set him up to take the blame for everything. This frees up Owen to fall for a former comrade and close friend… the FBI agent investigating Schaeffer, Sofia. It is a pleasant diversion away from the intensity of the main story.

Overall, Shatter is an entertaining story, and I appreciate the lengths taken to put closure on the team’s long-running issues. However, I was a bit disappointed with the book. I found that I didn’t feel a connection to Mitch and Halina. While Mitch’s desire and even love for Halina was palpable, her coldness and constant lying made it hard for me to believe her love. In addition, key scenes tended to be too chaotic and hard to follow. Regardless of my issues, I still enjoyed the story and it is a must read for fans of this fantastic series.

For seven years, Halina Beloi has been in hiding. But she’s never forgotten Mitch Foster, the long, lean man she had to leave behind. Until, that is, Mitch shows up with a list of questions and a 9mm in his hand.

All Mitch knows is that Halina broke his heart and disappeared. But new information has surfaced implicating her as a player in the deadliest game of Mitch’s life. This time, he’s not letting go without answers. Now terror, danger and heat will fuse them together or shatter the future…