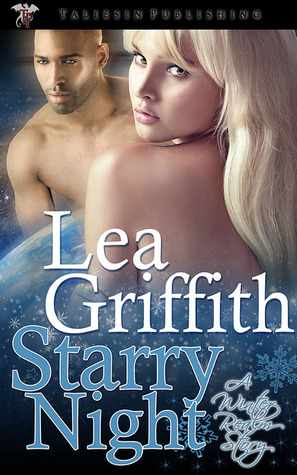 When the Unseelie King, Iomlan, discovered his favorite lover, Inuit Queen Cikuq, slept with Jack Frost and has been passing off their love child as Iomlan’s, he banished the girl to another planet. Talini has spent 300 years alone on an ice planet, with only two reminders of home, her mahogany bed and her pet fox, Tiktok.

Kian was hired by Jack Frost to find his long-lost daughter. Kian and a small crew have been searching for five long years to find Tal. During this time, Kian has become a bit obsessed with Tal and imagines a little more than just a rescue when he finally finds her.

I enjoyed Kian and Tal together. The pair’s childish verbal sparring is cute and funny. Once the pair gets past the silliness, and Kian is honest with his heart, the pair’s romance becomes touching and their sex is hot. There is a side-story about a soul-angel, which I think is a lot like “soul mates;” however, it was a little strange and confusing.

Rescue and such aside, the ending is sweet. Everything is tied up in a bow like a lovely Christmas package. I enjoyed Kian and Tal’s chemistry, even with the silliness.

Three hundred years spent on a deserted planet in the Serens constellation has not broken Talini. As a daughter of the Fae, Jack Frost, she is made of all things ice and snow. But then she meets a man who warms her as no one ever has and she is set adrift with desire.

Kian has searched for a long time and he’s come to the end of the line. Jack Frost has agreed to pay him a lot of money to find his daughter and he’s determined to see his goal met. Then he meets a woman who makes him shiver and shake, thawing his cold heart and making him believe in things that are impossible.

Together they will set on a journey that will lead them down a perilous road. Stuck on an uninhabited planet, they will forge a bond as fragile as a snowflake but as strong as forever. Together they will prove that love can bloom amidst the frost.