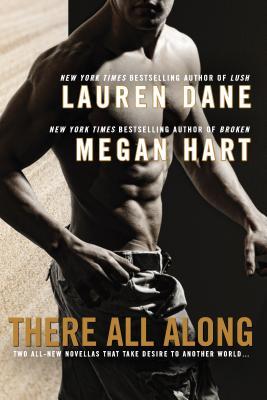 There All Along is a two-story anthology based on finding love that was “there all along.” Both stories are set in alternative/futuristic worlds; however the first tale, “Land’s End” by Lauren Dane, reads more like western frontier than science fiction. On the other hand, “By the Sea of Sand” by Megan Hart has a distinct sci-fi romance edge. Both stories are entertaining and enjoyable. I’ve never read either author, and this stand-alone anthology has whet my appetite for more from both writers.

The Land’s End Highway is a dangerous route riddled with vicious brigands, but it is the only way to travel from Garrison to Garrison. The only people on the road, other than the occasional private citizen, are the law men employed to keep the peace and help transport shipments and supplies from town to town. Loyal is one such law man.

Verity is a widowed shop keeper in Silver Cliffs who has caught the eye of Loyal. When the story begins, the pair already share a mutual attraction, but nothing has ever happened because Loyal knows Verity is someone much more than a passing need and good time.

I am a sucker for this type of story – mutual, yet unfulfilled attraction that builds until BAM, they give into their desires. The opening scenes, including one featuring Verity alone in the bathtub, exude incredible sexual tension. I absolutely  love how much they want each other, but don’t give in. Each scene progresses until the flame is smoldering and the passion between the pair ignites. I throughly enjoyed every scene this pair had together.

I also admire that both characters are strong, but not pig-headed or stubborn. After Verity presses Loyal into their first kiss and he walks away, she’s not saddened or discouraged. Instead she knows it’s only the first step to winning over her man. At moments my heart did break for the both Verity and Loyal. Ms. Dane expertly wrote the characters so that the reader is able to experience both individual’s pain and frustration over their situation.

Meanwhile, adding to the tension is the likeliness of danger from the brigands. The juxtaposition of the impending raid with Verity and Loyal’s mutual desire adds passion to the story. Knowing that their brief time together may be all they get, and that it will never be enough; it’s powerful. I adore Loyal’s open and blunt talk of what he wants, how he needs Verity. And I appreciate that the skirmishes and brigands were secondary to the true conflict, which was how to make their relationship work.

Summary: Verity and Loyal have a draw to one another that pulled me in and made me smile. Lovely romance.  Rating: A-

“By the Sea of Sand” by Megan Hart

Teila and her young son Stephin live by the Sea of Sand maintaining a lighthouse  which doubles as a sanctuary for injured soldiers to convalesce from mental anguish. Teila lost her own husband to the war between the Sheirran Defense Forces and the Wirtheran hive, yet she spends her days and nights caring for the soldiers her father-in-law (who is the highest ranking commander in the SDF) brings her. However, her latest patient may put her over the edge: a high-ranking officer with amnesia, violent nightmares, with the high possibility that his mind has been corrupted by the Wirtheran hive.

As soon as he begins to wake, Jodah craves Teila – taking her as if she were just a dream; also fearful it is only a method of mind-control the Witheran use to break their prisoners. However, Jodah learns soon enough that he is finally free, and I enjoyed watching him slowly recover and get his feet back under him. Even with the amnesia, he is able to become a functioning member of the lighthouse community. There is also a “I did NOT see this coming” type of twist that occurs early on, changing the feel and intensity of the story and impacting how Teila assists Jodah on his path to recovery. This created some intense and frustrating moments, leaving me almost mournful over the situation. The pair have good chemistry, but it is clouded because of Jodah’s lack of memories.

The story also touches on the on-going battles. Having just read Ender’s Game recently, I felt there were a few echoes of that story. The story addresses some of the political ramifications of the war and what is happening to its soldiers. This aspect adds to the overall melancholy mood of the tale. Watching the degradation of some of the lighthouse guests brought me down and left me wondering if a romance between Jodah and Teila could be lasting.

Summary: Jodah and Teila create a compelling story, yet the underlying sadness of the story and the message of future despair left me uneasy.  Rating: B

“Land’s End” by Lauren DaneThe Land’s End highway is one of the most dangerous places in the universe. The constant peril of brigands keeps Verity Coleman stuck in Silver Cliffs, dreaming of the open road—and of Loyal Alsbaugh, the tall and silent highway patrolman. When her town is attacked, Verity has a chance to win over Loyal’s muted heart. But will his wounded past make him leave her along the road, or can she convince him to take her along?

“By the Sea of Sand” by Megan HartCaptain Kason Reed was willing to give his life to the Sheirran Defense Forces, but now he can’t remember anything but bits and pieces of the war. When his sexual attraction to his caregiver, Teila, causes him to make advances toward her, she becomes the aggressor, urging him with her body to explore the memories of his past—memories that all seem to draw him back to Teila

Purchase Info:
There All Along by Lauren Dane & Megan Hart

2 responses to “Review: There All Along by Lauren Dane & Megan Hart”