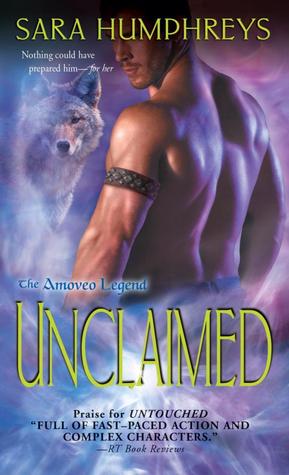 Unclaimed is the fifth book in the Amoveo series.  Although we felt it was a bit transitional, we liked this latest Amoveo novel.

Tatiana has been purposely avoiding her both mate and the Amoveo.  Even though her sister is happily mated, she is still not sold on finding a mate.  However fate has a sense of humor and Tatiana finds herself doing a favor for the Amoveo prince by going to his compound to discover the cause of sickness among his wife’s prized horses.  Upon her arrival she makes the shocking discovery of meeting her mate, Dominic.

Dominic isn’t worried about finding his mate. He would like to, sure, but his first and foremost duty is protecting the Prince.  Everything else comes second.  He is even at peace with knowing if he doesn’t find his mate, he will only continue to be a Guardian until he is physically unable to do so.  However, once he meets Tatiana – well, let the ping-pong games commence.

Gikany and Una found the hot-cold, yes-no, a little annoying.  Tatiana thinks that by becoming a mate, she has to give up her life.  After meeting Dominic, it is easy to see how she came to that conclusion.  However, if the two of them had actually had a real conversation instead of just verbal sparring, they might have had an easier journey.  Not that they wouldn’t have had strife and obstacles, but that the connection would have been stronger between them.  Their journey did not keep us glued to the novel as much as the mystery of who was harming the horses and what was the status of the rebels.  However, the final confrontation between the Loyalists and the Purists was a tad… lackluster.  When we finally discover the state of the Purists, it was a bit anti-climatic.  What was surprising was the confession from the Purist’s leader’s daughter, Savannah.  This and the reactions from those present were staggering.  We hope that the next novel will concern her and her mate.  We were absolutely struck by her when we met her in the previous novel and we cannot wait to see more of her.

Although the story of Tatiana and Dominic was not the focal point for us, we did enjoy their journey.  However, we are intrigued on what holds in the future of the Amoveo’s, will their ancient enemies return?  Yet, our biggest question is: what of Savannah and her future?

Rating: B- Liked it – but had a few small issues

Tatiana Winters, from the Timber Wolf clan, is a spirited veterinarian who wants nothing to do with the Amoveo—the ancient race of shape-shifters who live secretly among humans. But when the Amoveo Prince’s horses fall sick, Tatiana reluctantly heads to his ranch to help.

When she meets Dominic Trejada, a handsome warrior from the Tiger Clan, they instantly clash and sparks ignite. But when danger stalks near, they will have to find a way to trust each other if they want to stay alive.

One response to “Review: Unclaimed by Sara Humphreys”