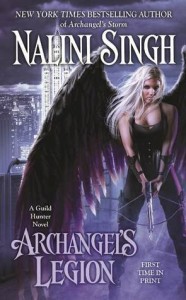 Still not sure she was happy about the whole river-of-blood/strange-influx-of power situation, she landed on a rooftop not far from the river’s edge just as the snow stopped falling, the sun’s rays refracted off a city covered in a fine, feather light blanket of white.  The rooftop had a direct line of sight to the river, and she could see swarms of people on the piers, gesticulating wildly as they gathered around camera phones that had no doubt caught the weirdness.

Blue feathers with glittering silver filaments filled her vision a second later, followed by the wings of an angel with eyes of gold abundant in their mischief.  “Come on, Ellie.”  He threw her a baseball mitt, his own left hand already gloved, a ball in his right.  “Let’s go play catch above the Hudson.”

“You ever seen angels playing catch?”  A raised eyebrow.  “Exactly.”

Figuring what the hell, she followed him to the river where they were joined by three other angels from the Tower, all of who grinned and saluted her before calling out to Illium to stop delaying and prepare to get his ass kicked. Illium shot back a colorful insult… and then they played catch, angel-style.

“Holy hell!” She dived and rose as the ball went in every possible direction, the players attempting to beat one another to it and/or stop it from hitting the water.  Elena wasn’t anywhere near as fast as Illium or the others, but she held her own by using her brain to calculate angles, even making a couple of surprise intercepts that put her on the points table.

Less than two minutes after they began, the people on the bank stopped staring at the Hudson and started cheering for their favorite player.  Factions formed, an enterprising group finding a blue scarf to wave for Illium.  The idea quickly picked up steam, and soon there were five different scarves for the five players, Elena’s a distinctive hunter gold.

Had to be someone from the Guild down there, she thought with a grin.

Elena wasn’t the least surprised when a media chopper appeared in the sky, a harness-bound cameraman hanging out the side, though the crew stayed at a respectful distance.  Funny how they’d been doing that since Illium made it clear that in a chopper-versus-angel fight, the chopper would come out worse.  Much worse.

“Got it!”  Managing to catch a throw that would’ve otherwise hit the center of the cheering crowd, she fired it high and to the left… where it was intercepted by an angel with eyes of splintered green and wings of icy sunlight.  When he rocketed the ball toward Illium using his left hand, the blue-winged angel tumbled head over feet from the force of the powerful missile before thrusting up his hand with a grin, ball firmly in his grasp.

Elena and the other three players exchanged looks and silently retired from the game, their chests heaving a they took a seat on the edge of the nearest roof, happy to watch Aodhan and Illium showcase their extraordinary skills in the air.  “Have you seen them do anything like this before?” she said to the angel beside her, an older squadron commander she’d never seen laugh before today.

“Not for two centuries.”