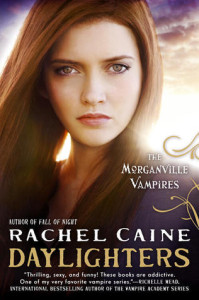 “It’s clear you don’t understand the slightest thing about what is happening in Morganville,” Amelie said.  “So I will forgive you for not comprehending how much danger you put Michael in by separating him from my protection.”  She nodded slightly, and on the other side of the atrium, Oliver stepped up.  He was holding Michael by the arm.  Michael broke free, and for just a heartbeat Claire saw him clearly in the dim light:  a shock of golden hair wild around his face, clear blue eyes fixed on Eve.  Of all of them, he looked the least like a vampire, except for the pallor of his skin.  He looked like a Renaissance angel come to life, if angels wore jeans and witty T-shirts.  He was wearing something black around his throat, and for a second Claire thought it was one of Eve’s chokers, the dog-collar type, though that would be a strange thing for him to put on.  She could barely see it, and then he was a blur, heading at vamp speed across the tiles.

Hannah pressed a button on the box on her belt, and Michael stopped.  No, not just stopped – he broke stride, stumbled, and fell to his knees, shaking.  “Slowly,” Hannah said.  “Don’t make me take it up to the next level, Michael.  Move slowly.”

“Yes,” Amelie said from the shadows.  “Pray do as she says, Michael.”

Eve, after a white-hot glare at Hannah, threw herself out into the open space and down next to Michael.  “What did you do to him?” she demanded.  “He’s hurt!  Michael, baby, are you okay?  Michael!”

“He’s fine,” Hannah said, and took her finger off the button.  “No permanent damage, I promise.  But I have to make sure everybody obeys the rules.  It’s the only way this works.”

The vampires hadn’t moved, but there was a new feeling in the air, Claire thought.  A kind of tension that was reinforced by what sounded almost like a low whisper of sound.

“I’m fine,” Michael said.  He sounded shaken, but he wrapped his arms around Eve and held on tight.  “God, there you are.  All in one piece.  I was so worried.”

“I didn’t know what happened to you.”  He raised his hands to cup her face, and brushed her black hair back.  It was growing longer again, and she hadn’t braided it, so it fell in a sleek curtain.  “I was so scared they’d – they’d done something to you.  Not hurt?”

“Just my feelings,” Eve said.  “Seeing as how our old friend there stuck a knife between our collective shoulder blades.”  She followed her statement up with a rude gesture, to which Hannah didn’t bother to react.  “Honey-” She reached out toward the collar around his neck.  He captured her hands in his and held on when she tried to pull away.  “Honey, what is that thing around your neck?”

“We have to maintain order,” Hannah replied.  “It’s the least violent way we could come up with to do it.  They need to stay inside this building for their own protection, and we need to have order for the safety of my officers.”

Amelie had the same collar on, Claire realized.  So did Oliver, standing with his graying hair loose and wild around his shoulders.

And where was Myrnin?  Her heart skipped a beat and then sped up.  She didn’t see him anywhere.  Surely he’d be here if he was able to, which meant that he wasn’t able to make an appearance.  That something had gone wrong with him.

Michael had steadied by now, and he kissed Eve’s hands and then leaned forward to press his lips to hers – a soft, gentle sort of kiss that made her let out a cry when it was over, and bury her face in the crook of his neck.  He held on to her, but his blue eyes remained fixed on Hannah.  Hard to read his expression.  Claire had never seen him look quite that closed off.  “Eve can’t stay here,” he said.  “You can’t let her stay here with me, you know that.  Not even if she wants to.”

“I wouldn’t,” Hannah said.  “I know how dangerous it would be, even if she refuses to admit it.”

“Are you crazy?” Eve said.  Her voice was muffled against his shoulder, but Claire still heard it clearly.  “No, I’m not going anywhere, and I’m not letting you stay trapped in here without me.  They don’t get to put you in some kind of – vampire petting zoo.  You’re coming home where you belong.  With us.  With me.”

“He can’t,” Amelie said.  “If he leaves this place, he will be killed.  Not by us, of course.  By those who are our… protectors.”  The irony of that wasn’t lost on her, Claire thought, noticing the twist of her lips.  The taste of it must have been bitter.

“Is that true?” Shane turned to look at Hannah, but she continued to do a middle-distance stare.  “Hey.  Talking to you, lady!”

“I heard you,” she said.  “She’s right that it isn’t safe for vampires outside of this enclave.”

Claire heard the outrage in her own voice, even “Enclave?” though she tried to hold it back.  “I don’t care what kind of cool name you want to give it to make yourself feel better.  It’s a prison camp.”

“They’re here for their own protection.”

“Bullshit!” she spat back, and Shane put his hand on her shoulder.  It surprised her enough to stop her from uttering the rest of what she’d been about to say, which probably wouldn’t have been quite so nice.

“Maybe we need to just think a little more,” he said.  “I mean, having vampires obeying the rules… what’s so wrong with that?  They damn sure don’t obey any unless they’re scared of something.  Not even the rules they make themselves.  Right Amelie?”

“You’re being foolish,” Amelie said.  “And disloyal to your friend.”

“Hey, lady, I’ve been bending over backward for years around here not to judge you bloodsuckers, no matter what kind of horrible things you did.  Give me a break.  And you know what?  For a change, give me a little respect, too.  Because I deserve that.  We all do.  All us poor, stupid, humans.”  Shane wasn’t entirely wrong, Claire had to admit, though he also wasn’t usually this blunt about it.  But then, the vampires usually wouldn’t have let him say these things without reprisal.  “Maybe we should all show a little good judgment and agree that vamps aren’t the safest thing in the world to have lurking around in your neighborhood -”

“Thanks for being on my side, bro,” Michael said.

“I’m not saying this is the right way to do it.  But maybe it’s the right idea, keeping vamps and humans apart.”  Shane shivered a little, as if he were cold, but Claire realized that his face was flushed and he was sweating.  It wasn’t too hot in here – probably airconditioned for the comfort of the guards.  He really didn’t look good, Claire thought, and she took his hand.  It felt hot – feverish.  Was he sick?  She could feel the tremors going through him, over and over.

“Shane?  What’s wrong?  You’re burning up!”  Claire put the back of her hand against his forehead – or tried to.,  He knocked her arm away.  It shocked her, and it surprised him, too.  She saw the instant regret in his eyes, but when he tried to talk, he gagged.