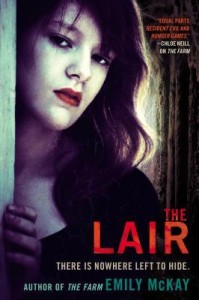 “This is where you seek sanctuary?  In a freezer in Wal-Mart? You can’t be serious.”

“Airtight, reinforced steel doors–” She paused to grab the handle and swing the door open.  “That open from the outside.”

He smirked.  “Yeah.  Handles on the inside, too.  Besides, I haven’t met a Tick yet who actually thinks to try that.  They lose interest in what they can’t see or smell.  They’re animals.  Once you disappear into that box, you no longer exist to them.”

She took a step closer to the door.  A scent that was one part rotten meat and two parts mold assaulted her nose.  “Holy crap, it stinks in there.”

“Exactly.”  He nudged the door open with the nose of his rifle and stepped inside.  He panned the beam of light from his flashlight around the interior of the room.

He didn’t seem to notice the stench.  Either he was used to doing this or his sense of smell had been obliterated already, because her nostrils were twitching in rebellion and she hadn’t even walked inside.

A moment later, he walked out, his rifle slung up against his shoulder, his Maglite dangling from his hand.  “Looks clear.”

“Here’s the drill,” he said, ignoring her sarcasm.  “You stay here and clear out whatever’s stinking up the inside of the box. If it still smells, leave it near the outside door.  It’ll cover our scent.  Once we lock ourselves in, we’ll be airtight.  Any Ticks who come out after dusk will probably follow our scent to the store, but they won’t be able to find us or get in.  They’ll lose interest before dawn and move on to other prey.  Easy as pie.”

“This is your big plan?  Lock ourselves into an airtight room for the night?  Doesn’t that seem a bit … stifling?”  Then it hit her.  That’s what the plants are for, isn’t it?”

“Bingo.  Carter was right: you are smart.”

“Smart enough to question the sanity of this plan.  How do you know you have enough to generate enough oxygen for the three of us?”

He shrugged.  “I don’t.  But I’ve been doing this for six months now, sometimes with more than five people.  We haven’t died yet.”

“Hey, if you want to be the one who sits outside the fridge and waits for the Ticks to come, that’s fine by my.”

“I just don’t want to be the one who dies in the middle of the night from oxygen deprivation.”

He ignored her.  “I’ll go get McKenna and start hauling stuff in.  You clear out the fridge.”

She glared at Ely’s back as he stalked off through the store.  She didn’t bother to remind him that she was wounded and she couldn’t really lift any of those boxes.  She would kick the boxes out if she had to.  He’d obviously given her the worst of the jobs.  No big surprise there.  Ely was so not her favorite person.

She set her bow and quiver down beside the open door and stepped into the room.  Even breathing through her mouth, she could feel the mold spores invading her body.

She worked quickly, wanting to get all the stinky stuff out before McKenna came back.  Moving the meat and other rotted food was a nightmare of squishy disgustingness.  By the time she’d moved most of the big stuff, McKenna and Ely were back.  He had most of the bags.  She was carrying a potted plant.  She smiled wanly but even that seemed forced as she rubbed her palm along the bottom of her belly.

Lily found a ratty desk chair from the staff room and moved it in for McKenna to sit on.  It was the kind of thing no one would have bothered stealing when they were looting the store.

McKenna sat down awkwardly, still rubbing the side of her belly.

“It still stinks in here, but Ely says we’ll be safe.”

“It’s fine.”  The corners of McKenna’s mouth twitched, like she was trying to stifle her gag reflex.

Ely had disappeared back out to the car for another load of plants.  Lily set the first one close to McKenna’s chair, figuring she needed the fresh air more.  Then she went out into the back room to look for anything else useful.  By the time they were ready to lock themselves in, the air was better.  She’d found some tattered blankets for McKenna to curl up on.  The girl must have ben exhausted, because once she stretched out, she fell asleep almost immediately.  Lily situated herself on the opposite wall, her bow at her side.  She wouldn’t sleep, so she didn’t bother to lie down.

Ely pulled off his jacket, rolled it up, and stretched out with his hands linked over his belly and his head on the jacket.  A moment later, he was asleep.

She’d almost drifted off herself, when she heard a noise from outside: a long, slow scratch, like something running a claws over the floor.

The sound was distant and muffled, coming from somewhere either behind the back of the store or maybe out in the store itself.  Her breath caught in her chest. For a long moment, she heard only the quiet snuffling of McKenna’s snores.  Then came a sound that chilled her to the bone — a sound she hadn’t heard since the night her sister had been lost to her forever.  The lose, keening howl of a Tick.

One of them had caught their scent.  Probably outside in the store.  He — or she — had called the others.  They traveled in packs, like wolves.  They would tear the store apart looking for them.  If Ely was right, they wouldn’t find them.

In the absolute dark, Lily reached a hand out to the spot by her side where she’d put her bow.

Her heart about jumped out of her chest.

She hadn’t even realized he was awake.  Past her thundering heart, she managed to ask, “What?”

“Don’t even bother with the bow and arrow.”  His voice was soft without being a whisper.

“So, what?  I shouldn’t even bother to fight?  If one of those things breaks in here –”

“None of them will.  But if they do, we should have plenty of warning.  A Tick couldn’t get through quietly.  It would make a ton of noise.  We’ll hear.”

“Well, that makes me feel so much better.”

“Anything comes through that door and I’ll have the Maglite on it as soon as the door opens.  The light will blind it.  That should buy us twenty, thirty seconds to blow it away.”

The brutal blood thirst in his voice should have terrified her.  Instead she found it oddly reassuring.  He had a plan.  That was a good thing.

So she dropped her hand back  into her lap, content knowing that her bow was nearby, if not actually in her hand, and that Ely had her back, at least for the night.