Hey everyone!!! Thanks to That’s What I’m Talking About for having me back here for my Dirty Deeds blog tour 🙂 Dirty Deeds is the first in this spin-off series of Hell or High Water. Dirty Deeds focuses on Cillian and Mal, two characters who’ve been in both Hell or High Water books 1 & 2 (Catch a Ghost and Long Time Gone.) Dirty Deeds # 1 captures a very specific moment in time for the Cillian (the spook) and Mal (the former SEAL in exile).

I love writing to music, and I like to compile soundtracks for my books. I put the songs and some of the lyrics that are particularly important to the book at hand on my website when the book’s published. So this is the first reveal of the Dirty Deeds soundtrack. If you’ve read the books already, I think you’ll understand the lyrics that called to me…and if you haven’t read it yet, it’ll give you a taste of what’s to come.

I ran outta juice
They’re gonna put me in a cell, if I can’t go to heaven
Will they let me go to hell
Crazy
Stone cold crazy, you know

***
Another One Bites The Dust (Queen)

There are plenty of ways you can hurt a man
And bring him to the ground
You can beat him
You can cheat him
You can treat him bad and leave him
When he’s down
But I’m ready, yes I’m ready for you
I’m standing on my own two feet

Cause there’s a monster living under my bed
Whispering in my ear
There’s an angel, with a hand on my head
She say I’ve got nothing to fear

***
Insane in the Brain (Cypress Hill)

Hide from the red light beam
Now do you believe in the unseen
Look, but don’t make your eyes strain

***
Fooled Around and Fell in Love (Elvin Bishop)

Beggin’ on my knees baby, won’t you please?
Run your fingers through my hair

My, my, my whiskey and rye
Don’t it make you feel so fine
Right or wrong don’t it turn you on
Can’t you see we’re wastin’ time, yeah?

Enter to win a gift card from Amazon by filling out the Rafflecopter form: 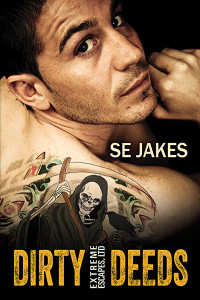 Two seasoned operatives finally meet their match: each other.

Cillian works for the mysterious Special Branch 20: an organization that runs black ops commissioned by the British government. His specialty is deep undercover assignments with virtually no support. He’s been alone for so long that he no longer knows anything else.

Mal’s also used to being alone. Wanted in several states and even more countries, he’s not allowed in the vicinity of any of his former Navy SEAL teammates. And his current assignment is to track Cillian in order to discover the spook’s endgame. Except he’s no longer sure which one of them is getting played.

Cillian isn’t about to let the mission that’s consumed him for the past several years crumble because an outsider is poking around where he doesn’t belong. But Mal forces his way through Cillian’s defenses—and into his heart—exposing a devastating betrayal that could destroy them both.

SE Jakes writes m/m romance. She believes in happy endings and fighting for what you want in both fiction and real life.
She lives in New York with her family, and most days, she can be found happily writing (in bed). No really…
Connect with SE: