Beauty and the Beast has always been one of my favorite stories.

The huffy, overbearing beast really is a teddy bear at heart. He just needs the love of a good woman to bring him out of the shadows.

One of the best Beauty and the Beast romances I’ve read was “A Rose in Winter” by Kathleen Woodiwiss. I remember hiding the book inside my high school text books so I could read in class—which I’m sure my teachers realized I was doing—and reading through lunch because I couldn’t put it down.

My friends and I passed that book around for months and somewhere in my attic, I have that same, dog-eared copy because I could never bear to get rid of it.

When I was asked to join the A VERY NAUGHTY XMAS anthology with Cherrie Lynn, Olivia Cunning, Cari Quinn and Raven Morris, I had to come up with a story fast. I chose to do the tried-and-true Beauty and the Beast but with a twist.

This Beast has a best friend who’s stuck by him through thick and thin. A best friend who has scars that aren’t as visible as the Beast’s but still cut deep.

Erik and Keegan have been floundering for three years since the explosion that left Erik disfigured. Erik refuses to come out of the shadows. Keegan worries that he might never. Then Erik sees Jules and Keegan sees a spark of the old Erik.

Then Erik gets an idea for a very indecent proposition. One that involves money that will save Jules and her mom from years of crushing debt. And will land Jules squarely between them.

Where, Jules will discover, it’s not a bad place to be. 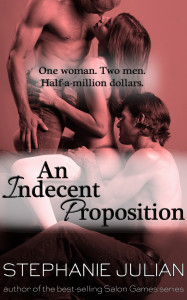 One woman. Two men. Half a million dollars. One night…

One night. That’s all Erik and Keegan want with Julianne. And they’ve come up with the perfect plan: Offer Julianne a half-million dollars. Julianne is in debt up to her eyeballs due to her mother’s illness. Five-hundred-thousand dollars would pay off her bills and give her a start on a new life. All she needs to do is have sex with a man she’s never met.

An explosion left Erik with scars, physical and psychological. Work is his only refuge. Until he sees Julianne through a surveillance camera. And he discovers a desire he thought had been burned out of him.

Keegan has watched his best friend retreat from the world for too long. If his desire for Julianne brings him back to life, Keegan will bring her to him, whatever it takes.

Julianne is young, adventurous and not afraid to take what she wants. And she wants these men.

But what happens when the night is over?

Well, that’s the best part of the story…

In January 2013, the Salon Games series began with BY PRIVATE INVITATION and continued with NO RESERVATIONS in September 2013.

Stephanie is happily married to a Springsteen fanatic and the mother of two sons who love her even when they don’t have any clean clothes and dinner is a bowl of cereal.