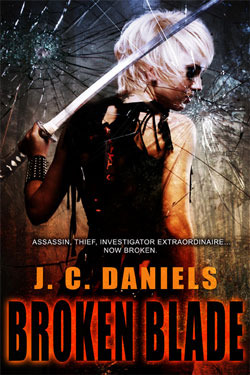 Warning: Spoilers from previous books in the Colbana Files series. Broken Blade is the long-awaited and much anticipated follow-up title to Night Blade by JC Daniels. I HIGHLY recommend that anyone new to this series start with the first book and read the second book before picking up Broken Blade, the third title in the series.

Broken Blade opens approximately four months after the conclusion of Night Blade. Our heroine, Kit Colbana, is broken and has been reduced to hiding in a closet. She works at her friend TJ’s bar, while barely existing from moment to moment. It’s not often that a UF heroine is truly broken. Usually she will encounter tragedies and find a way to move on before she hits rock bottom. But not Kit. She has been utterly destroyed from her captivity by vampire Jude, the abandonment of her shift-mate, Damon, and the loss of her bond with her sword. After going through all of that with Kit in Night Blade, reading the first few chapters of this book hurt. It has been such an emotional journey, I am glad and thankful that the author allows the reader to share Kit’s lowest points.

The first part of the book is titled “Broken,” and for good reason. Ms. Daniels successfully captures the fear and pain of this broken woman. She manages to convey these emotions so clearly that I was in tears and hurting along side Kit. Yet Kit needs to find a way to move forward, and she does so with a grace that only Kit could pull off. As the story progresses, we are privy to Kit’s thoughts and feelings as she makes initial contact with her lover and past associates. Every single encounter is difficult to work through, but she survives.

What I admire is that Kit is NOT the same woman she was before the events of the previous book. She finds her way out of the closet she in which she was hiding, but she isn’t necessarily healed. I think that Kit’s story resonates with readers so strongly because most of us at some point in our lives have felt broken. Hopefully not to the extent that Kit has had to endure, but her emotional journey becomes the readers journey and cross to bear. It hits something inside and allows a deep connection with this character.

The story of Broken Blade is not solely about Kit’s journey back from the darkness and the dynamics of those around her. As part of her healing, she takes on a case as a favor to TJ. This first case someone mirrors Kit’s own life, and it also forces her to deal with Damon and the cat clan. These steps help her move forward, and I found the story interesting as well as successful storytelling.

Part two of the book is titled “ReMade,” and it chronicles Kit’s life as she moves out of TJ’s and back into her own space and office. With her now-constant sidekick (and friend) Justin, Kit takes on a mysterious case involving ancient magic and an old woman looking for a lost vase. While I was a little leery of Justin taking on such a large role in Kit’s life, I felt that the author handled his character marvelously. He has Kit’s back, which is sorely needed since she has lost some of her edge, and she doesn’t have the magical powers that Justin does. However, at one point, it was almost as if their roles were reversed, with Kit needing to “comfort” Justin and all that has happened to him. This was a little off for me.

Of course, there is much more to the story than finding the old woman’s missing vase. The twist and subsequent mythology that Ms. Daniels creates is incredibly interesting. However, it is complex, and it took several bouts of information dumping to get through it all. After a while, I felt that it began to detract from my enjoyment of the story, and the book lost some of the intimacy that I value so much.

Luckily, once the entire story is out there, Kit and crew formulate a plan to deal with the impending disaster. The final scenes of the book are fabulous. I love the final showdown: it was quick, but effective. In addition, the author sheds some light on the background of one of the characters. Finally, I feel that Ms. Daniels handled Kit’s recovery and relationship with Damon perfectly. Both characters undergo some growth, but I don’t want to give anything away, so I will leave it at that.

Overall, I love this series, and I love Kit. Broken Blade a great addition to the Colbana Files series. I liked the storyline and loved watching Kit find her way back. While I found the additional mythology interesting, the sheer volume of information and way it was disseminated to the reader seemed to take away from the flow of the story and overall enjoyment. However, Broken Blade is still a great story, and I cannot wait for the next one!

Kit Colbana: assassin, thief, investigator extraordinaire. Now broken. She always expected her past to catch up with her but never like this. Haunted by nightmares and stripped of her identity, she’s retreated to Wolf Haven, the no-man’s land where she found refuge years before. But while she might want to hide away from the rest of the world, the rest of the world isn’t taking the hint.

Dragged kicking and screaming back into life, Kit is thrust head-first into an investigation surrounding the theft of an ancient relic…one that she wants nothing to do with. Her instincts tell her it’s a bad idea to just leave the relic lying about, but finding it might be just as bad.

Forced to face her nightmares, she uncovers hidden strength and comes face to face with one of the world’s original monsters.

If she survives the job, she won’t be the same…and neither will those closest to her.