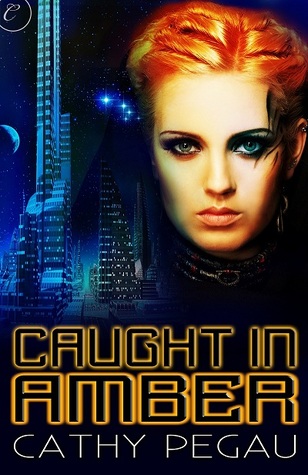 Reading like an exciting suspense romance, Caught in Amber is a wonderful science fiction tale that follows the story of Sasha James and Nathan Sterling. Sasha is a recovering drug-addict parolee who, five years ago was the girlfriend of Guy Christiansen, a wealthy drug supplier, and she was living the high-life and getting messed up. When she left/he kicked her out, she turned to crime to pay for her addiction to the drug called Amber. Now she lives a simple life under the thumb of the corrections system, staying clean and working hard.

Nathan Sterling is man of the law who needs and wants Sasha to lead him to the one person she can’t ever see again, her ex. Guy has employed Nathan’s little sister, Kylie, who is now wrapped up in the glamorous yet dangerous lifestyle. Although he doesn’t want to hurt Sasha, he will do anything, including using Sasha, to get close to Guy and get his sister out.

Although Caught in Amber is a sci-fi story–taking place on an unknown, futuristic planet–the story itself is not. The plot is well-written and could take place anywhere on Earth, yet the futuristic setting gives the story some advantages, such as advanced technology to help addicts. So don’t shy away because of the “sci-fi” label – it’s a great story that happens to be on another world with a few futuristic gadgets. The emphasis of the tale is on the characters and plot with the sci-fi pieces as the setting and props.

Nathan and Sasha have a slow brewing romance, but it is sexy, hot and passionate when they allow their true emotions to surface. At first, one may attribute their mutual attraction to the excitement of a dangerous situation, and I felt that Nathan was a little too emotional about and upset over his need to protect Sasha. I felt like the author hadn’t done enough work to establish a deep enough relationship to warrant the strength of his passion. However, as the story progressed, their lives become more intertwined and their mutual passion explodes. Although it is a slow-moving start to their relationship, by the time they do have sex, it is hot and explosive.

The term “caught in Amber” refers to the state of being high and/or addicted to Amber, a powerful, narcotic drug. I appreciate that although drug abuse and addiction is a difficult topic, it is given a seriousness that doesn’t overwhelm the reader, nor does it make light of the situation. Sasha is an extremely strong heroine who recognizes her mistakes and is working hard to right wrongs. This sense of morality serves her character well and helps drive the storyline. She is tough when need be, yet kind and tender. Put that together with a tough, protective hero and you have great chemistry.

One thing that I love about the book, is the author’s ability to set the stage and mood with simple, yet detailed phases and sentences. Ms. Pegau’s ability to describe the ordinary is a wonderful asset. Here are a couple of examples:

Outside, the sharp wind whistled through the trees and sent a cloud of dry, dusty snow across the parking lot.

Guy stood beside a metal desk near the door. His immaculate white shirt wasn’t tucked in and his charcoal trousers had a crisp crease down each leg.

The plot of the book is to rescue Kylie before it is too late. There is quite a bit of suspense wrapped up in this tale, keeping me gripping the edges of my Kindle until I was finished. The biggest two worries were: wondering if Guy would figure out that Nathan and Sasha are lying to him, and would Sasha fall into the temptation of Amber. Yet even within the main story are additional exciting subplots, which are woven around the entire tale. Ms. Pegau also creates a nice conflict with Guy, who is somewhat of a sympathetic bad guy. He comes across as a good boss and businessman, albeit a criminal. It appears that he genuinely cares about Sasha and her well-being, even though he abandoned her when she was at her lowest.

Overall Caught in Amber is an exciting and entertaining story. The romance is a bit slow at first, but heats up with passion as the story processes. The heart of the tale is a suspenseful ride, keeping my interest until the very end. The characters are well-written and generally likable. I am glad to see that two of the more interesting supporting players will be back for their own story in the subsequent novel. I recommend Caught in Amber to fans of romance – regardless of the science-fiction label.

Recently out of rehab, Sasha James is determined to keep her head down, complete her parole and never touch amber again. The chip in her neck controls her cravings for the highly addictive drug, but also tracks her every move. Not that she goes anywhere other than work and the halfway house she calls home—a far cry from her luxurious former life as lover of the mining colony’s top drug dealer, Guy Christiansen.

Agent Nathan Sterling has no desire to see Sasha fall back into amber, but his sister has become Guy’s latest conquest and the unexpectedly attractive Sasha is the key to getting her back. So in exchange for an introduction, he offers Sasha the one thing she can’t refuse—her freedom. From the chip, her parole and even the planet if she wants. Though he would be sorry to see her go…

Torn between her growing attraction to Nathan, fear of Guy and the allure of amber, Sasha accepts. But who will save her if Guy refuses to let her go a second time?

3 responses to “Review: Caught in Amber by Cathy Pegau”