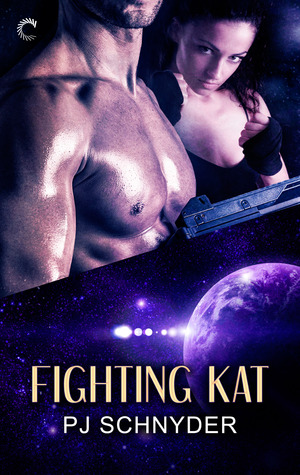 Fighting Kat is the much-anticipated sequel to the first book in The Triton Experiment series, Hunting Kat.  Gikany and Una enjoyed the first book and were eager to see what transpired next for our panther shifter, Kat.  Ms. Schnyder did not disappoint us.

The story begins a bit after Hunting Kat ended.  Rygard and Kat have continued their relationship, albeit, a long distance one (light-years of distance that is).  Long distance relationships are always difficult, and Ms. Schnyder does a really lovely job in showing how their relationship progresses, despite the physical separation.  We enjoyed watching them be together even when “together” meant a holo-projection.

Through Fighting Kat we are able to better see Kat’s struggle to maintain a “human” front while battling her panther’s urges.  The relationship between Kat and her captain, Rishkillian and between her and Skuld give a very well-rounded sense of her character and personality.  Skuld is just pure awesomeness (along with her pet ferret) and their deep friendship is grounding.  The almost father/elder brother relationship she has with Rishkillian gives Kat a safety net and security.  The interactions between them are poignant and we very much enjoyed them.

What really gripped us though was the journey that Rygard and Kat take in Fighting Kat.  Although Rygard has seen Kat’s panther form, he never truly interacted with her one-on-one before.  In this story, he not only interacts but also must learn to fight with her as a unit if they are to rescue his men alive.  We loved the honesty of the situation.  There is a moment when Kat is in panther form and moves close to Rygard.  He never once reaches out to pet her or touch her.  Rygard maintains a distance.  Though we are not privy to his thoughts, we are sure he is trying to process that this dangerous predator is his sweetheart.  There is no sudden acceptance; it is a journey they are on.  Ms. Schnyder doesn’t cheapen the relationship and we enjoyed the honesty of it.

We’d be remiss to not mention the curious and mysterious Bharguest.  He is an unlikely ally who, throughout the novel, you keep waiting to stab everyone in the back.  He is like a train wreck – you know it is coming but you cannot look away.  You just keep your eyes peeled for that moment.  There is another, not necessarily bad guy, but an antagonist to Kat in the form of Captain Petrico-Calin IV.  Yes, you have to say, “the fourth”, he is that much of a prick.  Waiting for his comeuppance was another reason we found this novel difficult to put down.  Between saving Rygard’s men, waiting for Bharguest to turn on them, hoping for Captain Petrico-Calin IV to get his proverbial poetic justice, and watching Kat navigate this along with her own insecurities with Rygard…it is no wonder we ended up reading it in one sitting.

If you haven’t tried the Triton Experiment series yet, please do.  This is a series that needs to be read from the first book as it chronicles Kat and her growth.  This growth includes the relationship that begins in Hunting Kat.  Take a chance and see what you think of this fascinating and beautiful science-fiction love story.

Intergalactic mercenary Kat Darah has been ordered to keep her shape-shifting ability a secret from everyone but those closest to her, for her own safety. She’s learned how to control the feral rage… for the most part. But when Lieutenant Rygard’s military unit goes missing, she’ll use every skill she has to find her man.

Lt. Christopher Rygard has witnessed his girl shift, and he still wants her. After Kat rescues him from alien clutches, he’d like nothing more than to wrap her in his arms again, but his first duty is to his men. And half of them have been shipped off-planet to be sold as slaves.

Kat and Rygard will need to form a new team to go deep undercover, posing as gladiators and learning to fight together—not just side by side—in order to survive. In the arena, it’s all about who is the strongest predator…