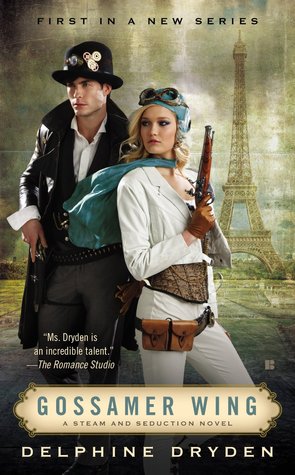 Gossamer Wing is the debut novel in a new steampunk series.  The Steam and Seduction series is science-light and romance driven, with some espionage on the side. I recommend visiting the author’s website to get an overview of this series before you start Gossamer Wing.  It is advantageous to learn some background that you cannot glean from reading.  This is an alternate universe – one in which the American Revolution did not occur.  Not that this is a key element to the plot line, but it clears up some minor confusion I had while reading regarding the world.

Gossamer Wing is told through the perspective of three characters: Charlotte – the heroine, Dexter – the hero, and Martin – the villain. Even though it is evident to the reader what is going on, it is still exciting and fascinating to watch as each side tries to figure out what the other is doing.  I especially enjoyed seeing both sides of our romantic couple as they try to handle the passion that each ignites in the other and watching as their lust for one another evolves into a true love.

One aspect that I love about steampunk romance is the balance between science (I am a geek at heart) and historical romance.  I found that the tech in Gossamer Wing was light.  If you are not techno-geeky, then this is a great series for you.  It won’t bog you down with explanations or the Nuevo science that is created by the alternate universe.  However, for geek lovers like me, you may find the balance a little off.  There are moments while reading when I questioned the technology, and because the author made the very deliberate decision that the steam part of the punk is not aliens or microscopic entities, I found myself a bit more critical. It did not necessarily detract from my overall enjoyment, but it did hinder it a bit.  If I had read the introduction to the series that is on Ms. Dryden’s website, I would have read Gossamer Wing with different eyes and found it more enjoyable. However, I will say it got me thinking and rereading sections of the story because I wanted to figure the science out

If you are looking for a different and more romance driven steampunk, look no further than Gossamer Wing.  The story of Charlotte and Dexter is passionate and exciting.  Not to mention, there are few fun twists in play as well.  I look forward to the next novel in the Steam and Seduction series, Scarlet Devices, due out early next month.

Rating:  B Liked It – Recommend

A Spy. An Airship. And a Broken Heart.

After losing her husband to a rogue French agent, Charlotte Moncrieffe wants to make her mark in international espionage. And what could be better for recovering secret long-lost documents from the Palais Garnier than her stealth dirigible, Gossamer Wing? Her spymaster father has one condition: He won’t send her to Paris without an ironclad cover.

Dexter Hardison prefers inventing to politics, but his title as Makesmith Baron and his formidable skills make him an ideal husband-imposter for Charlotte. And the unorthodox undercover arrangement would help him in his own field of discovery.

But from Charlotte and Dexter’s marriage of convenience comes a distraction—a passion that complicates an increasingly dangerous mission. For Charlotte, however, the thought of losing Dexter also opens her heart to a thrilling new future of love and adventure.