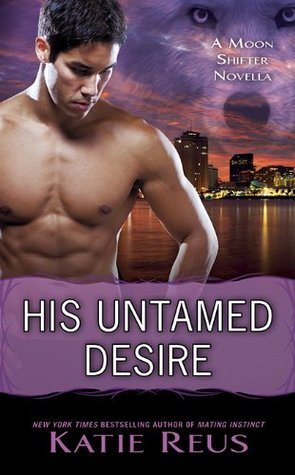 Gikany and Una enjoy the Moon Shifter series so when we saw this novella “extra” we jumped on it.  His Untamed Desire is a quick and fun read.  It does not need to be read in conjunction with the series (hint: great way to be introduced to the series) but it is a bit of back-story and set up for the upcoming release of Avenger’s Heat.  If you follow the series, you might want to pick it up.

His Untamed Desire is the story of Hector and Daphne.  It seems that Daphne is best friends with Hector’s younger sister Leta.  Although Daphne has always desired Hector, she thought he was not attracted to her.  Daphne’s suspicions were confirmed when she tried to kiss him before she left for college only to be rebuffed.  The novella begins with Daphne’s return home.  Dressed to kill, she goes to the local shifter club owned by her Alpha to show Hector just what he missed out on.  As we come to find out – Hector has NOT been unaffected by Daphne, and upon seeing her again, wants to mate with her now that she is all grown up.

We liked His Untamed Desire, we especially loved Hector.  He has such an iron core of honor.  He had ethical reasons for rebuffing Daphne long ago.  Hector wanted to let her grow up before he pursued her.  We enjoyed that pursuit of her in this story.  We found Daphne, though, less likable for us. As a heroine, her preference for being dominated was not our cup of tea.  We also thought she was a little too blasé about her stalker. However, Hector’s protective instincts bridged these issues for us.

Overall we liked His Untamed Desire and the story of Hector and Daphne.  We really enjoyed the glimpse of New Orleans and the melting-pot of paranormals that are able to coexist.  We eagerly look forward to Avenger’s Heat to see how these different groups work together to stop the kidnapping of pregnant shifters.  If you haven’t tried the Moon Shifter series yet, give His Untamed Desire a try – you might like it!

Rating: B — Liked It – Recommend

Lupine shifter Daphne’s recent move back home gives her a chance at the fierce and sexy male she’s always wanted: jaguar shifter Hector. Daphne plans to show him she’s all grown up, and more than enough woman for him. Unfortunately, a certain vampire has been harassing her and won’t take no for an answer.

Hector knows Daphne can take care of herself, but he immediately steps in to protect her. He’s lusted after the sweet and sensual woman for years. With circumstances forcing them to share a roof, Hector’s not hiding his attraction toward her any longer.

But Daphne’s not the only shifter with vampire problems: tensions between the two groups are rising all over New Orleans. Pregnant shifters are being kidnapped and Hector’s sister could be the next victim. When Daphne underestimates her stalker’s persistence, it might be too late for Hector to keep both of the women he loves safe.

One response to “Review: His Untamed Desire by Katie Reus”