How to Master Your Marquis 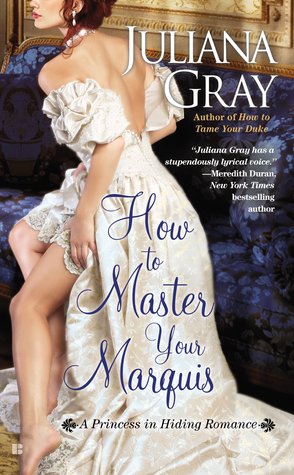 What I enjoy about Juliana Gray’s books are that they are unconventional tales of betrayal, trust and ultimately redemption. Rather than the typical damsel in distress, she gives us charmingly flawed heroes and smart, strong women who find themselves in odd situations doing highly dangerous things. How to Master Your Marquis was no different.

Our hero Haltherfield is a charming, devoted, strong, scarred and wounded hero who finds his path to redemption in Stephanie, a princess in hiding working as a law clerk. She is snarky, cheeky, funny and excellent to read. Together they are the perfect combination of sugar and spice, base and acid, humor and heat. Their chemistry is strong, and although I thought they jumped into bed a bit quickly (a princess would have been raised better than that) it didn’t feel completely out of character with Stephanie’s impetuous character like it would have with her sisters.   But I felt like the physical chemistry downplayed the emotional connection they had, which was unfortunate because Ms. Gray is quite good as developing the emotional side of her characters.

My other struggle at times was the back and forth style of the book. Because the time frame is so short I sometimes struggled to know exactly where I was in the timeline, and I would have to go back a few pages and reread to remind myself of where and when I was, which was unnecessary given that this book could have been written in a linear fashion and lost nothing. I commend Ms. Gray for attempting the challenge but felt she fell short in this effort.

Other than these couple issues, overall I found the book to be fun, entertaining and all around a good read. Stephanie, like her sister, is bright, charming, strong-willed and a lot of fun to get to know. Haltherfield is loving and strong, despite an ugly past. His ability to move on, forgive, and love is a testament to his character and Ms. Gray’s writing abilities. There were several spots in the story where things could have been weighed down, but they were handled with the perfect amount of strength, tenderness and humor, keeping the story line moving forward, giving the reader the information they need without coming off like an after school special or a day time talk show.

If you are a fan of the Princesses in Hiding Trilogy or are looking for an unconventional Victorian Romance novel, you are likely to enjoy Princess Stephanie and Haltherfield her Marquis, as they discover love and redemption together.

Of all her sisters, Princess Stefanie is by far the least amenable to law and order, which is why she’s appalled to find herself masquerading as an unbearably drab clerk for the most honorable barrister in England. But her dull disguise turns out to have its privileges: namely, the opportunity to consort unchaperoned with her employer’s exceedingly handsome nephew, James Lambert, the Marquess of Hatherfield.

Hatherfield quickly realizes that his uncle’s spirited new clerk is, in fact, a lovely young woman of daring habits. The outwardly impeccable marquis isn’t about to reveal her deception. After all, he’s hiding a dangerous secret of his own. But when one too many escapades with the madcap princess bring Hatherfield’s troubled past to light, it is only Stefanie’s sharp wits that stand between the marquis and utter disaster, and only Hatherfield’s daring that can save the princess from the shadowy agents bent on finding her.

Purchase Info:
How to Master Your Marquis (A Princess in Hiding #2)

Reviews in the Series:
How to Tame Your Duke by Juliana Gray (A Princess In Hiding #1)

One response to “Review: How to Master Your Marquis by Juliana Gray”