Posted January 27, 2014 by B. in Lesbian Romance, LGBTQ, Rating B, Reviews Tags: Bs-review, novella, Riptide Publishing, Sarah Brooks, The Beginning of Us

The Beginning of Us 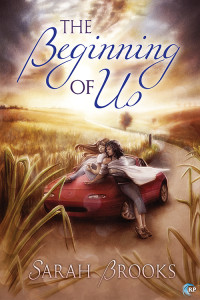 The Beginning of Us is the story of the early days of a relationship between Tara Haus, a twenty-one year old college student, and her professor, Eliza Moore. Told from Tara’s perspective, it is a memoir of self-discovery, written to the absent Eliza, as a means of denying the very real possibility that the love Tara is so certain has grown between them never really existed at all. Not to be dismissed as the ramblings of a lovesick young woman, however, it is a cathartic examination of a specific, and momentous, period of time and growth in Tara’s life.

I liked Tara a great deal from the beginning, and found her very easy to connect with as the story progressed. Her “awakening” throughout the narrative is filled with complicated moments of elation and despair, yet she never tries to hide from the truths she uncovers about herself along the way. After the initial panic, confusion, and hurt of suddenly missing someone who shouldn’t be gone, Tara begins to tell Eliza about herself in a Word document, coming to new conclusions about both of them in the process. Ms. Brooks captures the feeling of discovery very well, whether in Tara’s elation after her first class with Eliza, her sudden acceptance of her sexuality while biking over the hills outside of campus, or even her realization that Eliza isn’t the dazzling, fearless person she initially seemed to be. Tara is open and honest from the start, cycling through the bouts of questioning and acceptance with admirable determination.

Eliza, on the other hand, I wasn’t as fond of. Eight years older than Tara, and fully aware of the younger woman’s attraction, Eliza is unsteady and self-centered. Her concern over the possible threat that loving another woman—and a student—might be to her meticulously constructed plans is understandable, especially given the intolerance she’s always known, but the mixed signals she perpetually sends Tara are not. As a professor, Eliza seems perfect at first, her challenge to her students providing the initial spark that alters Tara’s path irrevocably. Eventually, Tara realizes that Eliza may be enthusiastic about teaching young minds to break free of the bonds that hold them down, but she’s terrified of flying herself. Frankly, Tara deserves better.

Despite the title, the relationship evolving between Tara and Eliza is only part of The Beginning of Us. Tara’s realization that she’s lesbian, and her subsequent testing of that awareness, was a pleasure to read, particularly as she becomes more conscious of her own strength in the face of Eliza’s uncertainty. It is noteworthy that so much of Tara’s journey happens while she is away from Eliza, the moments of introspection and confrontation that reinforce Tara’s certainty about her sexuality becoming things she feels she has to hide from Eliza until she fears she might have already lost her.

Written in the form of a letter that might never be sent, The Beginning of Us is unique take on stories about growing up and finding love. Tara is a remarkable character, not turning away from who she’s becoming in favor of an easier path, but facing each challenge with determination and grace. While the ending of the story was somewhat awkward, I very much appreciated Ms. Brooks’ ability to so adeptly portray the feelings that a woman Tara’s age might be contending with in her situation. In the end, The Beginning of Us left me wishing both Tara and Eliza well, and I’d very much like to know how things turn out for them in the future.

Rating:  B Liked It — Recommend

Eliza,
Where are you? I’m listening, watching, waiting for you. I need you. How dare you run away? Where’s the courage, the fearlessness I fell in love with?

I don’t know what else to do but write. It’s dark in my dorm room, and the wind rattles the panes of my window, and I’m supposed to be driving to my parents’ right now for winter break, but I can’t feel my arms or my legs, and my chest aches because I don’t know where you’ve gone. Or why.

I know I shouldn’t have fallen in love with my professor. But you inspired me when you stood in front of the class, telling us to find our authentic selves. And I did—with you. How could I know that you would be so afraid of this, of us? That you’d be so terrified of . . . yourself? Wherever you are, Eliza, hear me—and come back to me.

Purchase Info:
The Beginning of Us

For more from the author… be sure to read Sarah Brook’s post on the inspiration for The Beginning of Us, and enter to win a $25 Amazon GC HERE.