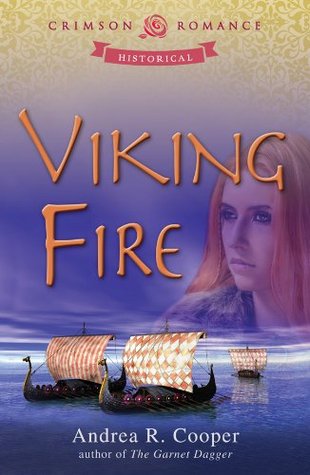 I adore historical fiction when the Irish or Scottish are involved. I am completely fascinated by Norse/Viking history. Imagine my giddy glee when I was offered the opportunity to read a title that combined both! However, I’m not sure exactly why, but I was disappointed with this book.

There were a lot of things that detracted from my enjoyment of Viking Fire. I didn’t get enough description of the landscape, nor the things that attract me to the time period. During this period in history, religion was important. Mother Earth was the be-all, end-all. Until the end of the book, nothing was mentioned about Druidism. Mention of Norse belief systems were oaths uttered. Even the blurb mentions myth and magic.

There are usage errors that WORD wouldn’t catch. Really, I’m not a snob about these things (ok, maybe I am…), and I would probably have been alright with them if the story had been more captivating. The plot was predictable, and the conflict was pretty much meh for me. I almost felt like we were just reading Kaireen’s diary.

I liked the two main characters, for the most part. I also liked Kaireen’s handmaid. A lot. At times, I felt she drove the plot. Kaireen’s parents were incidental characters, and I felt that their presence was mainly conflict-based. While parents do have their place in conflict in historical titles, for me, there needs to be redeeming interactions when there’s conflict with the ‘rents. The ‘other’ clan, the O’Neills, provided the bulk of the conflict. To me, the younger brother seemed like a psychotic, spoiled brat that didn’t get the prize out of the cereal box.

I did see the romance between Bram and Kaireen, and I like the way it played out. I would have liked to see more between them, but understand the author’s plot development between them. Their chemistry was palpable from the first moment they met. The foreshadowing about Bram was pretty much the only thing I’d not predicted in the entire story before hints were dropped. I wanted more stolen moments. I wanted Kaireen to declare her love for Bram after the fire at her sister’s house. I wanted Kaireen even more frantic and compelled to see Bram than she already was. As a reader, knowing that two characters have declared their love for one another gets me more invested. Even if Kaireen hadn’t told Bram, if she’d told SOMEONE … that would have been fine with me. It seemed like loving Bram was her dirty little secret, and she was being a petulant child to defy her parents. Even though ‘everyone knew’.

Bram was the shining star in this title for me. Except we never were regaled with Viking/Norse religion. I wanted to hear more about stories from Bram’s childhood. There are several that would have beautifully tied into the story and helped to drive the plot. Bram’s heroism was stellar. I liked the way he became emotionally invested in Kaireen’s family – especially her sister – from his initial introduction. I liked the way he gave Kaireen space to make her own decisions and be headstrong. Because those were qualities he loved about her.

I wanted to like Viking Fire. I really tried. Mr. VampBard can attest to the fact that I started out sighing and shaking my head, which turned in to groans. Then muttering. Ms. Cooper did a great job with the development of her two main characters. I wished, however, that the bulk of the story were further developed and embraced the culture, religion, and general feeling of the time period.

856 CE, Ireland is a land of myth, magic, and blood. Viking raiders have fought the Irish for over half a century. Rival Irish clans promise only betrayal and carnage.

Kaireen, daughter of Laird Liannon, is suddenly forced into an arranged marriage with her sworn enemy, a Viking. She refuses to submit. With no mention of love, only land and the protection of her clan, she endeavors to get her betrothed banished from her country. Will love find its way around her stubborn heart?

Bram, the Viking, finds himself without future or inheritance as a younger son in his family. A marriage to the Laird’s daughter would grant him land if he swears fidelity and if his men will fight along with the Liannons against any foe—Irish or Viking. However, the Laird’s feisty daughter only holds animosity for him and his kind. Is marriage worth the battle scars of such a relentless opponent?

With the blame for a rival laird’s death treacherously set against the Liannons, Kaireen and Bram must find a way to lay aside their differences as an unforeseen darkness sends death snapping at their heels.