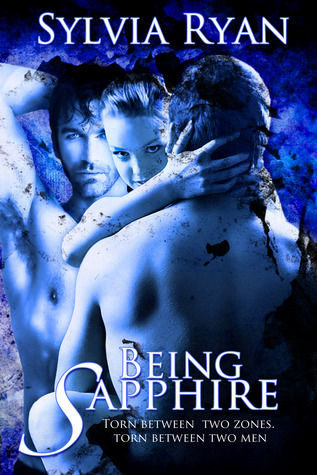 I’m a big fan of Sylvia Ryan. I read a novella by her several months ago, and I just adored her voice. I liked the way she was straight-forward about difficult subjects. Being Sapphire just solidifies my opinion of Ms. Ryan’s writing. As the second title in her New Atlanta series, it was my first venture into the series, and I felt as though there was enough detail to jump in where I was. Although, I did try to find the first title in the series to read prior to reading this book. Wasn’t available on my preferred e-tailer. 🙁

There was only one thing that bugged me with this story, and that is there are brothers sharing a woman in this title. I consider myself to be pretty open-minded, and if I’d read the synopsis more carefully, I probably wouldn’t have chosen to read this title. I’ve no problem with m/f/m or any other combination of people, in whatever numbers and configurations rocks their world. I do, however, have a personal inner shudder every time there’s siblings involved. This probably bumped the rating (for me) down a smidge.

Here’s the fabulousness that is Being Sapphire! First, I loved the world-building. Having not read the first title in the series (Being Amber) I was fascinated by the depth Ms. Ryan gave to world-building in the second title of the series. I understood all the precepts of the universe, and felt as though I had a solid grasp on any backstory that may have been delivered during the first book. The futuristic dystopian society that Ms. Ryan presented is a unique blend of Fahrenheit 451 and The Walking Dead, for me. Well, sans zombies and the gratuitous violence.

Jordan, the strong and sassy heroine, is dealt a cruddy hand in life. With her history, and recent events, it’s no wonder that she’s got an ‘edge’ to her. Jordan’s journey during this title is HUGE. As a high-up in the Resistance, Jordan appears to keep herself isolated and in her role with everyone in which we’re introduced early on in the novel. Once she commits the first act in the Resistance’s plan to overthrow the Gov, things begin to snowball. In two directions. One, pelting Jordan with emotional fallout and the other into a world she never thought would exist for her. Meeting Patrick was probably the single-most important event in their relationship, as it started the ball rolling on a sequence of events that had a major impact on not only her own life, but Patrick’s, Shane’s and the lives of the O’Connor family. Jordan’s intensity and fervor for her position as a leader of the Amber Resistance didn’t give her the option to sit back and enjoy her romance, however.

Patrick O’Connor, Sapphire Guard, isn’t the typical Sapphire. His twin brother, Shane, had been moved to the Amber Zone when it was revealed when the boys were twenty-one that Shane is infertile due to a childhood illness. The process the Gov used to divide up people felt a bit like a Holocaust-ish Sorting Hat (ala Harry Potter) to me. Patrick and Shane had the whole twin-thing going on as kids. They were constantly together, shared everything, and loved every minute of it. Thus, it was rather difficult on both of them when they were split by the Gov.

Supporting characters were integral to the implementation of the Resistance plan. Without this conflict, the story would have fizzled out. This conflict snowballed into even more conflict. Some of it, I never saw coming. Without the O’Connor parents and all the Irish ladies, as well as the Amber Resistance, it would have appeared that the Ambers were just rolling over and taking whatever the Gov dished out.

The romance in Being Sapphire was definitely well-constructed. Especially since Jordan was involved with both of the twins, in some manner, throughout most of the book. I was completely giddy with the relationship development between Jordan and Patrick. Their forbidden love – she an Amber, he a Sapphire – was the typical cross-class romance. The way Patrick was so smitten by Jordan was sweet, and I enjoyed watching them attempt ‘normal’. Conversely, Shane’s relationship with Jordan was anything but conventional. Shane was a CALM Therapy practitioner. This therapy uses Dominance and submission to create order out of perceived chaos in the life of the submissive. Shane stepped into the role of her CALM Therapist after a devastating event. Little did Shane and Jordan realize that their relationship was more involved. Twins. One girl. Um. Wow. The inner conflict of all three characters was fabulous. Watching the evolution compelled me to finish the story in the wee hours of the morning.

I’m excited to read the next installment of Ms. Ryan’s New Atlanta series, set in the Emerald Zone! I’m captivated by this dystopian society and can’t wait to see what’s in store for the Resistance.

Jordan Ford has struggled against all odds to become third in command of the Resistance. Her goal is ousting General Morgan from power and ending the Repopulation Laws. As liaison between the Resistance members in the Amber Zone and those in the Sapphire Zone, she bridges the chasm between the sectors.

Patrick O’Connor is a soldier in the army that keeps the Zones separated. When Patrick’s twin, Shane, is ripped from the family and dumped in the Amber Zone, it leaves a gaping wound in the O’Connor clan. But Patrick finds a way to join the Resistance to reconnect with Shane.

The Amber and Sapphire Zones collide when Jordan runs from her first act of sabotage…straight into Patrick’s arms. The O’Connor clan is recruited into helping her build a Sapphire Resistance, Including Shane, who doesn’t hesitate when Patrick leads his brother right to Jordan’s door.

Splitting her time between two zones, Jordan can’t fight the attraction she feels for brothers. Can she survive her next mission, the revelation of her secrets, and being torn between two men who love each other more than they love her?

2 responses to “Review: Being Sapphire by Sylvia Ryan”