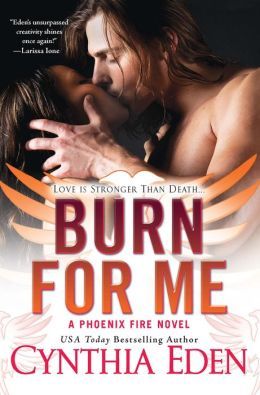 Burn for Me kicks off a new paranormal romance series by author Cynthia Eden. The Phoenix Fire series features a world in which paranormal beings have revealed themselves to the human world, roughly ten years prior to the start of this book. Unfortunately, there are some humans that have known about the paranormals long before then and are exploiting them for research and “humankind betterment.” One such person is Dr. Richard Wyatt, who heads the Genesis Labs, and is a monster when it comes to basic morality.

Eve Bradley, undercover at Genesis, is working to obtain evidence of the atrocities rumored to happen. When she meets Subject Thirteen (Cain O’Conner) sparks fly – literally. He can withstand any amount of torture Wyatt tosses his way, only to die, burn, and be reborn with a fiery beast inside. Cain and his beast are attracted to (and maybe even calmed by) Eve. Eve uses this to her advantage to help Cain and others escape Genesis; however, now she is on-the-run and in danger of becoming Wyatt’s next experiment.

Burn for Me is my first Cynthia Eden title, and I was immediately drawn in. She has created a familiar world, with just enough differences and uniqueness to make it engrossing. I was fascinated with Cain and his nature. The mythological phoenix is not a creature normally found in PNR, and I want more! Besides Cain, there are other fire-related paranormals, as well as vampires and shifters/weres. However, what really puts a twist in the world-building is the genetic experimentation that Wyatt and his father perform, giving rise to all kinds of possible creatures. Wyatt’s obsessiveness for twisted torture in the name of science is dark and oddly captivating.

Cain and Eve share an immediate attraction and act on their lust fairly quickly. While overall their scenes were hot, I didn’t feel a strong emotional connection to the pair. I enjoyed their ups and downs, routing for them to not only survive, but earn their HEA. Yet they each had flaws that began to annoy me after a while.

Eve is a strong woman, and someone I can get behind. However, she was a little to “good” for me. She wanted to save everyone, to include Wyatt at one point. She took too many extreme or dangerous risks in the name of saving another. I understand she is not a violent person, and she does have her motives; however, sometimes the bad guys just need to be destroyed. Cain, on the other hand, was deliciously dark and moody, which I found very appealing. However, he was a bit to aggressive at trying to convince Eve he was a bad guy. His back and forth swings started to give me a little whiplash.

Other than the primary antagonist, Wyatt, there are two other characters with large supporting roles. I really liked Trace, Eve’s long-time friend; however, I’m not certain if I like the direction his storyline took towards the end of the book. The other is Ryder, a vamp and fellow hostage at Genesis. He had some good moments, but wow – a bit manic at times. I am very curious to find out more about Ryder, and I hope he ends up on my “good side.”

I only had one “big” issue with the story, which was the repetitive nature of the overall storyline. Cain and Eve were on the run and caught and on the run and caught one too many times. Also, while the concept of the genetic experimentation was interesting and exciting, I felt there was one too many times we would find out something about one of the characters at the eleventh hour that prevented them from being permanently harmed.

Overall I enjoyed Burn for Me, the first book in the Phoenix Fire series. The concept of a phoenix is fascinating. The romance between Cain and Eve was pretty steamy although not entirely engaging. The story was fun, dark and twisted at times. Even though I had a few issues with the storyline, I enjoyed the tale. I am excited to see how the next story plays out, especially now that the groundwork has been laid, and we won’t need a lot of world-building.

Eve Bradley was undercover looking for a story, not a cause. But something about the man they called Subject Thirteen got her involved. The scientists said he was a devil, and they had a decent case: Terrifying power. A bad attitude. And looks that could lead anyone to sin…

Cain O’Connor knows the minute he catches her candy scent that Eve could drive him wild. But she’s a threat–in a way no one has been for him in years. She’s safer away from him, too. But with a powerful conspiracy determined to shut Eve up for good, there’s no time to argue. All they can do is trust their instincts–and their hearts…

One response to “Review: Burn for Me by Cynthia Eden”