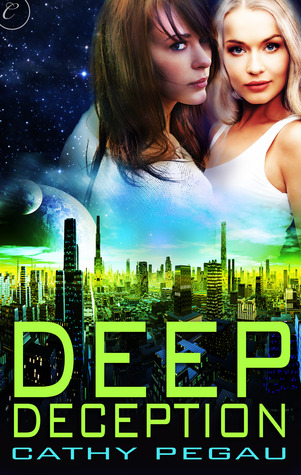 Senior Colonial Mining Authority agent Natalia Hallowell prides herself on her relentless pursuit of justice and her strong work ethic. So when she finds out that she is accused of taking bribes and illegally collecting evidence, she is angry and hurt. In order to deal with her work frustrations, Natalia looks to a few drinks and a one-night stand to ease the pain. That is until she meets Gennie. An immediate attraction sends Natalia to Gennie’s hotel room, only to be knocked out and tied up – but not in a fun way! Gennie is desperate to get off world, and needs assistance. She pleads for Natalia’s help to bring down the Reyes family – a well-known mining corporation. Reluctantly, Natalia agrees to help Gennie, and in order to bring down the Reyes, Gennie and Natalia must go undercover in a small mining district to uncover some anomalies in their shipping manifests.

Although a stand alone story, Deep Deception is loosely tied to two other books in an unnamed science fiction romance series. Natalia and Gennie both have roles in the previous book, Caught in Amber: Natalia is a confidant and sometimes partner to Nathan Sterling, CiA’s hero, and Gennie, aka Genevieve, was the assistant to Guy Christiansen, CiA’s antagonist. Deep Deception takes place about six months after the conclusion of Caught in Amber. One does not need to have read the previous books to enjoy this one.

Deep Deception is aptly named, with layers of lies and treachery that unfold throughout the tale. Since the story is shared from both Gennie and Natalia’s point-of-views, the reader is privy to some of the half-truths and deceptions, but the hefty lies are unveiled only as the story climaxes. While I enjoyed the complexity of the storyline, I did get frustrated at Gennie’s reluctancy to open up and trust Natalia. And maybe it’s the mystery-solver in me, but I felt like there were setups for problems and conspiracies that never came to be. I was suspicious of everyone, and therefore, a little disappointed when side stories would just peter out. However, the mystery of what is happening in South Meridian is a bit nerve-wracking. I was a bit on edge whenever the women did their spying–convinced something terrible would happen.

Gennie and Natalia enjoy a strong mutual attraction; however mistrust and reluctancy keep the pair from acting out on their desires for quite some time. I had mixed feelings towards the pair. I enjoyed the attraction and cheered for them; however, the hot-and-cold nature of each wore me down. For far too long, each fought the attraction for various (and valid) reasons, sharing with the reader numerous inner monologues about the need to stop looking at the other woman or wondering why the other would be interested. The continual analysis of the situation and each woman’s feelings became repetitive and tiresome after a while.

I did enjoy the pair’s time in South Meridian at the mining site. Once again, Ms. Pegau provides spectacular detail, painting vividly striking scenes. After reading this book, I felt like I could run the machinery at an off-world mining site! Natalia, needing to keep busy while on administrative leave, slips back into her old life as a simplistic minor – known as a pirq. Her family has a history of living as pirqs, dating back several generations. Experiencing her return to that life from her POV is thoughtful and engaging. It’s clear that this tough agent has an emotional bond to the land and life, and this section of the story is well done.

Once the pair has the evidence needed to help Gennie escape, the book changes quite a lot. At this point, the layers of deception really start to come to light, and the pace of the book picks up tremendously. The pair are fighting assaults on multiple fronts, while trying to piece together several puzzle parts that don’t necessarily fit. At times I had a little trouble following who did what and why, but in the end it all shakes out just fine.

Overall, I enjoyed Deep Deception, but when it was all said and done, it felt too long. There are probably sections that could have been edited out in order to streamline the story. For example, the detail of the mining operations was spectacular, but ultimately not necessary for the final outcome. The romance between Natalia and Gennie ran hot and cold for me. I liked them and wanted to see their relationship blossom, but got frustrated by their continual and prolonged apprehension. I wish I had more time with just the couple getting to better know one another. But in the end, Deep Deception was an entertaining and interesting read – especially for inner-engineering geek.

Rating:  B- Liked It – But I had a few small issues

Colonial Mining Authority agent Natalia Hallowell doesn’t always play by the rules, but she wouldn’t compromise a case either. Put on administrative leave under a cloud of accusation, with no support from her boss, Natalia seeks a little anonymous companionship at her favorite bar. But she’s surprised when the woman who catches her fancy starts buying her drinks.

Desperate, Genevieve “Gennie” Caine had no choice but to seduce, drug and tie Natalia to the bed to get her attention. With the Reyes Corporation after something she has, Gennie needs Natalia to open an investigation and distract them long enough for her to get off Nevarro.

Natalia doesn’t trust Gennie—despite the growing attraction between them—but the corporation’s suspiciously high profits convince her that they must be hiding something. But she has no idea just how deep the deceptions run…

Reviews in the Series:
Caught in Amber by Cathy Pegau (Book #2)