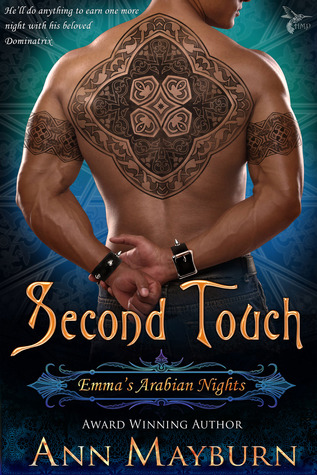 One night in Ryan’s arms and Emma Simonov’s life is completely upside down. At war with herself, she can’t reconcile the professional Domme she has to be with the woman who has lost her heart to her submissive. Feeling her carefully structured world spiraling out of control, she knows she’s no good to either herself or her clients like this, but she just can’t bring herself to give Ryan up. Can a man like Ryan really be understanding enough to give her what she needs? Can she be honest enough with herself to let him try?

Waking up alone after a perfect night with the woman he’s loved since high school left Ryan Darwish feeling confused and desperate. Now, he’s determined to not only earn Emma’s love, but be everything she could possibly want in a slave, as well as rescue her from her burdens, whether she’s asked him to, or not. While Emma has always demanded honesty from him, especially about his limits, giving himself to her body and soul blurs nearly every line he has, and crossing them, for her sake, might give him more pleasure than he’s ever known.

Second Touch, the next novella in the Emma’s Arabian Nights series, picks up where First Kiss left off. If the first story was about control, then this one seems to be about trust. Ryan wants Emma to rely on him, yet in his desperation, he hasn’t acted in a very trustworthy fashion. Emma needs to trust herself, and her belief in her calling as a Domme, if she’s ever going to be happy. As was true in First Kiss, Emma and Ryan find themselves at a crossroads: desperate for the life they know can only be had with each other, but unable to fully embrace their true natures in order to have it.

One of my favorite parts of Second Touch involved Ryan’s initiation to Emma’s world outside of the dungeon where she works. Ryan is an accomplished sub, but trying to prove himself to Emma on unfamiliar ground is a real eye opener for him. Lost between his possessiveness and his desire to be the best sub Emma could ever hope for, he’s thrown completely off-balance for a time, but learns a lot about himself, as well as what it truly means to serve Emma, in the process. This also happens to be the most intricately explicit scene in the story, and one that is worth rereading on the spot—just to make sure no details were overlooked, of course.

Second Touch is a genuinely interesting and erotically compelling addition to this series. Emma’s love for Ryan causes her to question her own worthiness as a Domme, and exposes her true fears about her vocation, based on the misconceptions of others. I was both disappointed by and delighted with Ryan in this story, and very much hope he can give himself over enough to be what Emma needs. While there was a looming sense that things would inevitably go wrong for Emma and Ryan again, what finally did transpire wasn’t at all what I expected. So far, Emma’s Arabian Nights keeps getting better, and with only one more story left in the series, I know I’ll be sorry for it to end.

After the best night of her life, Emma Simonov can’t find the strength to say goodbye to Ryan, her delicious Alpha male submissive. She would give anything to love the man of her dreams, but reality soon intrudes and she pays the price for her moment of weakness. A life full of responsibilities and duties means she must leave Ryan behind…and break her heart in the process.

If Ryan wasn’t already in love with his high-school crush, he is now after his date with his beloved Emma. When Emma refuses to speak to him, let alone see him, Ryan will do everything he can to have her back—setting into motion a series of events that will either bring them together forever, or tear them apart.

But Ryan isn’t the only one with an eye on Emma and he soon finds out that the price of winning Emma’s heart is far greater than either of them ever imagined.