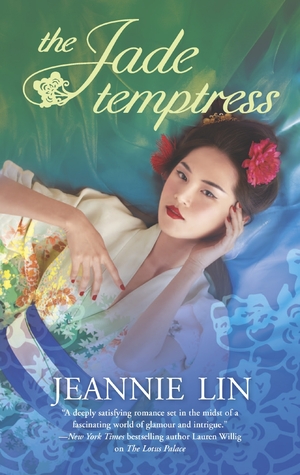 After being enthralled by The Lotus Palace, I wasn’t sure what to expect from The Jade Temptress.  Suffice to say, I was mesmerized by the story of Mingyu and Kaifeng.

The story picks up a year after the end of The Lotus Palace.  Mingyu continues to be the Lady of the Lotus Palace and a sought after courtesan.  However, Mingyu is no longer satisfied with her life not that much can change it.  But her life is unexpectedly and forever altered when her longtime patron, General Deng is murdered, and she is the one to find the body.  Not knowing what to do, she summons Kaifeng to the scene, the one man whom she has ever truly desired and who seems unaffected by her charms.

Ms. Lin truly captures the Tang Dynasty for me in the Pingkang Li Mysteries.  I love, absolutely love the rich but superficial beauty of this age that hides so much poverty and survival below it.  These beautiful courtesans who seem to be well kept talented women are slaves.  The contradictions of the times and the somewhat rigid hierarchy of the culture is gripping, adding a tension and undercurrent to the story.  Again, it seems our hero and heroine are star-crossed lovers, doomed from the start.  Such stark beauty masking so awful a truth below – it is gripping as you hope that Mingyu can somehow escape this situation.  Although she has blossomed and made the most of it, she is still a slave without much choice.

Yet, even for a man, Kaifeng is just as trapped.  Although a constable, he is neither educated nor from a wealthy family.  His position does offer him some honor but not enough to make him more than equal to a tradesman.  I find this reality fascinating and sad.  Kaifeng is a very intelligent man, who was educated by a foster father who was a physician.  Kaifeng is talented and yet stunted by his birth status.  Though it would vaguely appear that Kaifeng and Mingyu are in the same social class, they are worlds apart.  Yet their passion and personalities just fit.  Following them on this journey was gripping and heart-wrenching.  Although I had faith that Ms. Lin would provide that happy ending, the dark valley we had to walk through was torturous!

The conflict of the murder investigation and the unwanted attention of a rival and superior were engaging.  As the investigation unraveled, I was pleasantly surprised by the course of events.  The ending was just as shocking and utterly tragic.  But I do love the support that Mingyu’s in-laws offer.  Although she is not in the same class as they are, through the marriage of her sister to their son, they accept her.  I’m not sure if that was a common practice in that time period, most likely not.  But small moments such as this kept the light of hope throughout the story.  The relationship of Kaifeng to the magistrate was just as (somewhat) unconventional but yet refreshing.

Needless to say, I loved The Jade Temptress.  If you enjoyed a good mystery, star-crossed lovers and unbelievable odds read the Pingkang Li Mysteries.  Although you need not read The Lotus Palace in order to read The Jade Temptress, I would recommend it anyway.  It will give you a richer more connected enjoyment with the characters involved.  I eagerly wait for the next story in this series.

Charming and seductive, Mingyu is the most sought-after hostess in the pleasure quarter. She has all men wrapped around her finger—except Constable Wu Kaifeng, the one man she can’t resist, the only man to have placed her in chains.

Wu Kaifeng’s outwardly intimidating demeanor hides a reluctant, fierce attraction to beautiful Mingyu. But the passionate temptation she presents threatens to destroy them both when a powerful official is murdered and they find themselves on a deadly trail. Amid the chaos, a forbidden affair could change Mingyu’s fate forever, for following her heart is bound to have consequences…