The Problem with Promises 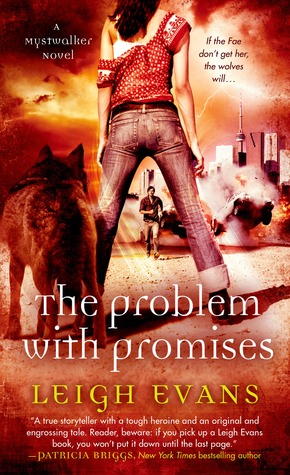 As with most urban fantasy series, the Mystwalker series books should be read from the beginning and in order, or the reader will miss out on substantial world development and character growth. In fact, I don’t know that I would have enjoyed The Problem with Promises nearly as much if I hadn’t spent my time in the trenches with Hedi and Robson. So with that, I highly recommend that any reader new to this series start with the first book, The Trouble with Fate.

The Mystwalker series chronicles the story of Hedi Peacock, a half-werewolf, half-fae who doesn’t fit in among either of the races. Her “one true thing” and mate Robson Trowbridge, is alpha to a pack of werewolves who don’t really know him and aren’t fans of Hedi. The Problem with Promises opens a couple of hours after the conclusion of the previous book, The Thing About Weres. The central characters are all present to discuss strategy and create a plan of action to deal with two major events that occurred in the prior book. The first involves saving Hedi’s twin brother, Lexi, and the second is damage control with the ruling werewolf council (NAW) after Robson killed its emissaries. This leads to much action and adventure as Hedi must fight, once again, to save those closest to her.

I’m just going to put this out there… The Problem with Promises is heads and tails above the previous two stories. While I enjoyed both books, I had some issues that kept me from elevating the stories to “one of my favorites.” Things such as rambling monologues, confusing storylines, and (my biggest beef) too many problems for Hedi, weighed down the prior books. However, this time around I found the storyline to be sharp, well-focused and engrossing. Each of the main characters underwent substantial growth, leaving this reader emotionally tied to and invested in each one’s fate. I throughly enjoyed reading this tale and look forward to more.

Hedi Peacock has become one of my favorite UF heroines. I admire that she’s no where near perfect, with her insecurities close to the surface at all times. One of the things that I find so fascinating is that Hedi experiences her fae and wolf sides as two distinct beings within her, with one or the other surfacing (or retreating) when it is needed most. I love that Hedi is finally coming to terms with both sides of her heritage, and there are several scenes that showcase both sides developing in ways beyond my hopes for her character. Hedi comes a long way during the course of this book, which is why I adore her so much. She struggles, but is learning to stand up for herself, doing the right thing even when it’s hard.

Much of the same can be said about Robson. In the previous book, he was full of anger and rage. He claimed to love Hedi, but I felt it was more because he was supposed to, rather than truth. The chip on his shoulder interfered with his ability to grow much beyond what misconceptions others had of him. Yet this time around his actions are sincere, and I found him utterly swoon-worthy. He is protective, but respectful. It seems like he’s forgiven Hedi and genuinely loves her. As a couple, Hedi and Robson really started to click, and together they simply sizzled.

There are a few highly emotional scenes towards the climax of the book, each superbly written and deeply gratifying. Supporting characters, such as ex-drag queen Cordelia and inner-circle wolf Biggs, enrich the story with both their strength and flaws. And each character afforded Hedi the opportunity to grow and shine. I will admit, I shed a tear or two during these scenes.

My only real issue was that once again, I found myself confused at times. For better or worse, the author writes her stories with little regard to keeping readers in the loop, especially of past actions. If you haven’t read the prior books, you may be lost; I have read them and still had trouble at times recalling who someone was or what they did. Generally, this works in the story, but SO MUCH goes on, that more reminders of previous events would have been helpful. However, with that said, by about the midway point of the book, it really didn’t matter. And I was so engrossed, that if there was a little question, I easily ignored it and continued consuming the story.

The Problem with Promises is a wonderful addition to Ms. Evan’s highly original Mystwalker series, and I found it far and away my favorite thus far. Overall, the story has great balance between light and dark, action and romance, happy and sad. It is emotionally rich and well developed, with deeply meaningful personal connections between the characters. I found the ending perfect, and the emotional intensity of several scenes satisfying beyond expectation. If you haven’t already, I encourage you to pick up the first book and start reading the Mystwalker series.

Rating:  A- Enjoyed It A Lot

NEVER MAKE A PROMISE…
Robson Trowbridge, the Alpha of Creemore and my gorgeous mate, tries to protect me, Hedi Peacock, half-fae, half-were, from all the trouble I get into. The thing is, my past is pretty messy and bad guys keep knocking down my door. Witches, thug bikers, the North American Council of Weres, dark magic fae, and even an evil wizard are all after me. The Old Mage is the only one I really care about: He has my dear twin brother captive on the other side of the Gates of Merenwyn—not cool. So my alpha love is helping me to keep my promise to free my brother…

YOU CAN’T AFFORD TO KEEP.
Unfortunately, everyone who helps me ends up in a heap of trouble too—including my Trowbridge. How much longer he’ll be mine? Who can say. Now, I admit I’ve had my moments as a shivering coward, hoping he will come to my brave rescue. The whole Prince Charming thing is hard to shake. But these bad guys after me mean business. You know that ‘last straw’ metaphor? That was two straws ago. It’s now or never. Again…

12 responses to “Review: The Problem with Promises by Leigh Evans”