Treasured Pearls, Past and Present

A short while ago, I endured an hour at the public library with a pack of cub scouts.  At eight and nine years old, their world is electronic.  There is almost no debate between e-books and books of paper and glue, electronics will always win.  It’s their most comfortable medium having had computer and smartphone access their entire lives.  I wasn’t surprised when despite recommendations from the National Association of Pediatric Doctors to not allow any television before age two, Fisher-Price designed a baby seat that holds a tablet for baby’s viewing pleasure.  Before these scouts are even a decade old, BiblioTech, the nation’s first all digital, bookless library has already opened its doors in San Antonia, Texas.

I worried for the sake of the quiet, elderly librarian who was in charge of instructing and entertaining our boys when we came in out of the Ohio winter night and into the large brick and glass county library.  I was worried the boys wouldn’t understand what made this place special.  Indeed, the most excited the boys got during the entire tour was not over the stacks of books, but over the book return shoot.  They tried to put their handbooks up into the shoot and pretend someone had dropped them down.  The knowing librarian had them go outside and put books through the shoot while others waited inside.  Then they would switch positions.  They probably could have spent the entire hour doing this.  While it pleased me that these boys could still be boys, interested in something supremely not electronic, it still wasn’t about the actual books.

They were very excited to learn about Lego Saturdays, where the library brings out bins and bins of Legos for anyone who comes to sit and build and be creative.  Who knows, they might bump into a book they want to take home while they’re there, right?  When we got to the long bank of computers, our librarian tried to educate them on homework helps, catalog searches, how to put a hold on a book, and so forth, but this was stuff for the babies in the tablet seats.  Without prompt or permission, every single scout had opened a second and third tab and was involved in a video game before five minutes had passed, easily flipping back and forth to the card catalog so they could answer questions posed.  It never occurred to them to be on a single page at a time, focused on one thing.

One of the boys has oppositional defiance disorder and he was the one I was worried the most about as we began our public adventure.  He often disconnected from the group, didn’t want to follow directions, and made the librarian’s job more difficult that it might otherwise have been, but interestingly, he was the one boy who asked over and over if he could check out a book.  A real book, with pictures.  As a lover of paper books, he made me wonder what the future of books will look like.  I don’t fear a Fahrenheit 451 meltdown, but I do worry about the little pearls that would be/will be lost in an electronic future.

One of my favorite book stores is Half-Price Books where used books go to find new homes.  It’s like a treasure hunt every time I go in there because they keep no formal inventory.  There’s no database to look up a title.  You have to go in person and search the shelves.  These are pearls that would be lost in an electronic future.  Think of the titles discovered because I liked the picture on the cover of a book I’ve never heard of and that no one ever recommended to me.  I found Gregory Frost’s Shadow Bridge and N.K. Jemisin’s Inheritance Trilogy this way.  At half price, I can afford an impulse book purchase.  I love Virginia Wolf’s vivid quote on second hand books: I can count at least sixteen best friends who I bonded with over a book.  That’s sixteen more pearls I would have lost.

Perhaps truest of the definition of lost pearls are bookmarks.  When you read an electronic book, you don’t need bookmarks.  Bookmarks, however, say a great deal about the individual reader.  Next to That’s What I’m Talking About, my favorite blog is http://www.forgottenbookmarks.com.  It is the daily findings of a used and rare bookseller.  He’s published an entire book about the bookmarks that arrive in his shop with the donated books.

It’s happened to all of us: we’re reading a book, something interrupts us, and we grab the closest thing at hand to mark our spot. It could be a train ticket, a letter, an advertisement, a photograph, or a four-leaf clover. Eventually the book finds its way into the world-a library, a flea market, other people’s bookshelves, or to a used bookstore. But what becomes of those forgotten bookmarks? What stories could they tell?

By day, Michael Popek works in his family’s used bookstore. By night, he’s the voyeuristic force behind www.forgottenbookmarks.com, where he shares the weird objects he has found among the stacks at his store.

Forgotten Bookmarks is a scrapbook of Popek’s most interesting finds. Sure, there are actual bookmarks, but there are also pictures and ticket stubs, old recipes and notes, valentines, unsent letters, four-leaf clovers, and various sordid, heartbreaking, and bizarre keepsakes. Together this collection of lost treasures offers a glimpse into other readers’ lives that they never intended for us to see.

What pearls those are!  Like the invitation to a 25th wedding anniversary party from 1880 (Click photos to enlarge image) 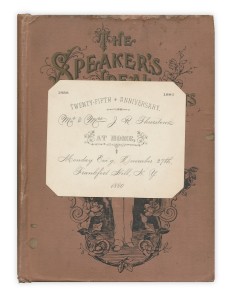 Or the unused ticket to a Yankees game from 2003 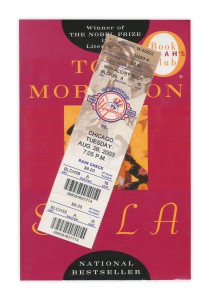 I want to know, why the ticket wasn’t used?  I can create a whole story in my head around just that ticket.  Pearls lost.  Popek has even published a second book titled Handwritten Recipes for all the bookmarks that were recipe cards. 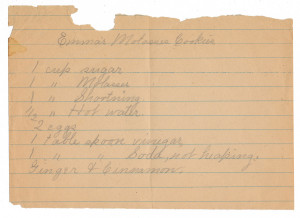 Don’t you want to know who Emma is?  Or why her recipe ended up in a copy of Pierce Gage and His Descendants, compiled and published by George Gage, 1894?

These little pearls are bits of literary archeology.  I think there’s value in the tangibility of the paper and Emma’s handwriting.  That handwriting somehow makes Emma real, more real than the recipe itself.  I don’t want to burden my descendants with clutter, but I suppose, I want to pass some of my pearls along to future generations and have them received like the treasures they’ve been to me. Most of them are or are found in books.

So what about you? Do you have a forgotten bookmark or treasured pearl you would like to share?

Thanks for checking out the new stuff and stopping by to chat!

One response to “Saturday Conversations: Treasured Pearls by Nima”