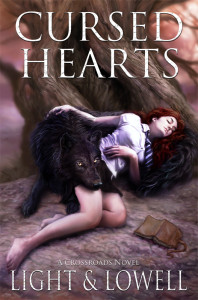 “You know a lot about all of this stuff, don’t you?  I don’t know if I said this already, but thank you.  I’d be more than a little lost without you.  Without your help, I mean,” he corrected.

“You’re welcome,” she smiled.  “Most people find it annoying that I’m a bit of a know-it-all.”  Ariahna shrugged like it didn’t bother her.

“Well, I’ve been called a box of questions on more than one occasion,” Rome laughed, standing up and placing his hand back in hers.  “Speaking of questions… what’s The Grove?”

Before Aria had a chance to answer, she was startled by an old man she’d never seen before.  He was just suddenly standing at her side, and it wasn’t until then that she realized the group had moved on without them.  He had dark, heavily set eyes that seemed to have sunken into his face with age, and several discolored patches marred his skin.  There was something particularly eerie about him that she couldn’t explain.

“The Grove,” the man said roughly, “was a sacred place created by the family of the Artisan.  They brought trees from all four corners of the world to bloom and flower into what some would come to call the perfect garden.  It was a place for gatherings, for great spells and rites to be performed; a place to celebrate life, and mourn the loss of the dead.  Magic lived in the very air, in the earth.  Stepping into The Grove was to be saturated in purity, wrapped up in magic and held safe,” he whispered, clenching bony fingers close to his chest.  “It was an Eden.”

Aria had grown up learning about The Grove; she’d like to have thought that she knew most all there was to know about it.  But the way this man was speaking… There was something in his tone, a certain wistfulness in his eyes.  He spoke not as if he was reciting something out of a book, but as if he were seeing it.  It was as though he was recalling a treasured old memory.  Everything about him, from his hollow cheeks to his wild silver hair was filling her with dread.  Rome’s thumb brushed soothingly over the back of her palm, and she noticed the man staring at that.

“We should probably go catch up with our group…”

“You talk about this place as if it’s gone,” Rome said.

“It was destroyed,” the man groaned.

“The tree at the center of The Grove died off, actually,” she said.

“Is that the story now days?  More’s the pity.  The yew tree did not merely die.  It was poisoned,” he hissed, his voice heavy like the weight of a stone.  “With the heart gone, The Grove could not live.  The rest of the trees, they withered and died around it.”

“I’ve never read anywhere that it was poisoned,” she said skeptically.

“I suppose you don’t know the legend of the six wands then, either?” he whispered, a thin smile playing at the curve of his lips.  “The Artisan crafted the wands from those ancient, sacred trees as a show of goodwill to the five oldest, most influential magical families.  The sixth… the sixth was gifted to a woman whom he loved.”

Ariahna was gripping Rome’s hand so tightly her fingers hurt, almost pressing herself into his side.  Other than the bit about the sixth wand being intended for a lover, she had known all of that.  The way he told it made it sound more like the beginnings of a ghost story than a lesson in history, though.

“Go on,” Rome said, catching Christian’s scent in the air a second later.  It occurred to him then that he hadn’t smelled this guy before he appeared; he hadn’t even heard him walk up.

“The wands, though presented as tribute, had in truth been cursed.  Each held its own misfortune to be inherited by the five families.  And to the woman who had wronged him, he sent a bitter curse of revenge; that neither she, nor her descendants, would ever again find love.”

“But why would he curse them?” Aria asked.

“Navarro,” he said distantly.  “It was Navarro who stole away his love.  He had wealth, and power, and she was drawn to them both.  He captured her heart and blackened the Artisan’s.  Her leaving him left him bitter.  Not long after, the head of the VayRenn household came to him requesting a powerful wand crafted from the trees of The Grove.  He demanded a wand made largely of yew.  So arrogant was he that he believed him and his family alone was deserving of possessing a piece of the yew.  But the Artisan would not sacrifice the sanctity of the garden to satisfy one man’s wishes.  He turned him away, insisting the tree was too significant to risk.  VayRenn, displeased with his decision, acted impulsively, and without regard for consequence.  He poisoned the yew with magic, killed it from within, and then was even so bold as to proclaim to the Artisan that with it no longer living, he had nothing left to protect.  He thought to have won, to have taught the humble Grove keeper a lesson.  The lesson, he would discover, was one that was meant for him.”

Ariahna couldn’t listen to any more of this.

“Are you implying that my family killed The Grove?  That’s ridiculous.  And if that were the case, then why would the Artisan have done as he wished?  I know for a fact that there is yew in that wand.”

“Yes,” the man confirmed, nodding.  “Two pieces of yew went into the wand – representations of the curse he laid upon it.  Do you know what they say of the yew?” he breathed.  “It is the sustainer of life, purveyor of death.  Bringing both beginnings and ends, it is a tree of completion.

“Navarro and VayRenn,” he commiserated.  “To them he bestowed the harshest of curses.  The two lines were bound by dark magics, destined to fall in love, and fated for it to end in tragedy.  They were doomed to fail from the moment they met.  Nothing but catastrophe awaited them.  And yet, they would forever fall in love.  They would struggle, and suffer, and then,” he whispered, “…death.”

“Their love, a cursed love, would always end.  As it is told, the VayRenn’s have been watching the descendants of the Navarro bloodline die for centuries as punishment.  They will forever have something precious stolen from them, just as they took what was most precious form the Artisan – just as they took what was most precious from the whole of the world.  For the yew was not just a tree, it was hope.  It was a beacon of light bathing the land in promise.  And when that light went out – well… that is when the darkness came rushing in.”