Welcome to the Ball & Chain virtual tour! If you’re following along, you’ll be able to win yourself some goodies that might just save your life! I’ve got five Survival Kits in a Sardine Can, perfect for traveling and hiking or taking with you to remote island weddings where people might be dying. And I’ve got five sets of trading cards with original artwork and character work-ups for the less adventurous readers! 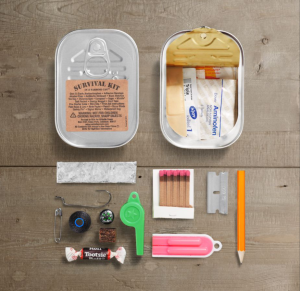 Every comment on this blog tour enters you in a drawing to win one of five Survival Kits in a Sardine Can or one of five sets of trading cards with original artwork. Entries close at midnight, Eastern Time, on April 1, and winners will be announced on April 3rd. Contest is valid worldwide.

The biggest misconception I’ve encountered has been that women can’t write gay fiction, or fiction at all. ‘How can a woman write about gay men if she’s never experienced that life?’ Well, the same way we write about killing people or piloting spaceships, I guess. The worst comment I ever received was, ‘this author writes pretty well . . . for a woman.’ The only way to combat that kind of attitude is to continue writing.

Do you think the increasing number of LGBTQ titles is contributing to a greater understanding and acceptance of varying forms sexuality, in general?

I do think it’s a major contributing factor. When we read, it’s natural to put ourselves into the head of the character, to experience what they are, to think how they’re thinking. We don’t do that with movies or television. Reading is a way for someone to be introduced to a character not as gay or lesbian or trans, but as a person. As a human. And that’s what we need for acceptance more than anything.

Quite a few of your characters’ most wonderfully romantic moments occur when they’re off balance, or out of their comfort zone. Do you think this reflects a sort of universal truth? Or, is it just fun to see how they’ll handle the anxiety? Maybe some of both?

I have to say it’s a little of both. Romantic love is about vulnerability anyway, about letting your guard down and letting someone in who has the power to break your heart. If you have a character who’s guarded against that, the best time to have them let someone in is when they’re too busy guarding against something else, like bullets or knife attacks or falling off a building. 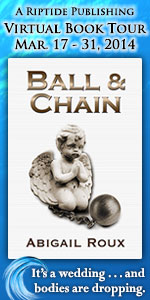 Why is torturing your characters (which I admit I get a kick out of reading) so much fun?

I’ve said over and over, we hurt what we love. And I love Ty, Zane, and Nick to death. Mwuaha!  No, I think it’s about being able to show the true beauty of their character. You put them through hell just to see if they’ll come out of it shinier.

Is there a particular scene, running gag, etc. from your books that usually makes you laugh whenever it’s referenced or turns up in .gifs and such in the fandom?

In the Cut & Run series, readers have picked up on all the things Ty ‘collects’ in the books. There’s a fandom joke that he has a cupboard full of bottle caps no one’s allowed to open because they’ll spill out. Glock, Paper, Scissors also has a pretty big following, it makes me laugh every time. My favorite two running gags, though, will actually present themselves in the Sidewinder Series. ‘It still floats’ in reference to Nick’s boat is one of them.

Which upcoming project are you most excited about?

Has to be Cross & Crown, which is Sidewinder 2. It might be my favorite book I’ve ever written. I’ve also just started the third Sidewinder, which has a title but I’m not telling it yet, and it’s such a different format that I’m excited about it just for that aspect. Also, I sobbed writing the first 500 words, so the prospects for torturing readers are high!

Is there anything in particular you do (a post-writing ritual) to say goodbye to a book you’ve been working on?

It depends on how far over deadline I was, and how much trouble it gave me. When I finished Ball & Chain, I dug out a smuggled Cuban cigar and sat on my front steps smoking it alone. Usually, if I’ve buried myself in the book for so long, I’ll do something like clean out my closet or organize my office, because it’s a safe bet I’ve been sitting and staring at that mess for a month thinking. “As soon as I’m done . . .”

What is your favorite place you’ve traveled to so far in your research? Where would you most like to go?

I want to go everywhere. My favorite place is still New Orleans, although Dublin, and Ireland in general, are a close second.

Do you have any specific heroes whose personalities have worked their way into your characters?

Not intentionally, and none that I can think of right off the top of my head. I do tend to watch actors and pick up on their mannerisms. I steal those traits for characters to make certain they all do something unique just like real people, otherwise you’ll have five characters with the same nervous tic or the same habit of clucking his tongue, etc. But as far as personalities go, I think even if I tried to make a character take on a personality trait I admired, it wouldn’t work because it would be forced.

How did you get into writing? Was there a particular novel or story that inspired you?

I started writing because I was bored in my senior year of college. It’s the most uninspiring story ever. I had senioritis and I had easy courses that I wasn’t really interested in, so I would write stories in class instead of taking notes. The Amelia Peabody series was the first series of books I read and thought, man I bet it would be fun to do that for a living. But I never had aspirations toward being a writer. I never struggled for it, I never submitted manuscripts over and over, I never did anything worth talking about to get published the first time. I work hard at it, and I take it seriously, but I can’t say with all honesty that I had to struggle for it. It’s so depressing to answer this question, because all I can say is I was in the right place, right time, and lucky.

How do you decide where your stories will be set? What aspects of a location do you do the most research on for your stories?

Mostly, the location has to help the story. It has to lend atmosphere, it has to lend clues, it has to lend something worth writing about, or else you don’t have to name the location at all. If there’s not something special about it, then it can be anywhere. I try to travel to every location I write about, and the things that stand out most when I’m there, be it the people or the scenery or the feel of the place, that’s what I use.

I know you’ve talked about having at least one other series/story in the works. Do you have ideas for more, as well? Any hints as to what they might be?

The only other series I’ve got working is the Sidewinder Series. Series books are just as much about the characters as the idea behind them. You have to have solid ground for both, and while I do have a few sets of characters who are solid enough to carry a series, I don’t have the plots to go with them right now. I never say no, though. Never say never. 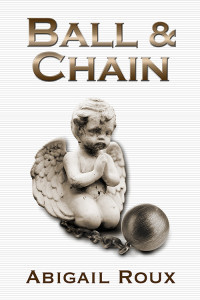 Home from their unexpected deployment, the former members of Marine Force Recon team Sidewinder rejoin their loved ones and try to pick up the pieces of the lives they were forced to leave behind. Ty Grady comes home to Zane Garrett, only to find that everything around him has changed—even the men he went to war with. He barely has time to adjust before his brother, Deuce, asks Ty to be his best man. But that isn’t all Deuce asks Ty to do, and Ty must call for backup to deal with the business issues of Deuce’s future father-in-law.

Nick O’Flaherty and Kelly Abbott join Ty and Zane at the wedding on an island in Scotland, thinking they’re there to assuage Deuce’s paranoia. But when bodies start dropping and boats start sinking, the four men get more involved with the festivities than they’d ever planned to.

With the clock ticking and the killer just as stuck on the isolated island as they are, Ty and Zane must navigate a veritable minefield of family, friends, and foes to stop the whole island from being destroyed.

You can pre-order Ball & Chain from Riptide and get it two days early!