Today we have the wonderful Ms. Devon Monk here at That’s What I’m Talking About. She’s here to share a little bit about upcoming release, Stone Cold, and the Broken Magic series. Plus, we have a GIVEAWAY! Keep reading!

Your current series, the Broken Magic series, is a spin off from your wonderful and wildly successful Allie Beckstrom series. What inspired you to write this spinoff? How did you decide when to end one and begin the next? How did you decide which characters to bring forward into the new series?

I’d had a couple readers ask me if I was going to do a spin off with Shame Flynn as the lead character. While I thought that was a fun idea, I knew just how dark the path that Shame, being the most powerful Death magic user in town, was going to walk and I wasn’t sure how to approach his story. Then one reader asked one question that set off an “ah-ha!” moment in my mind. The plot for book one, HELL BENT, rolled out in my brain and the book began.

The rest of the characters, both new and returning, fell into place as the story demanded.

Your books, and especially the current series, discuss the concept of magical soul complements – two people capable of breaking the rules of magic to bend it to their own will. With Shamus’s death magic and Terric’s life magic, the pair make a seemingly complicated soul complement duo, creating tension between Shamus and Terric. How did the concept of soul complements come about? How did the complication of two men being soul complements (when it seems they are all tending to be male/female pairs) come to mind?  Will Shamus and Terric ever find some peace and possible happiness and is there hope that they can find something to help more permanently counteract their powerful magic that seems to be slowly killing them?

The idea of two people being able to break or change the rules of magic came very early on in the Allie Beckstrom series.  I don’t think Soul Complements always have to be male and female, but Soul Complements are always compatible and due to how close they are, usually fall in love.

I honestly didn’t know Terric was going to be a part of the Allie Beckstrom books until when we see Shame, in a slight panic, beg his mother not to bring Terric in to work magic with him. That got me wondering who Terric was and why Shame was so worried about him being around. Once I realized Terric and Shame had history and that they were Soul Complements, I (of course!) brought Terric into the books so he and Shame could hassle out where they stood with each other and magic.

As for the last part of your question, I think that will be answered by the end of Stone Cold. 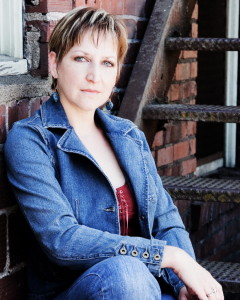 What aspects of real life do you bring to your urban fantasy world? What is something from the Broken Magic world you would enjoy seeing incorporated into real life?

I am a big fan of putting as much real world as possible in urban fantasy, and especially keeping the character’s reactions to the world around them as real as I can. I do love shading the gray between what we know is real and what we know isn’t, but I strive to keep people’s responses and actions true to how any of us might deal with the situation if we were confronted by it.

As for putting something from Broken Magic into real life, I have two choices.  I’d love to have a  magic-fueled gargoyle as a buddy. I’d also love it if there was a physical magic in the real world that could be used to speed healing.

Can you share with us your plans for Shamus, Terric, and the Broken Magic series? Do you have a set number of books planned? Will readers continue to see not just main players from the Allie Beckstrom series but some of the other supporting characters?

Right now there are just two books planned in the Broken Magic series. There are plenty of stories I could write in Shame and Terric’s past and future, but as of this moment, I don’t have any set plans.

Other than your urban fantasy work, you also write the Age of Steam, a steampunk series. Do you prefer to write one genre over another? What is your favorite genre to read for pleasure?

I love both genres equally.

My favorite genre to read is anything with awesome characters doing awesome things in a well-realized world. Throw in an element of the fantastic, and I’m a very happy girl!

Thank you for having me here.  It’s been a pleasure! 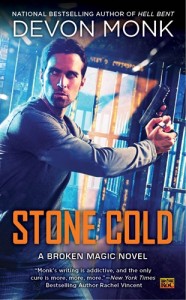 Marked by Life and Death magic, Shame Flynn and Terric Conley are “breakers”—those who can use magic to its full extent. Most of the time, they can barely stand each other, but they know they have to work together to defeat a common enemy—rogue magic user Eli Collins.

Backed by the government, Eli is trying to use magic as a weapon by carving spells into the flesh of innocents and turning them into brainless walking bombs. To stop him, Shame and Terric will need to call on their magic, even as it threatens to consume them—because the price they must pay to wield Life and Death could change the very fate of the world… and magic itself.

ROC publishing is generously donating one (1) copy of Cold Stone to giveaway to one (1) lucky commenter. To enter, please fill out the Rafflecopter form AND leave a comment at the end of this post answering telling us: What “magic power” would you like to wield? The giveaway is open during the time specified on the Rafflecopter form. Winner chosen at random from all eligible entries. This contest is open to US mailing addresses only, where not prohibited by law. Open to participants, 18 years or older, who are legally allowed to participate in such a contest as allowed by their local laws. All federal, state, local, and municipal laws and regulations apply. Void where prohibited. No purchase necessary. By participating in the contest, participants agree to be bound by the decisions of the contest sponsor. Prize will be delivered by the author. I am not responsible for items lost in the mail. By entering this giveaway, participants agree to abide by these terms.

Devon Monk has one husband, two sons, and a dog named Mojo. She lives in Oregon and is surrounded by numerous family members who mostly live within dinner-calling distance of each other. She writes the Allie Beckstrom urban fantasy series and the Age of Steam steampunk series. Her collection of short stories, A CUP OF NORMAL is a finalist for the Mythopoeic and Endeavour Awards. When not writing, Devon drinks coffee and knits strange things.