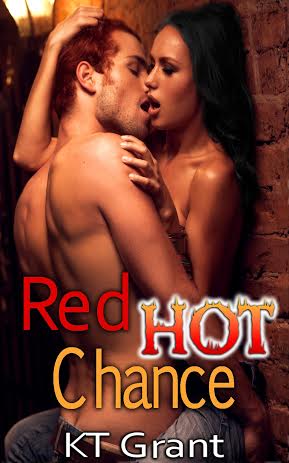 Brian “Woody” Woodall has taken a leave of absence from his dream job on Grand Turk to return to Las Vegas, not only to attend his best friend’s engagement party, but to help his sick father he has never gotten along with. Quinn also needs a big favor and asks Woody to volunteer as a blind date for his fiancée’s boss, Daphne Vogel. Woody isn’t thrilled by the idea, but after seeing Daphne’s picture, he’s open to the idea of a red hot romance.

Ever since Daphne’s fiancé died six years ago in a car crash, she’s not interested in dating or falling love again. But when her best friend urges her to take the chance, she decides to, although she thinks it’s a big mistake.

The moment Woody and Daphne meet at Quinn’s engagement party, sparks fly. Ashamed by her passionate reaction to Woody’s kisses and skilled caresses, she runs away, but Woody finds out where she lives and confronts her. He comes clean about everything, admitting how much he wants Daphne, preferably naked and screaming his name in pleasure.

Daphne now must decide if she’s open to Woody’s seduction knowing he may leave at any moment and return to his carefree bachelor lifestyle in Grand Turk.

Bracing herself for his questions on why she had left the party without saying goodbye, she peered through the peep hole. She gasped. Woody stood outside her door with a bouquet of yellow roses.

The bell rang again. She took some deep calming breaths then opened the door.

“Hi, beautiful. These are for you.” He held out the flowers.

“We need to talk, and no, I didn’t ask her where you lived. Quinn gave me your address. After you snuck out, I called a cab, and here I am. I stopped at the florist on the corner and bought these flowers for you.”

Her entire body went numb. How in world did he…what the… flowers? “How did Quinn get that private information, and why did he give it to you?”

Woody gripped the stems of the roses. “I was going to tell you before you ran away, but I’m your date for tomorrow night. My real name is Brian Woodall. Everyone calls me Woody because of my last name.”

“And not what’s in your pants?” She lounged against the frame, deciding whether she should shut the door in his face.

He grinned, lifting the flowers to cover his face. “Good one. I guess I should be embarrassed?”

“Once of us should, meaning me.” Her face reddened. “I’ve never hooked up with a strange man before. This is a first for me.”

“I wish I could say it’s a first for me also, but I’ve never lied to a woman and I’m not going to start now. Oh, before I forget, I found your barrette, Cinderella.” He reached in his pocket and held up the hairpiece.

“Ha-ha, Brian,” She grabbed the barrette. When he lowered the flowers, she took them also.

“We really do need to talk. I can explain the whole situation on why I was chosen as your date and where we should take it from here,” he said and stepped forward to enter her condo.

She slapped her palm over Woody’s hard chest. “Now wait a minute. If you think you’re going to come in and—”

“Who’s this?” He bent down and lifted Butterscotch, who purred and rubbed her face against his cheek.

She was speechless. It grew even weirder when the cat licked his face. He laughed and cradled his new furry friend then stroked her head and back.

“Butterscotch doesn’t let anyone touch her except me. Even when Kent comes over, she hisses at him and hides under the couch until he leaves.”

His entire face brightened. “It’s a sign then. If your adorable kitty likes me, that must mean I’m a good guy. I bet she’d like to know me better. In order to do that, her beautiful owner should let me come in for dinner.”

“Dinner? You expect me to cook?” She rolled her eyes at his audacity.

“Now what type of man would I be to expect a woman to cook? I’m thinking take out. I didn’t have time to eat at the party. I assume you didn’t either since you snuck out before dinner. What do you say?” He lifted Butterscotch and kissed her. She purred loudly. “See, Butterscotch is hungry and wants me to stay and play with her.”

He looked too adorable for his own good, holding the yellow-orange cat and sticking out his bottom lip. She shifted back and motioned for him to enter. “You can come in, but I pick the food, and you pay. I also expect you to remain a gentleman the entire time you’re here.”

“I would never do anything inappropriate to this pretty pussy.” He winked and walked inside, petting and whispering to Butterscotch.

She bit down on her tongue to stop from hurling a comeback and shut the door, hoping she didn’t end up kicking herself later on.

KT Grant is a self-proclaimed eccentric redhead who not only loves to read a wide variety of romances, but also loves writing it. Under her alter-ego, she is a well-known book  blogger who doesn’t shy away from voicing her opinion. A proud native of New Jersey, KT is multi-published and writes Gay, Lesbian and Straight romance. KT has been a top ten best-selling author at Amazon, as well as being a multiple All Romance Ebooks best seller and a Night Owl Reviews Top Author Pick.