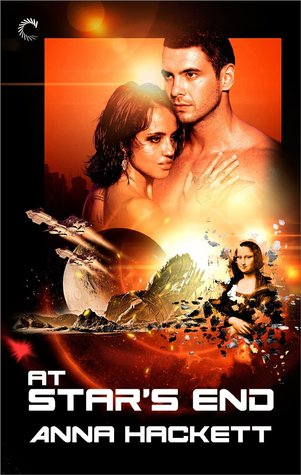 Dr. Eos Rai is chasing after the mythical “Star’s End,” an unknown location where a human expedition supposedly sent many of Earth’s (Terra) artistic treasures as the humans destroyed the planet hundreds of years earlier. It was her mother’s life’s ambition to find Star’s End, and Eos has picked up the cause, much to the dismay of her colleagues at the Galactic Institute for Historical Preservation. Without much hope, Eos turns to the Phoenix Brothers, a trio of known treasure hunters, for help.

The Phoenix Brothers enjoy their carefree life on Khan. They’ve made enemies in their line of work, but they feel their methods are justified since they sell the ancient Earth treasures they uncover to respectable collectors and institutions. Since Eos worked with Niklas Phoenix at the Institute, she trusts him and approaches the brothers with her plans. Yet it is Dathan, who is known for his uncanny ability to sniff out hidden treasures, that draws the attention of Eos.

Author Anna Hackett has created an interesting futuristic society in At Star’s End. Almost one hundred percent of Earth’s records were destroyed in the nuclear devastation of the Great Terran War. Humans have moved on, populating hundreds of other planets. These days, there is a lucrative market for ancient Terran artifacts, creating an immense black market, complete with unsavory characters who will stop at nothing to find a treasure. As the story unfolds, Ms. Hackett allows the reader to experience her world via detailed action scenes such as a fight in a market place and blasting out of a slave auction.

The story behind At Star’s End is enjoyable. Although the sentence structure and text is a bit more on the simplistic side, the story itself is compelling. The attraction between Eos and Dathan is palpable and sensual, but it did take some time for me to completely buy into their relationship. Each has skeletons in his/her past, which causes roadblocks along their journey. While this is to be expected, sometimes I wanted them to just open up about their issues, therefore allowing a deeper connection.

The dynamic between Eos and Dathan is a good one. They start out with preconceived notions about how the other believes and acts. I find that the slow unveiling of who the other “really is” is well-played. I like that Eos has her concerns based on her upbringing of right and wrong, but when it comes down to it, she is willing to look at the larger picture and realize what is truly important. Dathan – well, he was a little bit slower to come around, but he has a good heart and just does what he things is “best.”

One thing that I really liked was how Ms. Hackett handled the conclusion of the story, both with the action and the romance. The search for Star’s End is thrilling and how the team makes sure that any discoveries don’t fall into the wrong hands is smart. I also loved the lessons both Eos and Dathan take away from their experiences – learning that the past can be a barricade to true happiness.

Overall, At Star’s End is an entertaining story. The flow of both the treasure hunting plot and the romance is fairly smooth, with a few bumps in the road, but nothing our heroes can’t overcome. The story felt simple, yet not simplistic. I found that once I started it, I didn’t want to put it down – wondering if/when the treasure hunters would find Star’s End. I liked the dynamics of the brothers – I can only imagine their eventual stories, most especially Nik… *evil grin* At Star’s End is a light, yet exciting and fun read.

Rating:  B, Liked It – Recommend

Dr. Eos Rai has spent a lifetime dedicated to her mother’s dream of finding the long-lost Mona Lisa. When Eos uncovers tantalizing evidence of Star’s End–the last known location of the masterpiece–she’s shocked when her employer, the Galactic Institute of Historic Preservation, refuses to back her expedition. Left with no choice, Eos must trust the most notorious treasure hunter in the galaxy, a man she finds infuriating, annoying and far too tempting.

Dathan Phoenix can sniff out relics at a stellar mile. With his brothers by his side, he takes the adventures that suit him and refuses to become a lazy, bitter failure like their father. When the gorgeous Eos Rai comes looking to hire him, he knows she’s trouble, but he’s lured into a hunt that turns into a wild and dangerous adventure. As Eos and Dathan are pushed to their limits, they discover treasure isn’t the only thing they’re drawn to…but how will their desire survive when Dathan demands the Mona Lisa as his payment?

4 responses to “Review: At Star’s End by Anna Hackett”