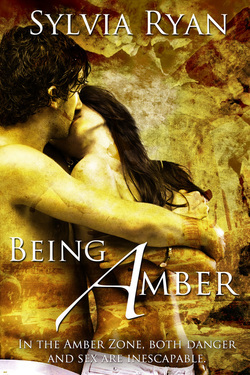 Ohmygosh! Everything makes SO much more sense now! I read and reviewed Being Sapphire earlier in the year. The second title of the New Atlanta series was an excellent read. Now, everything makes so much more sense! If you’re able, start this series with book 1, Being Amber. If you can’t get your hands on it, don’t worry. You’ll catch up quickly, as I did, once you’re able to read the book that started it all.

Fabulous world-building and phenomenal characters make Sylvia Ryan’s Being Amber a poignant yet sensual commentary of society and government. Relationship-building is of primary importance in the Amber Zone. Those that have grown up in this community are comfortable with the open sexuality and closeness of the inhabitants of Circle City. Those new – transplanted from one of the other zones because they failed an assessment of one sort or another – are unused to the physical contact and the ability to express their own ideas and sensuality in an unrestricted way. Jaci is one of those people.

Relocated from the Sapphire Zone due to a genetic marker indicating she would potentially pass along a medical illness, she was sterilized and thrust into a whole new world (and not in the Jasmine/Aladdin way), without even a whisper of what was happening. No clue she would be whisked away from the family and friends she knew and loved. Relocated into Xander’s care.

While Jaci had no clue what the whole deal was with Circle City, she did think she was falling for Xander – assigned to protect her on a task force to capture the person(s) murdering “fallows” – those sterilized when they come to Amber. In addition to being her roommate and built-in family for the rest of her life. I like the concept here. They’re plopped into a new setting with a built-in family. You don’t always like your family, but they’re there to love and protect you. No matter what.

Everything blows up in Xander’s face. He meant to protect Jaci by not telling her about the surveillance. But she found out in a totally not cool way. I would have been furious, too.

The way that Xander cares for Jaci is…breathtaking. I can relate it to certain aspects of my own life. It’s real, and it has the potential to resonate with readers. Jaci’s feelings in the story are raw and powerful. Her vulnerability, at times, is paired with an exquisite power that she gains from the realization that she doesn’t have to be a victim any longer. I loved it when Jaci found her power. I loved the relationship between Xander and Jaci. My heart broke for Rock.

I understand so much more about New Atlanta now! This is a fabulous title to read – there’s not much more I can discuss without becoming spoiler-y.  I highly recommend that readers start the series with book 1, Being Amber. Having read Being Sapphire, I am immensely looking forward to Being Emerald, Rock’s story, that’s set to release in August 2014. Readers need to be sure to check out Ms. Ryan’s website for epilogues for both published stories. And take the tissues.

Jaci Harmon was born a Sapphire, but after she’s summoned to receive her final designation, the testing reveals she carries a gene slated for eradication. Within a day, she’s sterilized and dumped in the Amber Zone, where the damaged are corralled away from the rest of New Atlanta. Scared and alone, Jaci would rather die than face her future as an Amber.

Born in the Amber Zone, Xander Dimos is a product of a lifetime spent under the oppression of the Repopulation Laws. Decades of suffering have taught the Ambers to make the zone a place where touch, sex, and unconditional acceptance ease the pain of their fate. Jaci has a lot to learn about her new home, and it’s Xanderís responsibility to guide her through the differences and the dangers safely.

With the simmering undercurrents of sexual chemistry growing between them, and in the midst of discovering the Gov’s true motives, Jaci and Xander must overcome his secret and accept their love as undeniable…even if the time allotted to share it is short.

Reviews in the Series:
Being Sapphire by Sylvia Ryan (New Atlanta #2)

Ms. Ryan is generously donating one (1) digital copy of Being Amber to give to one (1) lucky commenter. To enter, please fill out the Rafflecopter form AND leave a comment at the end of this post sharing your favorite sci-fi book or movie. The giveaway is open during the time specified on the Rafflecopter form. Winner(s) chosen at random from all eligible entries. This contest is open internationally where not prohibited by law. Open to participants, 18 years or older, who are legally allowed to participate in such a contest as allowed by their local laws. All federal, state, local, and municipal laws and regulations apply. Void where prohibited. No purchase necessary. By participating in the contest, participants agree to be bound by the decisions of the contest sponsor. Prize will be delivered by the author. I am not responsible for items lost in the mail. By entering this giveaway, participants agree to abide by these terms.

4 responses to “Review & Giveaway: Being Amber by Sylvia Ryan”