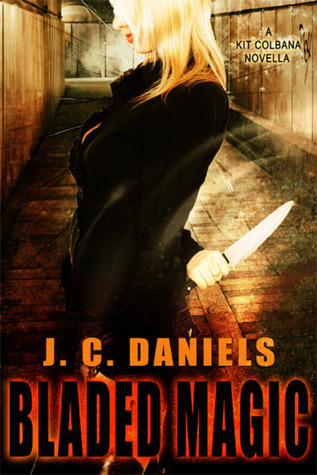 Bladed Magic is a short novella that takes place a “few years ago,” just after Kit leaves her family and is living with her friend/guardian, TJ. The story opens with Kit overhearing a fight near TJ’s, and she jumps in to save the one human who is being beaten up by three werewolves. Once the fight is over, Kit discovers that the man is actually a witch named Justin. This is the story of how Justin and Kit first meet, and as a fan of the Colbana Files series, I enjoyed getting to know Kit before she becomes the kick-ass heroine of “present day.”

Since I have read the three books in the Colbana Files series, my review will be skewed with the knowledge of what becomes of Kit and Justin. I got a thrill from seeing how the friends first meet, experiencing their early banter and sparks of romance, even their first kiss! But I feel that I wouldn’t have been ready for this story until after reading the third book, Broken Blade (or before the second book – just not in between the second and third books because of where Kit is emotionally and mentally after the end of Night Blade). I also don’t think that I would recommend readers new to the series to start with Bladed Magic, since a new reader isn’t privy to what becomes of the individuals or the pair. I feel that having this knowledge makes the novella more fun to read.

One thing that I really adored is reading how Kit’s instincts work. Per usual, the author takes the reader deep inside Kit’s thought process, and we witness how she begins to trust her inner voice. I find it exceptionally interesting because in the books of the series, Kit’s reactions and actions are so second nature for her that there is no “thinking it out.” In Bladed Magic, we see how Kit leans to use and embrace her gut feelings.

I also enjoyed learning just how naive Kit is when she first escapes her family. She really knows nothing of the shifter world, and has to learn lessons the hard way at times. Kit also learns that to survive in the paranormal world, she has to be prepared to kill, something she wants to avoid altogether.

Unfortunately, because this is a novella-length story, there isn’t enough room for longer “flashbacks,” and I found myself a bit confused at times. I didn’t care for the “remember the time…” sequences which were used to provide some background information. However, they are limited in scope, and at times I felt like I’d forgotten some key information and didn’t know enough to keep up. Like I’m missing out on a secret or inside information.

Overall, the story is good, and it reads fast. I don’t know that I would recommend to people who haven’t read the series, even though it is a prequel. I feel that the shortness of the story doesn’t give new readers the background needed to enjoy the characters. And, with Kit’s brain full of memories, it may even be confusing. But for fans of the series, it is a entertaining and exciting glimpse into her past, giving the reader an idea of how she becomes the heroine we adore.

Rating:  B-  Liked It, but I had a few small issues

For the first time in her life, Kit Colbana’s life was going just fine. She had a nice, easy job. She’d managed to escape the not-so-loving attentions of a family who’d rather see her dead than look at her. She had a roof over her head and she didn’t have to fight for every little thing she had.

Then she finds herself tangled up with a green-eyed witch by the name of Justin. He’s looking for somebody and for some bizarre reason, he seems to think she can help. All she has to do is say no, and she can go back to her safe little existence. That’s exactly what she needs to do and she knows it.

Too bad she’s not very good at following her own advice.

The events of this short story take place between A STROKE OF DUMB LUCK and BLADE SONG. It can be read as a stand-alone.