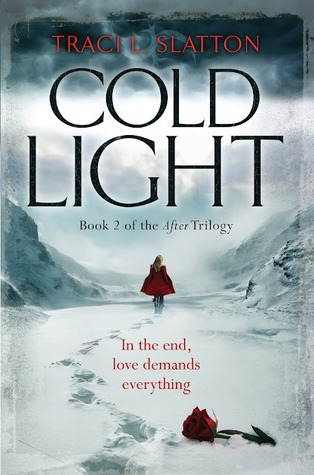 Cold Light is sequel to Fallen, following Emma in a post-apocalyptic world.  We find Emma sometime after the ending of Fallen, living unhappily in Canada with her husband.  When her oldest daughter is captured, Emma is the only one who can retrieve her.

Firstly, Gikany and Una like this world: we find the mythology vastly interesting.  The mists – how they were created, how they turned and how they are evolving is fascinating to our sci-fi minds.  It seems even people are evolving as well – which all makes sense.

However, we think there are still some stagnant aspects. The lack of communication between Emma and everyone is the biggest one.  Considering her experiences in Fallen, you would think she would have learned to work within a team.  We understand her need to protect others, but taking it to the extreme of placing her own life, and consequently her daughter, in jeopardy is absurd!  We understand the nature of Arthur and with his personality we can sympathize with why he keeps things to close to himself.  But Emma is not Arthur and her experiences should have taught her that in this new world, a lone ranger CANNOT survive.

We also thought there were too many parallels between Cold Light and Fallen.  In some ways it was a rewriting of Fallen with a change of geography.  Emma’s internal monologue helps to understand her rationalizations.  However, we expected more growth from her.  She is a pretty smart cookie, why is it that she does not learn from her mistakes?  Without giving everything away, we understand her reason for making the choice she does at the end of Cold Light.  However, she goes off, choice made, alone…again.  Considering the state of the world, the dangers of raiders, the mist and everything else…WHY on earth did she leave on her own?  It seemed like such a brainless thing to do instead of making her choice and having the “posse” assist her in reaching her destination.

One truly bright positive in Cold Light is the supporting characters.  They round out the novel, giving us humor, humanity and hope.  We love the people Emma finds to surround herself with.  The only exception being Haywood – we do not understand their relationship.  The world has changed, maybe he is no longer who he used to be either, but Haywood just does not strike us as a “good” guy.

With all this said, the plot thickens in this world.  We do want to read Far Shore, which is out and on our Kindles.  We are not sure what to expect, but we hope there are answers to some of the questions we are left with at the closing of Cold Light.  Obviously the writing is compelling if we can be angry and arguing about fictitious people and their choices.  So if Cold Light sounds interesting to you, pick up Fallen and start the journey.

Rating:  C+ Liked It – But we had issues

The end of the world brings chaos, madness, and psychic powers. For Emma and Arthur, separated by an ocean, it brings a love that demands everything. Emma’s beloved daughter is kidnapped by vengeful raiders, and Emma embarks on a soul-crushing journey to rescue her. When Arthur finds Emma, can she trust him? Against impossible odds, Emma draws near the rogue camp, where she also confronts the deepest choice of her heart…

Reviews in the Series:
Fallen by Traci L. Slatton (After #1)