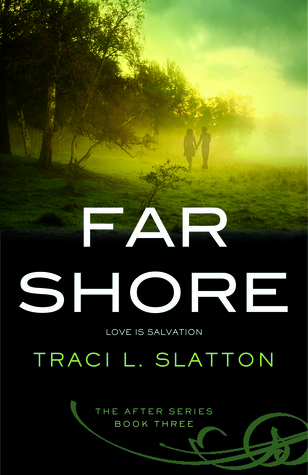 Far Shore was a surprising follow-up to Cold Light.  Gikany and Una liked this third edition in the After series.  For those who have followed our reviews of this series, yes, the After trilogy is now a series, but that is not the only surprise waiting for you in Far Shore.

Please note that due to the nature of this series, there are minor spoilers for the previous novels contained within this review.  You have been warned!

Emma finds herself faced with a bitter choice as Far Shore opens.  After making the choice to stay with Haywood and return to Canada at the conclusion of Cold Light, her friends have sought her out for assistance.  Haywood gives her an ultimatum: stay with him and the children, or go and never see them again.  With the history, love, and connection that Emma and Arthur have, it is not surprising that Emma leaves to help rescue Arthur from Alexei.  We never expected the road that this choice would take Emma, nor how the world would change.

In Far Shore, we truly experience how the world is evolving.  Not only are the Mists changing, but so are the people and their abilities.  We were fascinated by the changes – not just in in the skills and abilities, but in the hearts of some of the characters.  As much as Emma has struggled in the past two novels, it truly hits home in Far Shore.  Her choices lead her to a climactic moment in her personal growth.  We respect and were captivated by what happens after she rescues Arthur.  Emma truly shines as she struggles to make the best of the only choice her heart could have made.  We were humbled and terrified with her.  The despair and desperation she experiences is palpable.  When she was faced with temptation – Gikany and Una were torn apart, hoping she would not give in.  Emma’s endurance kept us glued to the pages as we continued to read in hopes that the tide would turn in her favor.

Although there are some very flagrantly obvious foreshadowing moments, the ending was surprising.  Considering that this series began as a trilogy, to have a cliffhanger ending at the conclusion of the third book was surprising.  However, we can see that maybe there is too much left to try to cram it in.  We have many remaining questions.  We hope that Emma is reunited with her children.  We know Arthur is trying to eradicate the mists – will he succeed?  Will Emma openly and honestly choose between Haywood and Arthur and end the strife?  (We hope she chooses Arthur and regains her children).  Will we be able to understand Haywood (because he seems like an absolute jerk)?  Will we discover why some people are evolving like the mists and others are not?

As you can see, the world of The After series continues to fascinate and enthrall us.  We liked it and eagerly await the next novel in this series.  We must know what happens next!  If you enjoy post-apocalyptic romantic dramas, pick up The After series.

Rating:  B Liked It, recommend

After the mists’ lethal apocalypse, mankind’s only hope for survival lies broken and battered, the prisoner of a ruthless sociopath who will stop at nothing to hurt him. Emma sets out to rescue him. She faces an ultimatum and must relinquish everything she holds dear. As Arthur teeters on the brink of life and death, Emma’s healing ability fails. Her own despair tests her, and she must grow stronger than she ever dreamt possible as she confronts the truth of her own heart.

In a time of apocalyptic despair, love is put to the test…

A mystical odyssey, a haunting love…