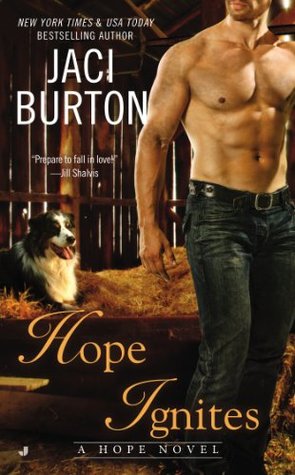 Hope Ignites is the second installment in the Hope Series.  I like small town romances because they are full of unique details and quirky characters that make them relatable and fun.  Like the first story in this series, Hope Flames, the dogs are ever-present players which provide a certain continuity between books.  Main character Logan McCormack’s brother, Luke and his fiancée Emma, from Hope Flames, make appearances and it was good to check-in with them too.

Logan McCormack is not just a country boy and the ranch he runs is not just the family homestead.  It’s a forty-five thousand acre working cattle ranch.  That’s roughly seventy square miles or the whole city of Madison, Wisconsin.  How about the entire country of the Republic of the Marshall Islands?  Logan doesn’t often leave the ranch and as a loner by nature, he likes it that way.  He comes off tall, dark, handsome, and broody.  *swoon*

He does have a soft spot for his housekeeper, a mother figure in his life, who keeps him and the ranch hands fed.  When a movie production company rents out a portion of his land as an alien planet, his housekeeper twists his arm into driving her out to watch the filming.  The star of the sci-fi thriller, Desiree Jenkins, catches his eye.  Desiree is the current A-list “it girl” in Hollywood, a Jennifer Lawrence type, who catches everyone’s eye.  He assumes she is high maintenance and dismisses the impulse to engage her entirely.  He will be happy when both she and the crew are gone. In fact, after watching filming for some time, he criticizes Desiree’s rifle handling skills.

What Logan doesn’t know is that Desiree is tired of the glitz, the glamour, and the pressure of her industry.  She loves the openness of the ranch and its pace.  She also likes Logan.  More to the point, she pursues Logan in a refreshing display of feminine decisiveness.  Knowing that there is an expiration date on this fling, Logan gives into his desires and flames erupt.  Burton excels at flames.

I liked both Logan and Desiree.  I felt they were actually well matched with mature perspectives on love and life.  Occasionally Logan fell back into his broody behavior and failed to communicate well, but Desiree was uncomplicated and straight-forward with hers.  There were plot complications, but not a lot of angst in this story.  I wanted more from it because I liked the characters so much.  I felt Burton could have done more with them.  It could have been a longer story despite the time constraints of the movie shoot.  Lastly, the ending was a little abrupt for the above reason.  Overall, I enjoyed the book, even with a few minor issues.

My Rating:  B, Liked It — Recommend

When a movie crew asks to film on his cattle ranch, Logan McCormack doesn’t expect Desiree Jenkins, the young, sought-after star, to be so open, so down-to-earth, or so intimately interested in him. But the last thing a loner like Logan needs is a distraction like Des, who wouldn’t understand what it’s like to live peacefully off the land.

But it’s Logan who doesn’t understand. What Des wants is an escape from paparazzi and gossip columns, and she’s found it at Logan’s ranch. Now it’s up to her to prove that she’s like any other girl looking to be accepted for who she is. And she’s hoping that it’s by this real-life cowboy who has everything it takes—and more—to give her the kind of happily ever after that can’t be found in the movies