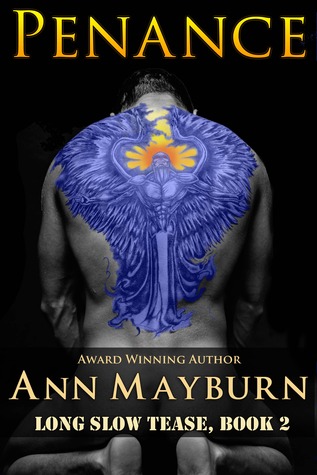 I have been eagerly awaiting Penance since finishing its predecessor, Still, last spring, and I’m happy to say that was everything I’d hoped for and more. Beginning with a heartfelt note from the author about the importance of honesty and self-acceptance, Michelle and Wyatt’s story picks up with a trip back to Michelle’s hometown of Chicago, and a closer look at the history that has shaped her to this point.

Michelle has become an even more complex character in this story, and while I expected there to be some dark days for Michelle and Wyatt, I was unprepared for the extent of Michelle’s issues and the demons she’s been fighting for so long. As a military surgeon, she held lives in her hands, had many people depending on her, and therefore had to be invulnerable under the worst of circumstances. As a Domme, she feels like she has to be perfect in order to be worthy of Wyatt’s love and submission. But, that becomes impossible as she faces not only the unattainable expectations of her mother, but also the relentless guilt she feels over the death of her fiancé and former sub. Her PTSD might not be the same Wyatt’s, but it’s very real, and it’s been destroying her for years. Additionally, unlike others who have achieved various amounts of success with traditional therapies, only one thing has ever worked to give Michelle any kind of peace: penance.

For Wyatt, who is still dealing with his own PTSD, watching his Domina, the woman he loves, fall apart is excruciating. Worse, he has no idea how to help her at first because she’s hidden that part of herself away so thoroughly and for so long. One of my favorite things about Penance is that there’s no magic cure for what ails Michelle and Wyatt. There’s pain, denial, and guilt, but there’s no hero to rush in and make everything okay in an instant. Instead there is acceptance, understanding, and forgiveness, along with lots of love and hope. Wyatt proves beyond any doubt that he is the perfect sub for Michelle, and that he’s strong enough to give her what she needs so that she can be the Mistress he deserves in turn.

Once again, Ms. Mayburn has tackled some very serious issues, and handled them with the honesty and respect they deserve. Combining some of the topics that I care about most, Penance reaffirms that our veterans deserve all the help and understanding we have to give in order to not only cope after they come home, but to live as fully and happily as possible. Mostly, though, Penance is a lesson about being strong, not in ways that will make it easier on those around us, but as a means of acknowledging that perfection is an illusion, and a dangerous one at that. Seeking help is hard, but everyone should be able to ask for it if they need to, without judgment or fear, and know that the world will be a better place when they do.

When Wyatt and Michelle leave for Chicago to attend the wedding of an old friend of Michelle’s, and Wyatt has no idea how close his beloved Domina is to the edge. Michelle has been trying to ignore her own issues, focused on helping Wyatt with his PTSD, but the past refuses to stay buried and she soon finds herself spiraling out of control. More determined than ever to protect Wyatt from herself, Michelle tries to pretend everything is perfect with devastating results.

Wyatt can see that Michelle is losing it, but he doesn’t know how to help her when she refuses to admit there’s a problem. No longer able to deal with the pressure of pretending to be perfect, Michelle self-destructs. Wyatt is now faced with a bitter choice – leave the woman who owns his heart or start a long and arduous journey to rescue the other half of his soul from her own personal Hell.