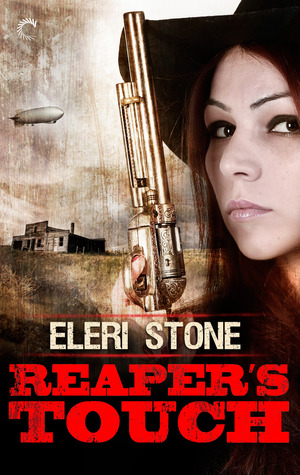 Abby is a Ranger. The star-marked Rangers have a natural immunity to Reaper bites and can even use the Reaper parasite in conjunction with their own DNA to heal. Reapers are former humans who have been infected with a virus that turns them into zombie-like creatures. But Reapers aren’t the monsters portrayed in horror films of past; they can be clever, they are fast, they don’t rot and are quick healing. It is the Ranger’s job to protect the nearby settlements and keep the Reapers at bay.

Abby is a lone female Ranger, and society isn’t always kind to females in this alternate-world wild western. While most believe that female Rangers should be kept safe behind the gates of the fort, producing more Rangers, Abby prefers the front lines. Shunned by her captain and sent as a messenger to keep her from danger, Abby ends up in the midst of an even more hazardous plot. Fate pairs Abby with Jake, a man she describes as, “Her cowboy — dirty and disturbing and hot as hell.” Jake is mysterious and a tad dangerous, but his mission seems to be a noble one, so Abby agrees to help him. Yet the secrets he keeps could end up costing Abby her life.

Reaper’s Touch is something altogether new and exciting. Mostly a paranormal romance, the setting and plot are also part western and part alternate timeline; this book has something for everyone. Even though it is the first story in a new series, the world-building is seamless and gripping. Ms. Stone plunges her readers head-first into her exciting and original new world of Rangers and Reapers. Right from the get go, the reader is brought up to speed on the makings of a Ranger (especially the rare female Ranger) and perils of the Reapers; we learn about society’s upper crust, the Scrapers, and life on the frontier. It is a lot to digest, but the world-building is interesting and canny. I don’t know that I’ve read anything quite like Reaper’s Touch.

The book itself is well-written, and the overall plot engrossing. I felt the tempo Ms. Stone sets is perfect – slow enough to enjoy the intricate details such as moss growing on rocks in the river – creating vivid imagery and polished scenes. But fast enough to keep me engaged and even a little anxious.

I really like Abby. She’s not your typical romance heroine. Described as “not pretty,” she is “one of the guys” and wants to stay that way. I like her sense of responsibility and her unwavering loyalty. She makes up her own mind, regardless of the men around her. I also admire that she won’t let society dictate how she should act and feel, sometimes even going against the popular views to do what she knows to be the right thing.

Jake is equally charming. As advertised, he is dirty and disturbing. Although he moves towards his goals with a single-minded purpose, he takes time to assess each situation and move forward in a manner that isn’t entirely selfish–regardless of how he portrays himself. I’ve never had a “thing” for cowboys, but if they are all as sexy and genuine as Jake, I may have to give the genre a try!

There are several supporting characters that add great value to the overall story. I enjoy that each seems to be upfront about who he is and what his motives are. Abby is surrounded by men who do have her best interests at heart and are willing to share some good advice with their head-strong female counterpart.

I also enjoyed some of the more emotionally rough moments. It is here where the story gains heart and depth. Ms. Stone does an excellent job of implying torture scenes without sharing the gruesome details. At one point, the shared agony of Jake and Abby is abundantly apparent through their actions, inactions, and words. My heart ached for the pair, and the entire scene was well done.

Overall, Reaper’s Touch is a solid story with balanced action, story progression, and character development. Ms. Stone has created an interesting and unique mythology that is an amalgamation of many themes. Although the romance is light on smexy time, I enjoyed Abby and Jake’s journey and the time taken to get to know each other. Their relationship develops over the entire book, and it felt natural. I like that the climatic battle and scenes fit the build-up. Both brute force as well as smarts and clever battle strategy give our heroes their HEA. Yet the author has created a mystery with a few unanswered questions and open ends. I look forward to see where she takes the series next!

Abby is a Ranger, part of an elite group who defend the border against Reapers—humans infected with a parasite that turns them into mindless cannibals. Rangers are immune to Reaper infection, and as one of the only female Rangers, Abby is expected to settle down and breed more Rangers—a fate she’s keen to avoid. When she’s ambushed on the plains, she’s ready to go out with guns blazing—until a mysterious, handsome cowboy rides to her rescue.

Jake has his own motives for helping Abby, beyond aiding a damsel in distress. He’s a Reaper, and while he’s learned to wrest control of his mind from the parasite, the effects won’t last without a permanent cure. And he needs Abby to get it.

Abby and Jake are natural enemies and unlikely partners. But when their search reveals a conspiracy between Reapers and the rich industrialists who own the mountain cities, they must work together to find the cure—or lose the border, and each other, forever.