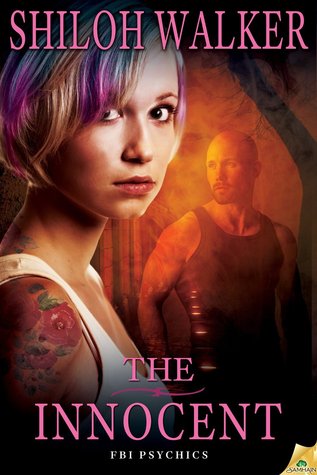 Jay Roberts is a security specialist with ties to Agent Taylor Jones and his group of FBI psychics. Jay has lived a lonely life, never able to touch anyone else because she is psychometric and picks up history and thoughts via touch. Yet she found something special with Lincoln Dawson when they met online. However, about two months ago, Lincoln suddenly and mysteriously cut all ties with Jay.

Lincoln Dawson is a former county sheriff living in Hell, Georgia. His daughter, DeeDee, has been missing for two months, and no one in the god-forsaken place seems to care about DeeDee’s disappearance or any of the other horrible problems which keep happening.

With her gut-instincts telling Jay something more was going on, she decides it is time to find out why Linc left her. However, once she arrives in Hell, she realizes something sinister is hanging over the town and its citizens. Sensing something was going to happen, Jay’s boss Oz, contacts Taige Morgan, a famous psychic that works with Agent Taylor’s group, and sends her to help Jay uncover the truth.

The Innocent is a gripping new suspense novella that takes place in Ms. Walker’s FBI Psychic series. However, one does not need to have read any of the other books to enjoy The Innocent; it is completely stand alone. Although it is a shortened-length story, it is packed with riveting action and suspense. As Jay, Taige and Linc put the puzzle pieces together, I was glued to the pages, trying to figure out what was happening before the characters could uncover the truth.

The story is filled with fabulous, complex characters which add so much to the story. The bad guys are slimy and evil, just the way I like them, and even better, the heroes are jaded and rough. For example, Lincoln isn’t so innocent. He’s a real ass to anyone who turned a blind eye to his daughter’s disappearance. Using his family’s fortune, he has caused true hardship for many in the town. He’s not just a man in pain and turmoil; he is bent on bring down those around him, sinking to deep lows at times to do so.

The book does have a minor love-interest story, but I feel it plays second fiddle to the mystery and suspense. Jay and Linc have a chance to explore the feelings that developed long-distance over the internet and phone. There is one sex scene; it is quick and hot, which suits the tempo and mood of the novella. However, the couple carries a LOT of baggage, and they have a long way to go before any true romance can play out. So don’t pick up The Innocent expecting a love story – it’s not.

Overall I liked the story. It was engrossing, albeit a little tough at times. As I mentioned, The Innocent really isn’t the romance I was expecting. I liked Jay and Linc together before the maelstrom hits, but they have a lot of issues to work through before they can have a real relationship. The overall mystery of what happened to Linc’s daughter, coupled with the well-developed characters, made this novella an exciting read and one I recommend to fans of suspense stories.

Rating: B  Liked It, Recommend

There’s only one reason Jay Roberts would set foot in a middle-of-nowhere town like Hell, Georgia. She’s got a bone to pick with her sort-of boyfriend. They only met online, but things got hot and heavy before their cyber link went silent.

She’s here to get in his face for an explanation. But no touching. Her psychic abilities make physical contact…complicated. Yet something about this relationship made her think things would be different. She’s not in Hell twenty minutes before bad vibes have her skin crawling.

Corruption has stained the very fabric of Linc Dawson’s town, and now it’s stolen something very dear to him. The last thing he has time for is nursing Jay’s broken heart.

But Jay isn’t going anywhere. Not only because she’s not giving up on him, because she’s got access to the kind of backup nobody wants on their bad side. And Linc discovers the woman who’s afraid to touch him could actually be his best chance. At salvation, at hope, at life. Maybe even love…

6 responses to “Review: The Innocent by Shiloh Walker”