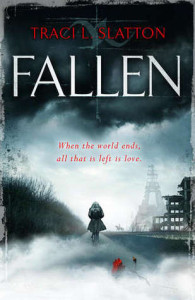 “Let’s go back,” I suggested, before Arthur could kiss me.  He kissed me anyway.

“Have you ever climbed a rock wall?”

“Yes, fun.  It refers to enjoyable experiences that human beings are hardwired to have.  And not just in bed.”

“That’s not fun, that’s duty.  I made a deal and I’m keeping my end of it,” I muttered.  Arthur laughed heartily.

“That’s what you’re telling yourself, Emma?”

“Rock climbing?  As the world ends?”

“The ending is finished.  We’re at the beginning.  And we have this moment, you and I, with no past and no future, no regrets and no worries, just to be together, alone in this beautiful place, enjoying the day.”

“I always have a past and worries.”

“I don’t.”  He went to the horse and reached into the saddlebag, pulled out a strappy thing.  “Put this on.”

“How nice for you, having no past and no worries.  As for me, I have to get back to the children.”

“You have a self without them, don’t you?  Who are you without them?” he asked, a little tartly.  “Can’t you be her, the woman you are within yourself, for a little while right now, with me?”  He laid the strappy thing in my hand.  “I’ve been so lonely.”

“Well, you know, darling, it’s been a lonely apocalypse,” I snapped.

“Put your harness on.”

“You’ve got to be kidding!  I have to get back to the kids!”

“Why, are you on a schedule?  You have to rush back to brush everyone’s teeth?  Your eight darlings are happy in the safe zone, well-fed, and if I know Robert, laughing at some inappropriate song!”

I couldn’t argue with his rationale.  Maybe I didn’t want to.  I let my hand relax, and the strappy thing unfurled into a harness.  “Then we’ll go home?”

“Yes.  And I will make it worth your while at he top.”  His tone was playful.

“Let me show you.”  He held open the belt so that the thigh loops hung down.  I stepped into it.  “Do you know how to belay?”  I shook my head.  He said, “I’ll free-climb up, then belay you from the ledge.  It’s an easy climb, practically a scramble.  Five-five, five-six.  Maybe five-seven at the crux.”

“You expect me to climb up this cliff and stand on a ledge without falling off?”

“I’ll clip you in.”  He shucked off his shirt and kicked off his shoes, indicated that I should take off my shoes, too.  He pulled on his harness.  He ran the coil of rope through his hands very fast, expertly checking it and recoiling it.  He draped it over his bare arm.

“Arthur, I don’t have a self anymore, apart from the children.”

He gave me a sharp glance.  “Yes, you do.  You can’t let yourself be defined by the mists, what the mists have done.  None of us can.  It’s self-indulgence.  If I allow myself to do that, I’d have no choice but to commit suicide.”

His words were quiet, but unexpectedly biting.  I was taken aback.  “Suicide, Arthur?  As drastic as that?”

He didn’t answer.  He tied on one end of the rope onto my harness and then leapt onto the rock face, clinging to it as elegantly as a spider.  “Climbing!  Keep your weight centered over your feet.  Emphasize footholds, not handholds.  Hips close to the rock.”

He was fluid and graceful as he moved up, far more so than his tall, muscular form would suggest.  Above him the sky stretched up  into infinity, endless, fathomless.  I got dizzy looking up, and I swayed.  I put my hands out to keep from falling, and I shuddered as my palms met limestone.  The cliffs here were safe now.  They hadn’t been before.  How many glistening white mists had come forth out of fissures in rock faces just like this, to kill how many billions of men, women, and children?  How did Arthur expect me to forget all that for even a few moments?

“Emma, climb up!  You are on belay!”  Arthur called.  I hopped up and clung to the rock.  The limestone felt cool and rough to my fingers and toes.

“Stand up straight, stay in balance, keep your weight over your feet!” he called.  There was nothing else to do so I ascended.  It took me a lot longer than it took him, and I was helped by the tension in the rope, which ran through bolts in the stone.  Hopeful sprouts of green grew out of small cracks.  The limestone held the sweat left by my hands and grew slippery, so I couldn’t place a hand back where it had been.  Once I changed position, there was no return.  I had to solve the puzzle of the next position.

Arthur was right: it was kind of fun, once I slipped into the rhythm of it.  There were delicate, fingery moves and strenuous, thrusting motions when my feet climbed almost to the height of my waist to find the next foothold.  I was aware of the ground fading beneath me.  Then I was the only aware of my own body and my movement on the rock face; nothing else mattered.  Time slowed down and fell away.  It was just me and the gray rock and the blue sky.  My breath joined up with my heart, for the first time in months.  I was alive again.

Finally, Arthur was puling me up to stand next to him.

“I did it!” I yelled.  I slapped his hand in exultation.

“You weren’t half bad,” he laughed.  “You’re a better climber than rider, that’s for sure.”  He clipped me to another bolt with several loops of rope.  Then he stood next to me.  “So you enjoyed it?  Taking a little break from the usual routine of trying to avoid death, starvation, and attack?”

“I enjoyed not falling to my death.”

“Liar!  You enjoyed climbing.  It puts you in touch with yourself.  My question is, what did you find?”  He was doing it again, staring at me with blazing, intent eyes, trying to see inside me.

“I found my children at my core.”

“Liar again.”  He picked me up and pushed me gently into the cliff face.  “Ready to do your duty?”

“You’re full of lies today.  I always wanted to make love on a ledge,” he murmured, and then proceeded to do just that.  It wasn’t easy with the harnesses on but he was inventive, and he was determined.  It was well worth it.